THE MAN WHO KILLED HITLER AND THEN THE BIGFOOT

"Not Much to Write Home About Despite the Crazy Title" 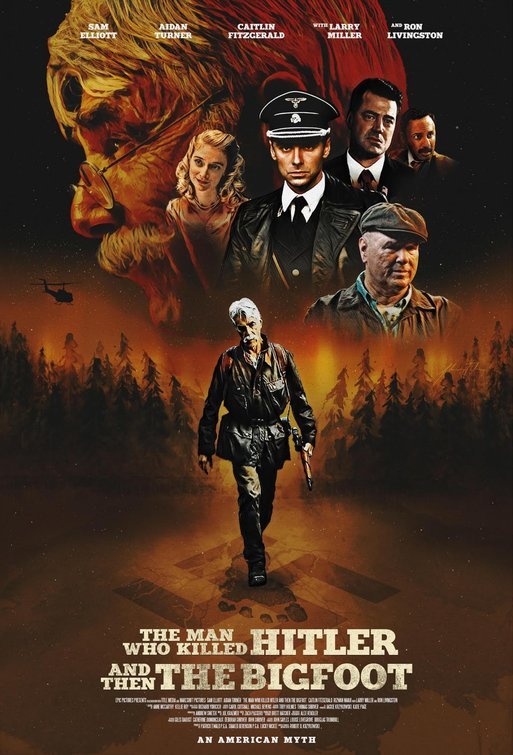 THE MAN WHO KILLED HITLER AND THEN THE BIGFOOT tells the story of Calvin Barr, a spy who posed as a German officer during World War II to assassinate Adolf Hitler. Years later, he’s living a simple life. He spends his time with his dog or at the local bar. After being retired for a long time, men visit his home. They ask him to track down and kill Bigfoot, who’s infected with a deadly disease that could kill millions of people. Calvin must decide to accept this mission or continue his monotonous life at home.

(BB, AP, VV, AA, D, M):
Dominant Worldview and Other Worldview Content/Elements:
Strong moral worldview throughout as the protagonist has spent his life defeating evil in the world, he regrets that he ever had to kill people as it wasn’t anything he ever wanted but did it either in war or for the good of his country, plus minor Anti-American elements as it’s implied the government has been lying to the public and covering up the real story of how Hitler died (he was killed, but the Germans replace him with a Hitler double)
Foul Language:
No foul language, and Bigfoot is shown vomiting onto the main character
Violence:
Moderate amount of violence throughout, a man gets robbed by a few guys but then is able to fight back mostly with hand-to-hand combat, a man is shot while sitting in a chair with the audience view behind the chair and a bit of blood is shown coming from the bullet hole in the chair, a man intentionally cuts another man behind his ear while shaving him, a man falls breaking his pinky finger, and he resets it himself, man fights with “Bigfoot” mostly hand to hand and then eventually stabs the creature a few times, a man’s ear is supposedly bitten off but not very graphic
Sex:
No sexual content
Nudity:
No nudity
Alcohol Use:
Characters are occasionally shown having an alcoholic drink at a bar or in a restaurant, and a man appears to be intoxicated, causing him to bump into a table in a restaurant
Smoking and/or Drug Use and Abuse:
Characters are shown smoking cigarettes or tobacco from a pipe, and a man takes prescription medication, but later throws pills out for a reason that’s not explained; and,
Miscellaneous Immorality:
A hunter picks up feces while tracking a Bigfoot creature and smells it (although it’s very colorful and doesn’t resemble animal or human feces at all, and he comments on the diet of the creature that produced it).

THE MAN WHO KILLED HITLER AND THEN BIGFOOT follows the life of Calvin Barr, in present day and in flashbacks, showing his adventures working for the US government. Back during World War II, he was placed in the war as an undercover agent. Since he spoke fluent German, he posed as a Nazi official. He was in love with a girl, but left for war just as he was about to propose to her. Because his mission was so top secret, he wasn’t permitted to contact her at all, and then, sadly, she died before he returned.

In his present day, he’s alone with his dog, more familiar with the local barkeep rather than his own family. In his past, he was faced with the most important mission of any one soldier in any army in the war. As an undercover German soldier, he tracked the whereabouts of the higher ups in the German army, trying to finally locate and kill their leader, Adolf Hitler. This mission was something he never wanted. Killing a man affects him in a way that he never could have predicted. Even though the person he killed is causing much harm and destruction to many people around the world, he still hasn’t found peace with what he did.

It’s clear that Calvin Barr is a very unique and sensitive person, with not many people in his life to love. One night, two men knock on his door with a proposal. They show him a complete case of what they’ve dealing with in the government and trying to conceal it from the public. There has been a series of killings in one area in the north, with the animals all contracting some type of infectious disease caused by the attacker. They believe the legendary creature, Bigfoot, has contracted some sort of plague that could wipe out millions of people. After contemplating this decision for about five hours, Calvin decides to take on this mission. Suddenly, the audience sees his view through a gun scope, taking a shot at Bigfoot. He is right on his trail, and Calvin has to summon all his strength and training to stop him.

THE MAN WHO KILLED HITLER AND THEN THE BIGFOOT is the first feature for Writer/Director Robert D. Krzykowski. Managing to wrangle in some well-known working actors, that’s about the only thing attracting an audience to this otherwise nonsensical story. The story has many elements that don’t quite come full circle, or just don’t make any logical sense. In a technical aspect, Sam Elliott is meant to have his ear bitten off by Bigfoot, yet after the bite, there are following shots clearly showing both ears well intact. Regrettably, there’s very little in the story that’s compelling enough to keep viewers interested or entertained.

There is very little immorality in this movie, with violent content being the majority of the questionable elements. There are a few scenes including hand-to-hand combat, one gunshot scene, and a cringe-worthy scene where Bigfoot gets sick and vomits. Otherwise, the worldview is primarily moral, as the main character works to defeat creatures or people that are evil and causing destruction to mankind. Although there’s not much to oppose, there’s also not much to like, and with so many wholesome, as well as entertaining, options out there, one might want to venture elsewhere. Caution is advised for older children.

Watch THE MAN WHO KILLED HITLER AND THEN THE BIGFOOT: