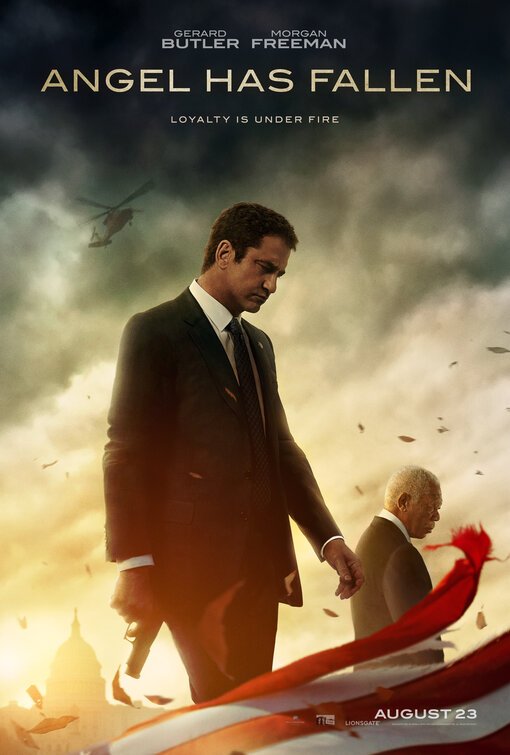 ANGEL HAS FALLEN is the third installment in the thriller series about a Secret Service agent protecting the President of the United States. In the new spy story, Agent Mike Banning must clear his name when he’s framed by a private military contractor for a vicious but failed drone attack on the President, who’s now in a coma. While on the lam, Banning figures out the identity of the military contractor. Can Banning evade the FBI and the country’s police in time to clear his name and expose the real bad guy before the man attacks the President again?

ANGEL HAS FALLEN is another gripping thriller featuring Secret Service Agent Mike Banning, who’s played by Gerard Butler. Butler is perfectly cast as Agent Banning, and he gets wonderful support from a cast of veterans, which includes Morgan Freeman as the President. Nick Nolte gives a particularly engaging performance as Agent Banning’s irascible father. ANGEL HAS FALLEN has a strong moral, patriotic, pro-family worldview. However, the dialogue contains many strong obscenities, and the action violence has a significant amount of graphic violence. So, MOVIEGUIDE® advises extreme caution.

(BB, PP, LLL, VVV, S, N, A, M):
Dominant Worldview and Other Worldview Content/Elements:
Strong moral, patriotic, pro-family worldview in thriller about a Secret Service agent protecting the President from a military contractor with selfish motives, the agent has a loving wife and a new daughter, and during the movie the agent reconciles with his irascible father
Foul Language:
93 obscenities (including many “f” words), five strong profanities and four light exclamatory profanities
Violence:
Lots of intense, very strong and strong action violence include a training exercise with lots of shooting and fighting, dozens of drones bomb and machine gun and kill many agents protecting the President of the United States, many point blank shootings with blood, military people fight each other, an intense knife fight, huge gunfight with blood at the end with men shot dead, many explosions with fire, older man has bomb booby traps around his cabin and triggers the bombs when about 15 bad guys come to kill him and his son, vehicles are rammed, a chase involving a large truck, man driving the truck manages to detach the cab of the truck from the trailer its hauling, cab eventually wrecks, two bad guys threaten woman and her daughter
Sex:
Man comes home and starts kissing his wife in the bed but that’s all that’s shown
Nudity:
Upper male nudity during a comical end credit scene
Alcohol Use:
Brief alcohol use
Smoking and/or Drug Use and Abuse:
No smoking or illegal drugs, but hero takes some pain pills because he suffers from Post-Concussion Syndrome; and,
Miscellaneous Immorality:
Deceit, betrayal, hero is framed for killing Secret Service agents and trying to kill the President of the United States, and father and son are estranged but eventually reconcile.