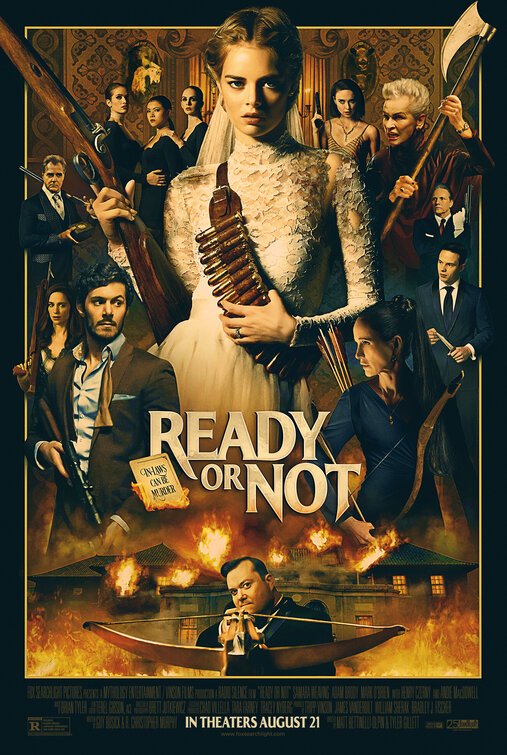 READY OR NOT is a darkly comedic horror thriller. Young Grace is about to marry into the wealthy Le Domas family, who have made a fortune on various games including card and board games. Grace and her new husband, Alex, are interrupted on their wedding night at the family mansion by the family. Alex explains to her that the family requires her to play a game with them at midnight. They enter a huge hidden room filled with old-fashioned weapons. The family asks Grace to pick a card out of a box. She picks a card saying “Ready or Not,” a game where they have to capture Grace by dawn or risk their own destruction. Things get out of hand quickly, with everybody out to kill each other.

READY OR NOT walks a line between bloodshed and dark humor. Before its conclusion, the movie starts to feel redundant. The movie is extremely graphic in its bloodiness, with abundant foul language. Also, it has an ugly undertone that hurts its entertainment values, especially as it plods near the end. READY OR NOT is abhorrent.

(PaPaPa, OO, PCPC, LLL, VVV, S, A, DD, MM):
Dominant Worldview and Other Worldview Content/Elements:
Very strong pagan worldview with survival of the fittest, where a young woman marries into a strange, extremely wealthy family and then learns she has to fight to literally survive her wedding night because they’re secretly murderous occultists, plus heroine makes several comments about rich people being crazy and awful, so the movie has a strong politically correct subtext
Foul Language:
At least 115 obscenities (more than half are “f” words), five strong profanities using Jesus, sic light profanities, one obscene gesture
Violence:
Extremely graphic and bloody violence, often played for dark laughs, includes a woman is accidentally shot in the head and has a huge chunk of her skull blown open with blood all over her face and the floor around her, while the others in her family make arch jokes and then drag her body out of the room, another woman is accidentally shot in the mouth with an arrow to bloody results with similar wisecracks made afterwards, a young boy shoots the heroine in the hand causing a bloody mess, heroine climbs a ladder and slams her hand into a nail at the top, heroine drives the nail through the bullet hole in her hand and then has to pull it out again to very bloody effect, heroine falls from a great height and breaks her other arm, heroine tries to escape through a gate with sharp metal parts and has her back shredded in a long line through her flesh, implied decapitation as an older woman is shown swinging an ax at another woman, woman is crushed in a dumbwaiter with her bones cracking and blood pouring out of her mouth as she dies on-camera, a couple scenes reveal that the people who die playing the game are tossed into a pit like waste, and several characters explode into purely liquid form, with their blood drenching another character and again played for laughs
Sex:
Bride and groom just barely start to try and have sex, still fully clothed, after their vows when they stop abruptly because of seeing an older lady relative secretly watching them
Nudity:
No nudity
Alcohol Use:
Alcohol use
Smoking and/or Drug Use and Abuse:
Brief smoking and a woman is seen snorting cocaine; and,
Miscellaneous Immorality:
Movie has a nasty comic tone where murder and casually cruel comments are the norm, with little respect for human life, and heroine has to be just as ruthless as the people trying to murder her.