"The Play Within the Play" 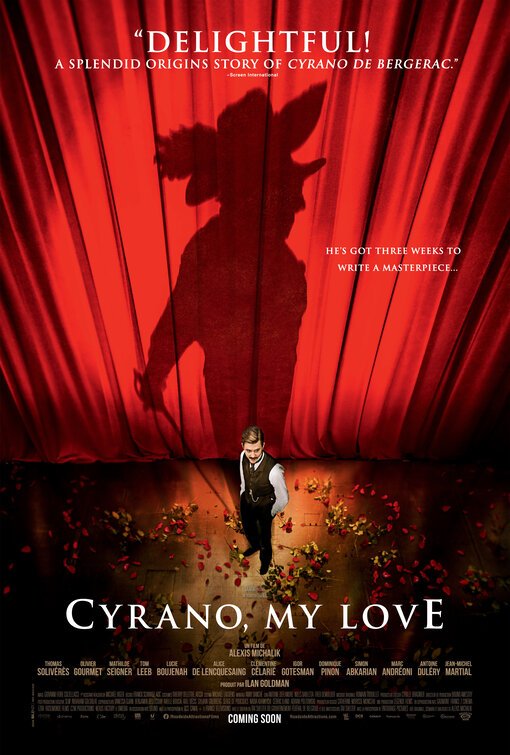 CYRANO, MY LOVE is a French drama about Edmond Rostand, the poet who wrote one well-known play CYRANO DE BERGERAC. Edmond has written other plays that failed. He stumbles upon a man, Christian, fumbling to find the right words to say to his love, Jeanne. When Edmond gives him the right words, Edmond realizes he has another play in him. Studying the poet Cyrano De Bergerac, he creates a play of the same name about a man with a big nose in love with a beautiful woman,. Eventually, the play would be performed over 200,000 times, making it the greatest success in French theater.

Viewers will enjoy the inside look of how the play CYRANO DE BERGERAC came to be. However, many scenes are clearly the work of CGI and definitely not real. That said, the costumes are gorgeous and appropriate for the time period. CYRANO, MY LOVE is relatively clean. It has a light moral worldview promoting taking care of one’s family, but it’s marred by brief nudity and some sensuality. MOVIEGUIDE® advises extreme caution.

(B, V, S, NN, A, D, M): Light moral worldview of loyalty to family and providing for one’s family despite hardship
Foul Language:
No foul language
Violence:
Two scenes of two people fighting with swords (no blood shown), and one scene of a man with a bloody bandage
Sex:
One scene in a house of prostitution with implied sexuality, one scene of a man implying that if a wife isn’t pretty, it’s ok to have an affair (not rebuked), and two people kiss
Nudity:
Upper female nudity in one scene, upper male nudity in one scene, and a scene with women in lingerie in an apparent house of prostitution
Alcohol Use:
Several scenes of people drinking
Smoking and/or Drug Use and Abuse:
Several scenes of people smoking but no drug use; and,
Miscellaneous Immorality:
Some sexism, classism, racism, dysfunctional family portrayals, poor role models.

CYRANO, MY LOVE is a French period drama set in Paris in December 1897. Five years prior, a train crashed into Montparnasse Station, Captain Alfred Dreyfus was just convicted of treason and President Felix Faure had just launched a military operation to conquer Madagascar.

The movie begins as actress Sarah Bernhardt debuting a beautiful verse poem by an unknown poet, Edmond Rostand, whose first work is called “The Distant Princess.” Called a flop by critics, Edmond enlists the help of a café owner, who encourages him to study other poets like Cyrano de Bergerac.

Using Jeanne as a platonic muse, Edmond writes the play. However, when Christian goes to see her and finds she is in love more with his poetry and letters, Christian doesn’t know what to do: Confess he is not the author of the letters or the person who authored the words he spoke to her on that balcony or allow her to love a fake version of himself. At Edmond’s urging, Christian keeps Edmond’s identity a secret, because, without Jeanne, Edmond can’t write any more plays and provide for his family.

Unfortunately, Edmond’s wife finds the letters and kicks him out of the house. Seeking inspiration, Edmond tries to find it through other sources like loose women, but it’s not the same as knowing a woman like Jeanne loved him for his intellect and creativity. When it comes time for the play, the actress originally hired to play Roxanne has to leave Jeanne fill in for her. Christian plays Cyrano and the two fall in love, but this time, Jeanne falls for the real Christian and not a fake imitation. Because of his work, Edmond received the Legion of Honor, and after forty curtain calls, CYRANO became the greatest success in French theater.

Christian viewers will enjoy the movie on the surface as an inside look into how the play CYRANO DE BERGERAC came into existence. On a deeper level, they will wrestle with deeper moral questions such as, “Is it right for a married man to use another woman because she inspires him, or is that the same as having an emotional affair?” and “To what length should a writer go to complete a work he has hidden in his heart?” “Should he risk losing his family?” Viewers will also identify with Christian, a man who’s hopelessly in love with a woman, but who can’t find the words to express how he feels. Using Edmond as his muse, Christian is able to express himself, and, consequently, Jeanne falls for him. Christian’s character will resonate with any viewer who’s wrestled with who they truly are as opposed to how others perceive them.

The movie’s artistry could have been more convincing. Several scenes use sets that clearly revealed green screens and other computer-generated tricks to recreate Paris in 1895. Fake mustaches and other fake makeup donned the faces of the cast, leaving much to be desired in terms of cinematography and make-up. That said, the costumes are beautiful and really reflect the movie’s time period.

CYRANO, MY LOVE is relatively clean. There is no foul language and no major violence, besides the occasional scene in a play of battling with swords. Two scenes of sensuality along brief female nudity are about the only objectionable things. MOVIEGUIDE® advises extreme caution.