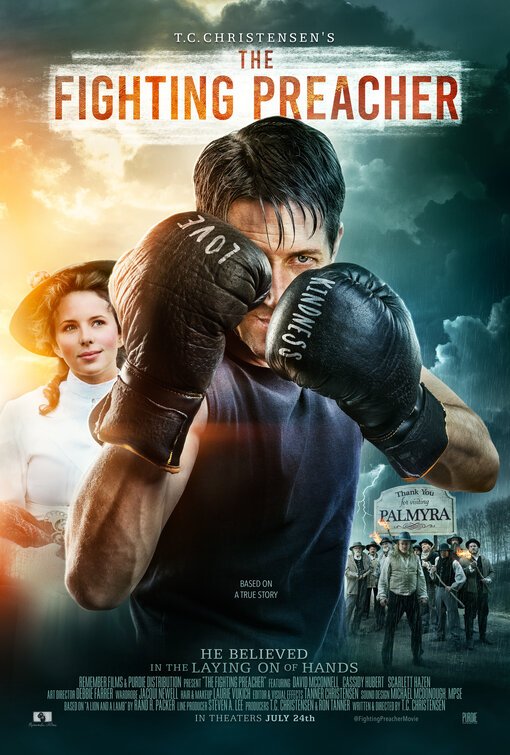 THE FIGHTING PREACHER is a period drama about a Mormon missionary in upstate New York. In 1915, Willard Bean, a former professional boxer, and his wife are called to acquire land in Palmyra and become Mormon missionaries. However, the townspeople are not welcoming. Willard’s family receive mockery, threats and isolation because of their faith. After six years, their daughter is bullied at school. Not knowing what to do, Willard tries to prove he can’t be knocked down by entering the boxing ring again. When unsuccessful, Willard and his family come up with a new tactic. Why not punch out the town with love instead of violence?

THE FIGHTING PREACHER has good production values, with the use of props, costumes and homes characteristic of the day. It’s also well-acted. People who have been bullied or persecution for their beliefs will relate to the movie’s story and characters. Except for some fighting and boxing, the movie is relatively clean. However, THE FIGHTING PREACHER has a strong, false Mormon worldview. People pray to Joseph Smith, who called himself the American Muhammad, instead of to Jesus Christ.

(FRFRFR, RHRHRH, C, B, VV, M) Very strong syncretistic, false Mormon theology in a historical story about a boxer turned Mormon preacher and his family being ostracized and harassed in the early 1900s by the people of Palmyra, New York, the original town where the charlatan and con man Joseph Smith, who created the false Mormon faith and called himself the American Muhammad, invoking another murderous, cult leader, Mormon family heretically prays to their dead “Prophet,” Joseph Smith, instead of Jesus Christ and their prayers seem to be answered, Mormons falsely claim Joseph Smith was anointed as a prophet by Jesus, baptism is depicted as necessary for salvation when it’s just an outward sign of one’s faith in Jesus and regeneration and transformation by the Holy Spirit, a passage about a false revisionist Ancient Jewish history from the Book of Mormon is quoted, with some Christian sounding references and morally uplifting elements about treating others with love and kindness to win them over
Foul Language:
No obscenities or profanities
Violence:
Moderate level of violence including two scenes of someone threatening to shoot another with a gun, several scenes of one person punching someone in the face, a young girl being shoved to the ground, some boxing scenes, one scene of one person being pushed into a river, one scene of someone being sprayed with a hose in the face
Sex:
No sex scenes or sexual immorality (two scenes of a husband and wife kissing)
Nudity:
No nudity
Alcohol Use:
No alcohol use
Smoking and/or Drug Use and Abuse:
No smoking, tobacco or drugs; and,
Miscellaneous Immorality:
Low level of miscellaneous immorality includes bullying, name calling, persecution, harassment.

From director T.C. Christensen, THE FIGHTING PREACHER is the true story about Willard Bean, who became a champion middle-weight boxer in 1905. Ten years later, Willard and his new wife, Rebecca, are called by the Mormon Church to live on the Joseph Smith farm the church has just recently possessed. It is in New York where he and his family will become missionaries to the town for five years and re-establish the church in that area.

Since this is an already hostile area toward Mormons, Willard and his family face many challenges. Rebecca can’t find anyone to help her deliver her baby. She has intruders who lie to find their way into her home, only to taunt her with alleged lies about Joseph Smith. Willard gets harassed everywhere he goes, with men shouting in his face about what a horrible person he is for being a Mormon. At one point, he’s sprayed in the face with a hose because Mormons believe in “baptism by immersion.”

Tired of the bullying, Willard punches a man in the face and continues to punch others who do the same. At one point, he tells a group of men he’s going to strike them blind, then punches each eye and runs away.

All throughout these trials, however, Rebecca and Willard remain steadfast in their Mormon faith. When asked to acquire some land to build a church there in Palmyra, the harassment still continues. They pray and ask the Prophet Joseph to provide for them and protect them. Soon, a midwife knocks on their door and tells her she will help deliver their baby. When Rebecca delivers a beautiful baby girl, they name her Palmyra, after the town to demonstrate she’s been a gift from the Prophet.

Meanwhile, Palmyra is being bullied at school, and the teacher puts her desk in the far corner of the room away from the other children. The neighbors hate them, and the Beans are being asked to leave town. Questioning the Prophet about what he can do to spread the love He believes to those he meets, Willard returns to the boxing ring to show the town they shouldn’t mess with him. He invites the town to go into the ring with him and try to knock him out in three rounds.

Of course, the town loves a chance to knock out the “idiot” Mormon. However, they quickly realize Willard’s not someone to take lightly! Donned “the fighting preacher,” the town hates him more because they were defeated. With one act of kindness after another, Willard and family teach the town that sometimes the battles we fight can only be won by one thing – love. Slowly, as they learn to love the man whose views they don’t understand or agree with, a town’s lives are changed.

One of the biggest issues Christians will have with this movie is the overt Mormon theology pervasive throughout the movie. In one scene, mockers lie and ask to see Rebecca’s home to learn about Joseph Smith. She begins by saying their home is the place where Joseph Smith allegedly brought the plates he received from the angel Moroni. As they taunt her, she bears testimony that Joseph Smith was a prophet of Jesus, who preached a gospel of love and forgiveness. In fact, Joseph Smith called himself American Muhammad, invoking another murderous, cult leader. Rebecca also gives a testimony later on in the movie, where she recounts a vision where, after a long day of work, a handsome man was sent to her. The man visits Elder Talmidge and the two talk. When she says goodbye to him, she claims it’s Jesus who stands before her. Jesus says to her, “If you go about your work every day, as you have this day, you will be equal to it.” The end credits also highlight a verse from the book of Mormon, Jacob 7:26, which is about a Jewish Mormon sect in ancient times allegedly being cast out of Jerusalem and being hated by their fellow Jews. Although the overarching lesson about love and transforming a town through kindness is wonderful, moviegoers should be warned about the false theology espoused throughout the movie. Christians should exercise caution before viewing this movie. Not because of its interesting plot or clean content, but because of the false theology where Mormonism is equated with Historical, Biblical Christianity.

Lovers of historical novels and other historical TV shows like WHEN CALLS THE HEART will enjoy the historic setting of this movie. Set in New York in the early 1900s, people will love the costume design, props like wagons and horses, and the simplistic lifestyle that permeated the times. Rustic character homes with old wooden tables and chairs and potbelly stoves will transport any viewer back in time. The lush, rolling hills and beautiful trees accentuate the landscape and remind viewers of the location of the setting. David Shawn McConnell and Cassidy Hubert do a wonderful job portraying the real-life couple Willard and Rebecca Bean. Their onscreen chemistry is believable and the little girl who plays their daughter Palmyra is beautiful and also does a great job of playing an ostracized little girl whose loneliness drives her to show kindness in the midst of adversity.

THE FIGHTING PREACHER is a clean, family-friendly movie, with its major issues being the false Mormon theology and history and the violence. Because Willard is a boxer, there are many scenes not only of sports related violence, but also violence outside the ring. Willard punches many people in the face to protect himself and his family. Also, their 6-year-old daughter is shoved and ostracized by her teacher and peers. Any Christians who has been persecuted for the faith will be able to relate to the plot of THE FIGHTING PREACHER, but the false theology and false history make this movie deceptive and unacceptable.