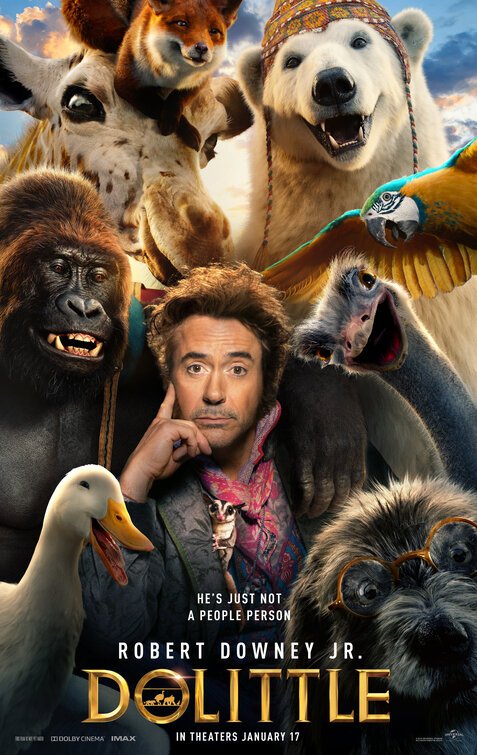 DOLITTLE is a charming, funny, heartwarming family movie based on the Doctor Dolittle book series. Dr. Dolittle emerges from seclusion to find an antidote for the Queen of England, who’s been poisoned. Dolittle places a dog and a stick bug near the Queen while he and the rest of the gang venture to Monteverdi, a city where Dolittle’s late wife’s journal resides. Her journal is the key to finding the Eden Tree, which may heal the Queen. However, some characters don’t want Dolittle to succeed and try to thwart his mission.

DOLITTLE is imaginative and charming. The pacing is upbeat, with many engaging interactions. DOLITTLE is also extremely well-cast, with Robert Downey, Jr. leading the charge. DOLITTLE features a strong Christian, morally uplifting worldview promoting marriage, helping others, friendship, and teamwork. Set in a Christian world, the movie includes references to Eden and scenes where a man appears to pray and someone says, “Thanks be to God.” MOVIEGUIDE® advises light caution for pre-teenage children because of some action violence, brief, light foul language and some light environmentalist elements and pagan elements.

(CC, BB, E, Pa, L, VV, M):
Dominant Worldview and Other Worldview Content/Elements:
Strong Christian, morally uplifting worldview stressing marriage, helping others, friendship, and teamwork, one character also puts aside his grudge because of the love he has for his daughter, Christian elements include references to the “Eden” Tree (which possesses healing powers), a character is read the last rites, and someone says, “Thanks be to God,” and Dolittle lights a candle and appears to pray in front of his late wife’s photo, plus some light environmentalist elements include a concentration on helping animals instead of killing them, and some scenes where characters have costumes and face-paint that’s pagan-like,
Foul Language:
Two OMG’s, one “butt,” one By God, one “d” word, one “Oh my heavens, one heck, a dragon character passes gas and vomits on other characters, and implied vomiting
Violence:
Moderate action and comic violence, such as an octopus chokes someone, mice hit one another while playing chess, polar bear hits an ostrich, boy risks his life to come aboard a moving ship, tiger tries to eat a man, a gorilla fights a tiger, dragon kills villains, but it isn’t shown, a hunting scene, but it’s not graphic, and British troops fire guns and cannons
Sex:
No sex, tween character kisses a boy on the cheek to show gratitude
Nudity:
Naturalistic animal nudity, gorilla shows his backside in one scene
Alcohol Use:
Characters sip drinks out of chalices at a banquet, but it’s not clear that it’s alcoholic
Smoking and/or Drug Use and Abuse:
No smoking or illegal/hallucinogenic drugs, but a character poisoned, and doctor finds an antidote from a tree, and animals drug a doctor to clean up;
Miscellaneous Immorality:
Sarcasm, a few scenes with quick name-calling, brief dialogue about placing bets on a fight, mention of revenge, but ultimately the character turns from it, a Queen is rude to a priest, title character Dolittle seems a little callous toward humans and their ways because he hasn’t interacted with them for so long, and some light adult-oriented humor that children won’t understand because it’s subtle, such as one character says, “Your feathers have filled out,” a polar bear says, “My dad went out for a pack of seals one day and never came home,” and some whales “flip” others off.

DOLITTLE is a sweet family movie based on the Doctor Dolittle book series for children. In the movie, Dr. Dolittle emerges from seclusion to help find an antidote for the teenage Queen of England who’s been poisoned. Imaginative and fast-paced, DOLITTLE features a strong Christian, morally uplifting moral worldview stressing marriage, helping others, friendship, teamwork, prayer, and faith.

The movie begins with an animated sequence about the backstory of Dr. Dolittle. Dolittle along with his wife, Lily, loved traveling the world together helping to heal animals. One day, Lily went out on a voyage at sea by herself while Dolittle cared for the animals, but her ship wrecked, and she died. Previously, the Queen of England gave Dolittle an estate for him and Lily to live and work, but after Lily’s death, Dolittle became a recluse with the animals in his care.

Cut to present day. One afternoon, a young boy name Tommy Stubbins goes out hunting with his relatives. However, Tommy doesn’t want to harm animals and purposefully misses shooting a duck but grazes a squirrel instead. Desperate to find help, a parrot named Poly (played by Emma Thompson, who narrates the movie) guides Tommy to the estate of Dr. Dolittle.

At the front door, Tommy finds Lady Rose, a young girl who has an urgent message about the Queen’s health. After some convincing by Dolittle’s animals, Dolittle saves the squirrel and hears that the Queen is on her deathbed. If she dies, Dolittle will lose his estate, and the animals will have nowhere to go.

Reluctantly, Dolittle, his animal pals, Tommy, and Lady Rose travel to Buckingham Palace. Dolittle finds his old school mate, Dr. Blair Mudfly, attending to the queen. Mudfly isn’t fond of Dolittle’s antics because Dolittle always outshines him. Dolittle does so once again and finds out that the Queen has been poisoned. The only antidote for her health is at the magical Eden Tree which is across the sea.

Dolittle places Jip, a dog, and a stick bug, near the Queen while he and the rest of the gang venture to Monteverdi, a city where Dolittle’s late wife’s journal resides. Lily’s journal is the key to finding the Eden Tree. However, Lord Thomas Badgley doesn’t want Dolittle to be successful and asks Dr. Blair to follow Dolittle and thwart his mission to help the Queen.

At first, Dolittle doesn’t let Tommy accompany him. However, Poly convinces him to get to Dolittle’s ship just in time for their voyage! Tommy spends the trip trying to learn from Dolittle how to talk to the animals. When they make it to Monteverdi to get Lily’s journal, they run into some trouble with jungle cats and Lily’s father, King Rassouli (Antonio Banderas), who’s not a fan of Dr. Dolittle. Meanwhile, Dr. Blair is hot on their trail.

With all the chaos at play, Dolittle and his gang of misfit friends must band together and remember the purpose to their voyage. At the same time, Dolittle’s travels help him work through his grief in a more therapeutic way than staying behind closed doors at his estate ever could.

DOLITTLE is funny, imaginative, charming and heartwarming, with great production values. The pacing is fun and upbeat, with lots of action and story to keep viewers engaged. Also, DOLITTLE is extremely well-cast, with Robert Downey, Jr. leading the charge. However, Downey’s accent is sometimes a little hard to follow and requires viewers to play close attention. Older movie-versed viewers will also appreciate the movie’s subtle nod to classic movies with some quick dialogue. Like most children’s movies today, it’s important for parents to know that filmmakers slip in some adult humor under the cover of animal jokes. For instance, one character says, “Your feathers have filled out,” a polar bear character says, “My dad went out for a pack of seals one day and never came home,” and some whales “flip” others off.

DOLITTLE features a strong Christian, morally uplifting moral worldview stressing marriage, helping others, friendship, and teamwork. One character also puts aside his grudge because of the love he has for his daughter. Even better, the movie has some positive Christian elements. For example, the “Eden” Tree possesses healing powers. Also, one scene involves reading someone the last rites, and a character says, “Thanks be to God.” Finally, Dolittle lights a candle and seems to pray in front of a photo of his beloved late wife, Lily. One scene that might make Christians uncomfortable involves a Queen being rude to a priest. DOLITTLE also contains some light environmentalist elements with a concentration on helping animals instead of killing them and some light pagan elements.

Due to some action violence, brief but light foul language and other minor elements, MOVIEGUIDE® advises caution for pre-adolescent children.