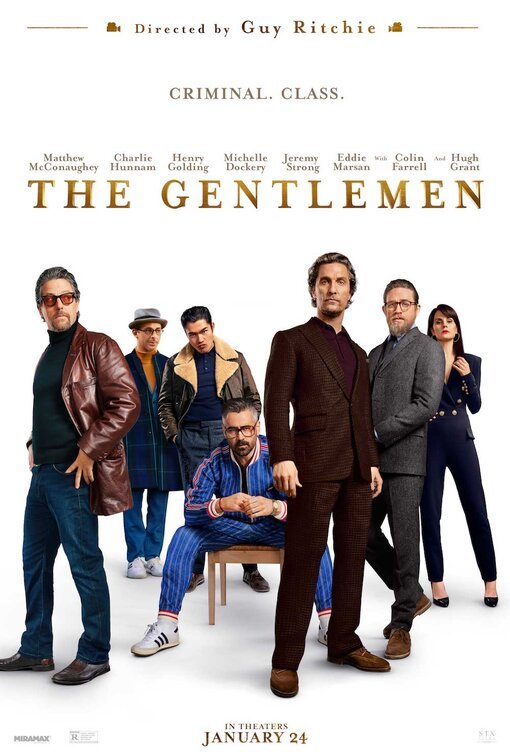 THE GENTLEMEN tells the story of Mickey Pearson, a marijuana drug lord in England who wants to get out of the business by selling it. However, after taking his first bidder to one of his underground farms, some young criminals rob that exact farm. This sparks a seemingly endless trail of people looking to betray Mickey and take his empire for less than it’s worth. Mickey and his allies must find the guilty parties and restore order to this twisted world.

THE GENTLEMEN is told in a very similar way to most of Director Guy Ritchie’s crime movies, sticking to what his fans want to see. There are gangsters, betrayal, drugs, and blood, not without a little comedic relief to keep the story a bit lighter. However, although it’s an entertaining movie, the subject matter contains lots of immorality. The moral values are relative. The characters decide what is right and wrong, mostly based on their own personal desires. Because of its immoral worldview, as well as its excessive foul language and violence, media-wise moviegoers will find THE GENTLEMEN pretty irredeemable.

(PaPaPa, HoHo, LLL, VVV, S, N, A, DDD, MMM):
Dominant Worldview and Other Worldview Content/Elements:
Very strong immoral pagan worldview where it’s up to whoever is the most powerful to distribute punishment where they see fit, the antagonist tries to upset the “natural order” of this world, and the protagonist and his team take it upon themselves to set things straight, plus overt homosexual references where one main male character constantly comes onto another male character, once even asking if he can go to bed with him, and another brief part of the storyline shows a different man being outed as gay in the newspapers, which causes his wife to leave him
Foul Language:
At least 201 obscenities (mostly “f” words), two profanities, one scene includes intense projectile vomiting, some obscene gestures, a few racial slurs, and one scene where a man urinates on the dead body of another man who’s just been killed
Violence:
Extreme violence throughout involving many gunfights, blood and hand to hand combat, a man uses a machete as his weapon of choice showing some blood, corpses are shown in the freezer in a few different shots that can be disturbing, a few killings done by direct headshot, a hand to hand struggle results in someone falling many stories onto the concrete, a man jumps off a bridge to escape causing him to be run over by a moving train, one major car crash, and a man is threatened that he must give a “pound of flesh” to repay his wrongdoings
Sex:
Some sexual content, mostly involving a few inappropriate comments regarding sexual acts, a wife grabs her husband’s genitals over his pants while flirting, it’s insinuated that a man was videotaped having sexual relations with a pig, one brief scene that appears to be leading toward rape but is stopped very quickly, and overt homosexual references
Nudity:
Men are shown shirtless and wearing aprons a few times
Alcohol Use:
Characters are seen with alcoholic drinks throughout the movie, but no apparent drunkenness
Smoking and/or Drug Use and Abuse:
Major drug content, as the entire storyline revolves around a marijuana empire in England, and some of it is the battle between the marijuana crew and the people who make and sell heroin in the same city, one extensive scene where four young adults are shown to be heroin users, one girl eventually dies from it, a man’s tea is poisoned causing him to projectile vomit multiple times, heroin is shown being prepared in a spoon but not shown being consumed, characters are shown smoking cigars and cigarettes throughout the movie;
Miscellaneous Immorality:
Moral relativism as the lead man in the marijuana business is shown sort of as the “good guy,” and others are bad, examples of people trying to bribe other people to get what they want, a group of young men who study fighting make videos where they break into places stealing what is there, and they use their training to beat up other people, some elements of racism as different racial slurs are used multiple times, major themes involving revenge as one man sets out to get back at all the people who have tried to take advantage of him and his business, and one example of blackmail where the group of young men drug someone and record him having sex with a pig (not shown) and threaten to release it if he doesn’t do what they want.

THE GENTLEMEN begins as a man named Fletcher arrives at Ray’s house uninvited and begins to pitch him a screenplay. Fletcher is a private detective in England who makes it his mission to uncover dirt on the wealthy and threatens to expose it unless he’s properly paid. Ray is the right-hand man to Mickey Pearson, the marijuana lord in all of England. He has spent years developing this dynasty in which he grows and sells this illegal drug, taking the farms underground so they’ll never be detected by the law or anyone else. However, Mickey’s grown older and now tired of this business and wants to sell it off to someone with more motivation to keep it going. His wife, Rosalind, runs a female auto shop. Although she has always supported him in his endeavors, she also supports his decision to leave and spend more time with her.

Mickey has set his price quite high, but he already has a few bidders. One of those people interested is a man named Matthew, a well-to-do businessman from Oklahoma, eager to cash in on this empire. Mickey takes the time to show him one of his underground marijuana farms, as well as a few of his above ground connections that distribute for him. Although intrigued, he’s not so keen on the price and needs some time to get it all together.

Out of the blue, and never been done before, that exact farm that was shown to Matthew now has a van of young men breaking into it. They all wear brightly colored plaid track suits and ski masks to cover their faces, although they also carry with them cameras and phones to record what they do. As they enter into the underground marijuana bunker, they are greeted by multiple guards put there to protect the product. However, the guards aren’t expecting that these young men are highly trained fighters, and the young men easily take them out one by one.

Ray enters into a room where he finds Mickey and his wife Rosalind. After excusing his intrusion, he shows Mickey a video that he found online that shows these young men easily overpowering Mickey’s men, and then stealing loads of product. Mickey snaps into crisis mode, and they begin working to figure out how this could have happened.

As Fletcher tells this whole story to Ray, because everything that happened is part of his screenplay. Fletcher fancies himself a clever man and continues with what comes next.

Now, a few new characters in this story. Coach, the man who trains all these young hoodlums who make videos of themselves committing crimes, finds out that their latest endeavor has involved the marijuana lord, Mickey Pearson. Coach finds his way to Ray. Coach admits to Ray that it was his students who committed this crime, and so he now offers his services in order to repay the debt. Coach has already taken it upon himself to capture the man who gave the information of the farm’s location to his boys, and takes Ray to his car trunk, where he has him held. This man is a bodyguard to a man who goes by the name of Dry Eye, and works with the local heroin drug lord making and distributing this heinous substance. But before they can get any information out of him, he throws himself over a bridge to escape their grasp, only to find himself directly underneath a fast moving train.

Mickey and Ray make a visit to his boss, Lord George, where they have preemptively has his tea poisoned. Threatening him with his life and his thriving business, Lord George knows that he dares not ever mess with Mickey’s dynasty again.

Back at Ray’s house, Fletcher is revealing some new information to Ray, showing him photos and video evidence of the mutiny that was happening behind their backs. While Ray and some others were making a rescue of a young girl who belonged to a wealthy family, there was one casualty while dealing with a few of the heroin addicts with whom she mixed herself up. This young man was the son of an ex-KGB member, someone not to be crossed. Mickey, Ray and his other allies have a huge mess to clean up, and still need to figure out who it was that started this chaos. Mickey takes it upon himself to restore order to his empire and punish those who have wronged him.

This movie follows suit to the Guy Ritchie style of filmmaking, including gangsters, intrigue, and many unexpected twists and turns. Although it can be intense, there is also quite a bit of comedic relief to ease the audience through the story. With an all-star cast like this one, it’s hard to have it go wrong. However, there is an extremely high amount of questionable content, including crass language and excessive blood, violence and gore. The worldview is primarily humanist with man being the governing force that creates the rules and then enforces them. Because of the little redeeming qualities, Movieguide advises to approach this movie with extreme caution.