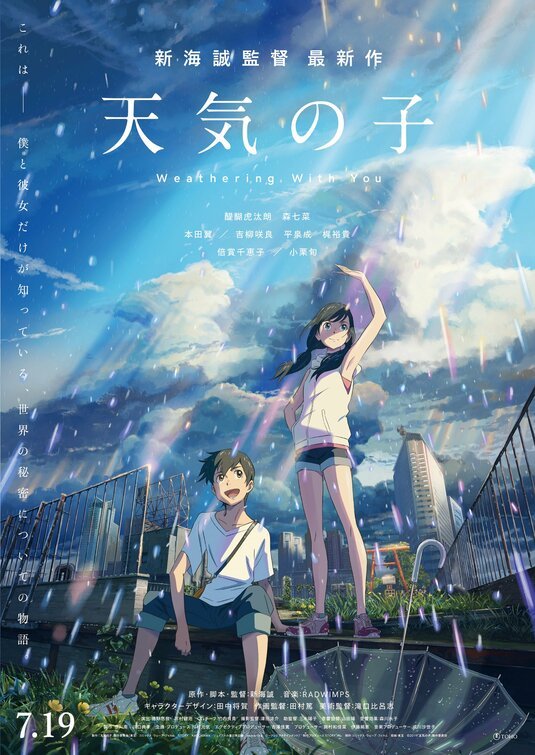 WEATHERING WITH YOU is an animated Japanese fantasy about a teenage boy who runs away to Tokyo and falls in love with a teenage girl who can control the weather. A constant rain is impacting Tokyo, but the teenage girl has supernatural power to stop the rain and bring sunshine. With help from a psychic, the boy discovers that the girl is a weather maiden, a human manifestation of the female fox god who can control the weather. However, he and the girl discover that she must sacrifice her life, or the rain will never stop.

WEATHERING WITH YOU is a well-written, often sweet love story. It has some nice, peaceful and beautifully pleasing animation. The main characters are kind and caring underdogs who work hard, in a sincere way, to overcome their struggles. However, the story holds up human love as the most powerful form of love. WEATHERING WITH YOU also has a strong mixed worldview with a strong, false, dangerous, and evil theology involving pagan human sacrifice. The God of the Bible repeatedly and thoroughly condemns such false pagan theology.

(PaPaPa, RoRoRo, FRFRFR, B, EE, O, L, VV, S, N, AA, D, M):
Dominant Worldview and Other Worldview Content/Elements:
Very strong mixed pagan worldview with very strong Romantic elements and very strong Eastern, false mythology/religion and Japanese folklore where a teenage boy loves a teenage girl so much that he must steal her away from the sky, the boy and girl are poor victims of a society that can be cruel, but they are resilient, the teenage girl is a weather maiden that’s a human manifestation of the fox god in Shinto Buddhism, who can control the weather and bring sunshine out of rain, but a weather maiden must eventually become a human sacrifice to make the constant rain go away, mixed with some light moral elements where characters display kindness and compassion toward others and mixed with some allegorical but mysterious environmentalist elements regarding the disastrous weather conditions affecting the movie’s characters, plus some light occult elements that includes a minor character who’s a psychic
Foul Language:
Five obscenities and a few lewd but light references to female bodies, such as a reference to “boobs”
Violence:
Strong violence when teenage boy is beaten up by strip club goons and police a few times, with some light gun violence (but no one is shot), and stormy weather threatens characters
Sex:
Teenage boy rescues teenage girl from strip club promoters trying to hire young women, teenage boy caught looking at young women’s bodies a couple times (one accuses him of looking at her breasts), a few lewd references to female bodies, teenagers begin a romance, and teenage boy thinks an older man and younger woman are in an illicit relationship
Nudity:
Brief scene where two teenage boys are in a bathtub, but not in a sexual way, a teenage girl pulls her robe off of her upper body to show she’s becoming transparent
Alcohol Use:
A main character is shown drinking alcohol frequently, plus drunk and passed out
Smoking and/or Drug Use and Abuse:
A main character smokes;
Miscellaneous Immorality:
Gambling mentioned.

WEATHERING WITH YOU is a story about a 16-year-old boy, Hodaka, who runs away from his island home in Japan. Hodaka makes his way to Tokyo, where it has been raining for two months straight. The weather forecast calls for at least another month of rain.

Hodaka is unable to find a job and soon finds himself living in the streets. He is taken in by Mr. Suga. Mr. Suga hires Hodaka to write for his magazine on urban legends in exchange for room and board. Hodaka is teamed up with Suga’s niece, Natsumi. Their assignment is to find a “sunshine girl.” A psychic tells them a sunshine girl is a weather maiden, a human manifestation of the “fox god” from Shinto Buddhist mythology and folklore who can control the weather, causing sunshine or storms. The fox god is seen as one of the seven lucky spirits, but, eventually, the weather maiden must become a human sacrifice to satisfy the sky.

Hodaka encounters Hina on the streets of Tokyo where she’s being seduced by sex traffickers at a sketchy club looking for female hostesses. He remembers Hina as the girl who gave him a sandwich when he was starving and homeless. By gunpoint, he rescues her from the sex traffickers. The two form a fast friendship. Hodaka helps Hina recognize that she’s a sunshine girl. The sky will always answer her prayer. He helps her to create a business where she earns a good deal of money by praying for sunshine. People hire her so that the sun will shine on their various outdoor events.

Hina’s business soon is thriving. However, it becomes overwhelming, and the two decide to call it quits so that Hina can recover. It is too late. Hina’s supernatural gift has taken its toll on her. She is becoming transparent and disappearing. She discovers that a sunshine girl’s destiny is to be a human sacrifice. If she does not die, the sun will never shine again.

Meanwhile, Tokyo begins to sink in the ocean due to the endless rains. Hina agrees to save Tokyo by sacrificing herself to the sky. She travels to a different dimension where she’s engulfed in clouds, rain and darkness. Once Hodaka discovers what has happened, it’s it is too late.

Hodaka can’t accept the sacrifice of Hina. He does everything he can to get to the sky where she is, including an attempted murder and suicide. Can he rescue her and be with her?

WEATHERING WITH YOU is a well-written love story, with peaceful and pleasing anime graphics. The main characters are kind and caring underdogs who work hard to overcome their struggles in a sincere way. The problem is, the story holds up human love as the highest and most powerful form of love. In addition, the two lovers are in some ways victims of an uncaring society. Finally, the movie is based on false, abhorrent Shinto Buddhist mythology and folklore involving a weather maiden who can control the weather and a human manifestation of the female fox god who must eventually be sacrificed to appease the sky. This is a sharp contrast to the Christian belief that Jesus is the personal and divine source and summit of love who dies for our sins but rose from the dead to ensure salvation and eternal life for all who trust in Him. WEATHERING WITH YOU also contains brief foul language and some sexual references. The God of the Bible repeatedly and thoroughly condemns the kind of pagan human sacrifice taking place in WEATHERING WITH YOU.