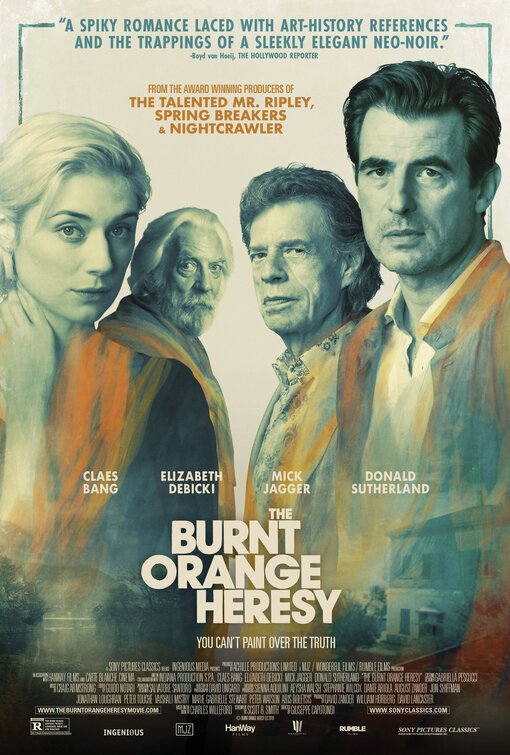 THE BURNT ORANGE HERESY is a brilliant psychological thriller. A rich art collector invites James, a down on his luck art critic, to his villa on Lake Como. James takes his latest romantic conquest, a tall, smart, pretty blonde, along for the weekend. At the villa, the art collector blackmails James into trying to entice an acclaimed but reclusive elderly painter living in the collector’s guest house to give him one of the new paintings he’s painted. The painter turns out to be a charming but irascible old man. A shocking revelation about what he’s really been doing leads to arson, fraud and murder.

THE BURNT ORANGE HERESY plays like a modernized 90-minute filmed version of an episode of Alfred Hitchcock’s old television series. The script is brilliant and provocative. It sizzles with electrifying attacks on the empty nature of much of what passes for modern art criticism. As the elderly painter, Donald Sutherland adds a playful performance that drives this point home. MOVIEGUIDE® advises extreme caution, because of some strong foul language and an explicit bedroom scene in the first act.

(B, LL, VV, SS, NN, A, DD, MM):
Dominant Worldview and Other Worldview Content/Elements:
Light, somewhat ironic moral worldview in a psychological thriller that exposes the chicanery and emptiness of the modern art world, with a story that leads to arson, fraud and murder, but the villain forgets one detail that could trip him up
Foul Language:
12 obscenities (mostly “f” words) and no profanities
Violence:
Strong violence includes a character struggles with another character and holds their head under water until they appear to have drowned, a character fatally hits anther character in the head with a hard ashtray (the actual impact isn’t shown, just heard), a character deliberately sets fire to an art studio as part of a plot to commit fraud, and a character attaches a large rock to a rug containing a dead body and sinks the hidden body into a lake
Sex:
Depicted fornication and partially depicted oral sex in a lengthy bedroom scene
Nudity:
Upper female nudity, rear male nudity and upper male nudity in bedroom scene, plus upper male nudity in a couple other scenes, including one scene where a man takes a bath
Alcohol Use:
Alcohol use
Smoking and/or Drug Use and Abuse:
Smoking, man offers a woman a speed pill, and they both take one, and later the man is seen using them often, which prompts the woman to question him about his addiction, whereupon the man says he can quit any time he wants, but his words aren’t convincing; and,
Miscellaneous Immorality:
Fraud, stealing, deceit.

THE BURNT ORANGE HERESY is a psychological thriller about an English art critic who’s blackmailed by an art collector in Italy to entice an acclaimed but reclusive elderly painter living in the collector’s guest house to give him one of the secret new paintings he’s painted. The situation leads to arson, fraud and murder. THE BURNT ORANGE HERESY has a brilliant, provocative script about the nature of art and art criticism, with several great plot twists, but the movie’s marred by some strong foul language and an explicit bedroom scene, both of which add nothing to the story.

Based on a book by late crime fiction novelist Charles Willeford, the movie opens in Milan with art critic James Figueras lecturing some tourists about art. He shows them an unimpressive abstract painting and then tells them an emotional story about a Jewish painter and his sister who were put in a concentration camp by the Nazis during World War II. The story changes their perspective on the painting, but then James tells them that the story he related wasn’t true. Beware what art critics say, James says, because they can lie to you and manipulate your thoughts and reactions.

At the lecture, James is taken with the attitude of a pretty young blonde woman in the audience, who seems more savvy than the other attendees. James invites Berenice to dinner, and she eventually spends the night at his place.

The next morning, she’s prepared to leave, never to see him again, but James invites her with him to a weekend getaway at a rich art collector’s villa on Lake Como. James expects the art collector, Joseph Cassidy, will have a lucrative proposal for James, and he could use the money that’s probably involved. Sure enough, Cassidy tells James that the reclusive painter, Jerome Debney, has been staying at his guest house. Debney has been a total recluse since 1968, when a fire destroyed his life’s work. Cassidy promises James he can have an interview with Debney if he promises to entice Debney into giving Cassidy one of his new paintings. If James doesn’t agree, Cassidy will reveal some information about James that will hurt his career even further.

The elderly Debney eventually makes an appearance and has an engaging conversation with James and Berenice. He turns out to be a charming, friendly and even wise old man. Debney’s particularly entranced by Berenice, and the two take a walk together when James has to leave to do some writing. In reality, James is suffering from exhaustion because of his addiction to amphetamine pills, a stimulant.

That night, Debney invites them to dinner at the guest house. After dinner, he decides to let them see his studio where he paints. James and Berenice are astonished to see what Debney’s really been doing all these years. His shocking, ironic revelation ultimately leads to arson, fraud and murder.

THE BURNT ORANGE HERESY plays like a modernized 90-minute filmed version of an episode of Alfred Hitchcock’s old television series. The script is brilliant and provocative, laced with great insights into art, art theory and art criticism. The dialogue often sizzles with electrifying attacks on the empty nature of much of what passes for modern art criticism. The artist’s ironic, shocking revelation when he shows James and Berenice his studio puts the icing on this biting satirical attack. Donald Sutherland adds a wry smile in this scene that drives the point home.

As with many of Hitchcock’s stories on his series, the ending delivers two more final twists. The movie’s last shot adds a sad, but deeply moving, coda to this story of intellectual pomposity, fraud, murder, and greed.

MOVIEGUIDE® advises extreme caution, however, because of some strong foul language and an explicit bedroom scene in the first act. This content adds nothing to the movie’s narrative, themes and meaning. So, it’s really unnecessary to the work’s impact.