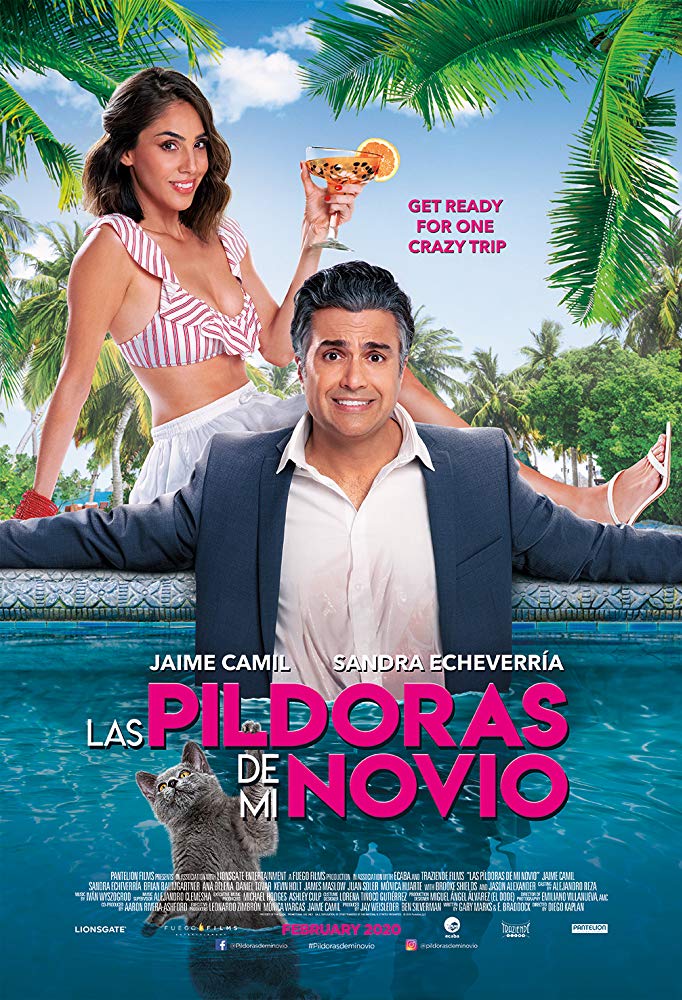 LAS PÍLDORAS DE MI NOVIO, or MY BOYFRIEND’S MEDS, is a Mexican comedy. Jess, a female marketing executive at an exclusive tequila company in San Francisco, has fallen in love with Hank, a handsome mattress store owner. Jess’s company is hosting a couples retreat for their next campaign. Even though Jess and Hank have just barely met, she invites him because she’s convinced he’s the perfect man. Meanwhile, Hank has a visit with his therapist to discuss this new relationship. The therapist has given Hank the “perfect” prescription combination for all of Hank’s needs. However, when Hank forgets to bring his meds to the retreat, the resulting chaos threatens Jess’s job.

LAS PÍLDORAS DE MI NOVIO was shot on location in Mexico. The setting is beautiful, and the actors portray their parts well. However, the movie’s relentless pagan stream of sex and drugs makes it difficult to appreciate the movie’s few nuggets of truth. MY BOYFRIEND’S MEDS also contains lots of foul language and strong lewd content. Extreme caution is advised for adults, but media-wise moviegoers will find LAS PÍLDORAS ultimately unacceptable.

(PaPaPa, OO, H, B, C, Ho, LLL, SS, N, A, D, MM):
Dominant Worldview and Other Worldview Content/Elements:
Very strong mixed pagan worldview where anything but God is a source for human well-being (sex, drinking alcohol, legal drugs, illegal drugs, consulting a witch doctor, and ultimately relying on humanist therapists), with no reference to a benevolent higher power, plus there are a few moral, redemptive themes regarding honesty and forgiveness, and two women kiss each other in a tequila ad that becomes important to the story at the end
Foul Language:
41 obscenities, two profanities, a reference to wiping a dog’s rear, and several crude references to body parts
Violence:
Man’s imagination includes moments when he imagines he is being blown up for stepping on the wrong colored tile (depicted in a violent comical way) and distraught man tries to commit suicide by falling off an upper deck, but he is saved
Sex:
Strong sexual content overall includes implied fornication on several occasions, another character winks an eye at doing “whatever you want” at a resort and implying extramarital sex, several references to condoms, two women kiss one another in a tequila ad, a cat is humping a coffee pot, man humps a lady’s legs while she’s seated on a chair, and there is a spoken reference of oral sex at a wedding
Nudity:
No sexual nudity, but man strips off his pants during karaoke and is in his underwear, and woman is in her underwear for a few scenes
Alcohol Use:
Tequila is featured many times, tequila is consumed multiple times, and the phrase “I am tequila,” is celebrated as a success, and Jess wins a promotion due to it
Smoking and/or Drug Use and Abuse:
No smoking, but man is addicted to prescription meds, man buys a “concoction” with illegal drugs from a witch doctor for a large sum of money, and a woman consumes half of the concoction and descends into a stupor; and,
Miscellaneous Immorality:
Strong miscellaneous immorality includes psychological dysfunction is celebrated, man becomes distraught and suicidal, and man lies by withholding the truth, but his relationship does suffer because of this.

LAS PÍLDORAS DE MI NOVIO (or MY BOYFRIEND’S MEDS) is an R-rated Mexican comedy about a female marketing executive who falls for a mattress store owner, but her job is threatened when her new boyfriend forgets to bring the prescription medications that keep his personal issues in check when they go to a company retreat. The actors in LAS PÍLDORAS DE MI NOVIO are good, and the setting is beautiful, but the movie’s entertainment quality and acceptability are marred by a relentless pagan stream of sex and drugs, lots of foul language and strong lewd content.

Jess, a female marketing executive at an exclusive tequila company in San Francisco, has fallen in love with Hank, a handsome mattress store owner while mattress shopping. The Tuxcueca Tequila Company is hosting a retreat for their marketing executives to develop their next campaign. The company encourages its executives to bring their “significant other” to the island retreat. Even though Jess and Hank have just barely met, she plans to invite him, because she’s convinced Hank is the perfect man.

Hank, however, has a visit with his therapist, Dr. Sternbach (Jason Alexander), to discuss this new relationship development. Hank is completely appreciative of Dr. Sternbach who has arrived at the perfect prescription combination for all of Hank’s needs. Hank harkens back to a time in his youth when he somehow knew he would need medication. At this point, two pills, Pili and Dora, an animated white and red capsule and a blue pill with a little face and arms and legs, enter the scene. Pili and Dora, together “Pildora” (pill or medication), appear many times throughout the movie as a symbol of Hank’s emotions and reliance on these “friends” for support. Meanwhile, Dr. Sternbach urges Hank to tell this new girl the truth about his reliance on medication for his various issues.

Hank invites Jess to dinner at his place. Jess plans to invite him to the island retreat while Hank plans to reveal his prescription drug dependence. Jess invites him to the retreat during a sumptuous meal that Hank has prepared. She informs him they would have to leave tomorrow for the weekend. Hank, excited but thrown by the sudden invite, excuses himself and rushes to his bathroom. He opens the medicine cabinet to reveal a vast array of neatly organized prescription bottles. He quickly takes several pills to calm down and floats back to the dining room with animated butterflies flying around him. He accepts her invite but doesn’t tell her about his reliance on medications.

The next morning, Hank starts the mad dash to pack all his medications. He finds a large bottle and starts to erratically pour pills from all the bottles into the one big bottle, grabs his things, and dashes to the airport.

Once the couple gets settled into their room, Jess wants to take Hank’s clothes off and make love, but Hank excuses himself to the bathroom. Presumably, Hank wants to take some type of medication to calm down and get in the mood, but as he unpacks his bag, he realizes that his big bottle of pills is missing. He panics as he realizes that the cat might have knocked the big bottle off his bag and it rolled under the bed. Hank’s imaginations are portrayed as real events which then cut back to Hank shuddering with his eyes closed. As Hank continues to panic, the hair at his temples turns gray. He walks back into the room with Jess and announces they will have to wait because he forgot condoms.

Hank bolts out of the room and finally reaches Dr. Sternbach by phone to tell him of his conundrum. He is on a remote island and has forgotten his meds. Dr. Sternbach assures him that he will do everything he can to make sure Hank will get his meds, including shipping Hank a package by FedEx. Dr. Sternbach tells Hank how the symptoms will start to reappear and urges him to sleep a lot. Hank, still desperate for immediate answers, goes to the gift shop. A young male clerk at the gift shop informs Hank that there is no access to medical care, but he can get him in touch with a witch doctor in the kitchen. Hank is eventually willing to pay the “witch doctor” money for a concoction made up of illegal drugs.

Hank spirals out of control with all his symptoms coming to the fore (hallucinations, which are depicted as “real,” obsessive compulsive disorder, compulsive swearing, and more). The incidents start infrequently but escalate to non-stop issues. Eventually, Hank completely loses control during a costume karaoke event, singing Backstreet Boys while gesticulating with his crotch on the stage. He rips off his pants like a stripper and sings and dances in his underwear and open shirt with his boots. He jumps off the stage and starts to “dry hump” another lady’s legs. Jess is mortified. (Really? And NOW the morality sets in?) It reaches a point where Jess is afraid she will not only lose her long-awaited promotion, but she might actually lose her job. Hank despairs that he will lose Jess and may ultimately lose his life.

Will Hank own up to his problems and mistakes and ask Jess to forgive him?

LAS PÍLDORAS DE MI NOVIO was shot on-location in Mexico. The setting is beautiful, and the actors portray their parts well. However, the relentless pagan stream of sex and drugs makes it difficult to appreciate the few nuggets of moral truth this movie offers at the end. MY BOYFRIEND’S MEDS also contains lots of foul language and strong lewd content. Extreme caution is advised for adults, but media-wise moviegoers will find LAS PÍLDORAS ultimately unacceptable.