MAN IN THE ARENA 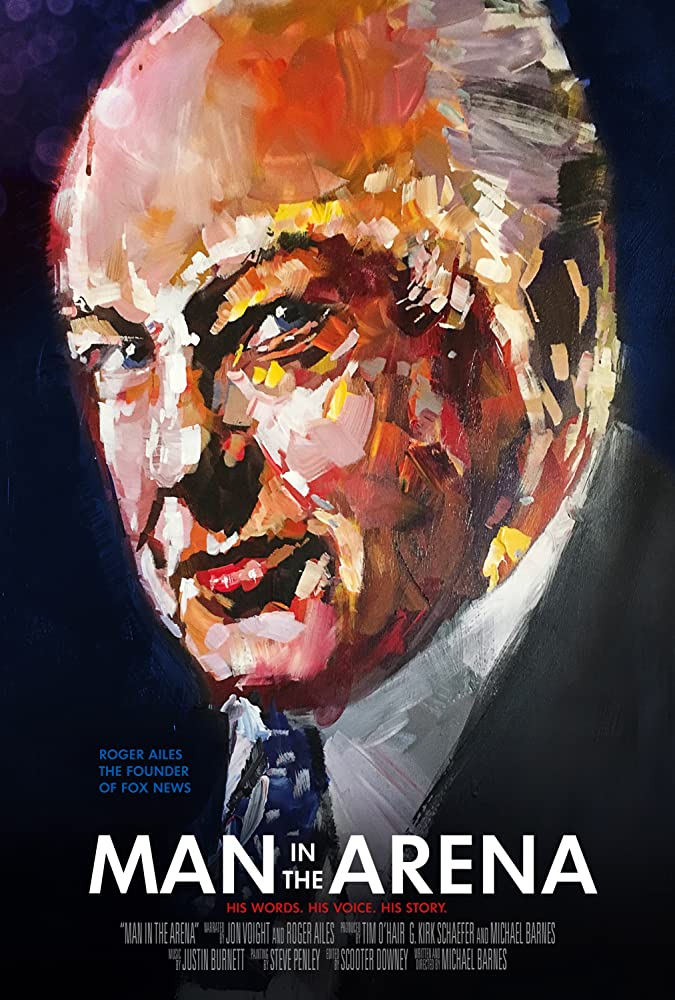 MAN IN THE ARENA is a documentary about the life of Roger Ailes, the famous TV producer who became a Republican media consultant for three presidents and created the Fox News Channel. The filmmakers use autobiographical recordings made by Ailes over a 30-year period. These recordings are accompanied by archival footage and old and new interviews with famous politicians and journalists such as Rudy Giuliani, Newt Gingrich, and Bill O’Reilly. The movie gives an account of Ailes’ life, starting with his humble beginnings in Ohio.

What the movie does best is to document the impact Roger Ailes had on American politics and journalism in the last 50 years. His political campaigns became the standard for subsequent campaigns. The same goes for the Fox News Channel, which, under his leadership, became the most popular channel in Cable TV News. That said, the movie’s approach to politics and culture is a secular one. Though the movie is clearly pro-capitalistic, it doesn’t offer viewers a Christian, biblical foundation beyond that. There’s also some strong foul language. So, MOVIEGUIDE® advises extreme caution for MAN IN THE ARENA.

(H, BB, CapCap, LL, V, S, M):
Dominant Worldview and Other Worldview Content/Elements:
Light humanist worldview with some moral, pro-capitalist elements promotes conservative political philosophies but from a secular standpoint
Foul Language:
19 obscenities (several “f” words), two GD profanities, one Jesus profanity, and two light MG profanities
Violence:
Brief newsreel footage of riots and the Vietnam War
Sex:
No depicted sex, but light references to allegations of sexual harassment such as one woman claims man tried to kiss her
Nudity:
No nudity
Alcohol Use:
No alcohol use
Smoking and/or Drug Use and Abuse:
No smoking or drugs; and,
Miscellaneous Immorality:
Some leftist name-calling against a conservative media leader.

MAN IN THE ARENA is a documentary about the life of Roger Ailes, the famous TV producer and executive who went on to become a Republican political consultant for three presidents and create the Fox News Channel, which became the most popular news channel on Cable TV. Using audio recordings by Ailes made over a 30-year period, MAN IN THE ARENA is told from his point of view, but still offers a fascinating insight into a man who had a huge impact on how political campaigns and TV news are made. However, MAN IN THE ARENA contains some strong foul language, including several “f” words and a few profanities, and the movie’s political ideology is too secular, so MOVIEGUIDE® advises extreme caution.

The movie opens with a recording of Roger Ailes talking with his wife and their son. It then shifts to reports of his death. Aisles is called a “genius” because of his success and his ability to use the television medium in new ways, but Democrats and pundits on the left label him an “evil genius.”

Using autobiographical recordings by Ailes himself, the movie then proceeds to give an account of his life, starting with his humble beginnings in Warren, Ohio. A hemophiliac, Ailes was unable to be a school athlete or join the Armed Forces, so he graduated from Ohio University in 1962, where he majored in radio and television. He became a production assistant for a local daytime TV talk-variety show in Cleveland hosted by Big Band singer Mike Douglas, who also sang the Prince Charming role in Disney’s 1951 animated classic, CINDERELLA. THE MIKE DOUGLAS SHOW was a hit with TV viewers and became nationally syndicated in 1965. Eventually, it had an even bigger audience than Johnny Carson’s TONIGHT show. Working for Douglas, Ailes became known as a problem solver, and he soon became Executive Producer of the program, earning two Emmy Awards in 1967 and 1968.

Mike Douglas not only interviewed major celebrities and actors on his program, he also interviewed many political figures, including Martin Luther King. Vice President Richard Nixon became impressed with Ailes’ ability to use the television medium, which Nixon thought was just a gimmick. However, Nixon hired Ailes to be his television advisor, and Ailes pretty much invented the concept of the “townhall” event, where “average” Americans could ask questions of political candidates. Using Ailes’ techniques, Nixon and his aides were able to present Nixon as more likeable, and he won the presidency in 1968.

After that, Ailes started his own media consulting company. In 1984 and 1988, he worked on both the Ronald Reagan and George H. W. Bush campaigns, helping them get elected. He returned to TV work, however, and in 1993 became president of CNBC and started the “America’s Talking” channel, which eventually became MSNBC, a Cable News outlet. At one point, he even had his own interview program, and the movie includes some snippets of those interviews. In 1996, Rupert Murdoch, owner of the Fox TV Network and 20th Century Fox Pictures, hired Ailes to start the Fox News Channel (FNC). Under his tutelage, FNC became the most popular network in Cable TV News.

Ailes’ reign at Fox came to an end when allegations of sexual harassment by several female anchors and reporters against Ailes surfaced. Although Ailes denied the allegations, he was forced to resign in 2016 and wasn’t allowed to defend himself publicly beyond his simple denial. However, the ending allows his wife, Elizabeth, to discuss one of the allegation. The end of the movie also includes an emotional account from Elizabeth of her final words to her husband, who hit his head during a fall in his bathroom and could not speak.

The movie’s perspective toward its subject is based on two quotes. The first is a famous quote by President Teddy Roosevelt in a famous speech he gave in Europe in 1909, “It is not the critic who counts. . . . The credit belongs to the man who is actually in the arena. . . . his place shall never be with those cold and timid souls who neither know victory nor defeat.” The second is a quote from Ailes, “What they’ve called me is opinion. What I’ve done is on the record.”

So, what the movie does best is to document the amazing impact that Roger Ailes had on American politics and journalism for the last 50 years. His political campaigns became the standard by which all subsequent campaigns are measured. The same goes for what he did with the Fox News Channel.

One of the most important parts of the documentary occurs toward the end where the movie discusses the arrogance of the leftists running the mainstream media. “They don’t think anyone else has a legitimate point of view,” it is said. From the very first, however, Ailes envisioned Fox News as a place where the “valid beliefs” of other people could be heard. It’s perhaps no wonder, then, that the Fox News Channel remains the Number One news network on Cable TV, four years after Ailes’ departure.

A disclaimer tells the viewer that, because of legal issues, the movie was unable to discuss the details about the sexual harassment lawsuits against Ailes. However, it does discuss allegations from former Fox anchor Megyn Kelly, who did not sue Ailes. Kelly claimed that Ailes tried to kiss her during one private meeting in his office. Ailes denied her claim, and his wife, Elizabeth, claims in the movie that Kelly’s attitude toward Ailes changed when he complained to her that she was trying to negotiate her salary in the press. Apparently, Ailes reminded Kelly that he’s not the only person who has the power to fire her, hinting that Rupert Murdoch and his family didn’t like it that she appeared to discuss her salary negotiations with Fox in the press. During this discussion, iconoclastic feminist critic Camille Paglia criticizes the accusers for dredging up 10-year-old conversations with Roger Ailes to ruin his career. Also, former Fox News host Bill O’Reilly correctly notes that, after the stupendous of success that Ailes achieved with Fox, he became a target in 2005 of far left ideologues like George Soros and David Brooks, the creator of the slander website Media Matters.

Setting aside partisan politics, however, MAN IN THE ARENA provides an important document in the culture wars that have captured the imagination of many Americans since the 1960s. It gives one of the major figures in those cultural, political wars a chance to tell his side of the story.

That said, the movie’s approach to politics and culture is a secular one. Though the movie is clearly pro-capitalist, it doesn’t offer viewers a Christian, biblical foundation beyond that. This is shown by the recordings by Ailes, who only seems to mention God in a profane way a couple times and uses several “f” words during the replay of his words. As America’s Declaration of Independence states, our civil liberties come from God, not government. Also, it is the Christian’s duty to make enough obedient disciples of Jesus that they can establish, through the power of the Holy Spirit, the dominion of Jesus Christ over every area of life, including politics, the family, business, religious institutions, art, etc.

Watch MAN IN THE ARENA: