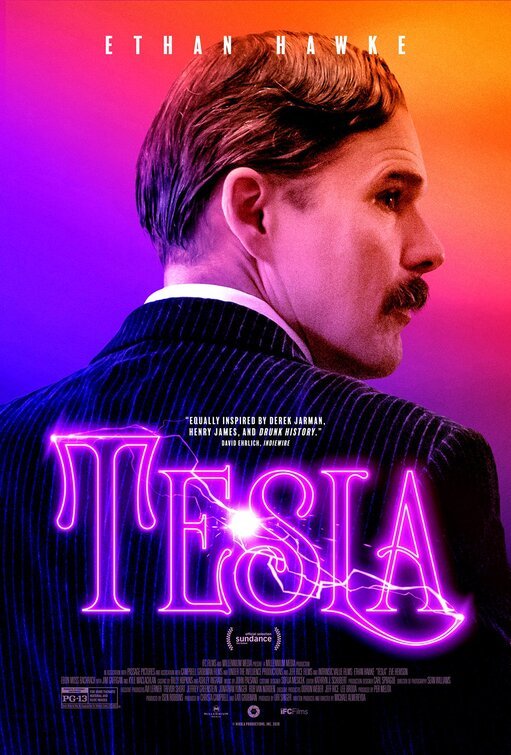 TESLA is a surrealistic, European style movie about the famed inventor Nikola Tesla, a contemporary of Thomas Edison. The movie starts with Tesla experiencing electricity while petting a black cat. Next, he’s roller skating with a beautiful woman. Cut to nine years earlier in 1884 with Thomas Edison making a breakthrough developing the lightbulb when Tesla joined Edison’s team. After leaving Edison, Tesla forms a deal with George Westinghouse to develop Tesla’s alternating current. Westinghouse and Tesla get the contract for the Chicago World’s Fair. Then, Tesla moves to Colorado to test his theory that the Earth and the sky can become a giant electrical circuit.

TESLA is a tragic tale of genius. The acting is superb. The only problem is that Tesla’s character is too brooding and monochromatic. He always looks like he’s a little too distant and has little character development. The movie takes several jabs at capitalism, but it also extols capitalism. It hints at paranormal activity but never develops that. Caution is advised for children because of a few profanities, worldview problems, some sensuality, and morbid discussions of death.

(Pa, FR, Cao, Acap, O, HH, L, V, S, N, A, D, M):
Dominant Worldview and Other Worldview Content/Elements:
Light pagan worldview with some spiritualist elements, some capitalist and some anti-capitalist elements, and some ill-defined, possible occult elements, plus lots of humanist content
Foul Language:
No foul language until an outburst in one scene of two GDs and an obscenity
Violence:
Discussion of a best friend drowning when Thomas Edison was 5-years-old and Tesla’s brother drowning when he was 12-years-old, strange ice cream fantasy fight between Tesla and Edison
Sex:
No sex, but Sarah Bernhardt character is sexually provocative
Nudity:
Sarah Bernhardt is portrayed in a very see-through dress onstage, and a nude classical painting
Alcohol Use:
Minor alcohol use
Smoking and/or Drug Use and Abuse:
Smoking and no drugs; and,
Miscellaneous Immorality:
Strange statement from Tesla that he’s getting signals from Mars, and Westinghouse cheats Tesla.

TESLA is a surrealistic European style movie with a fairly linear biographical plot about the famed inventor Nikola Tesla, a contemporary of Thomas Edison. TESLA is very entertaining, but punctuated by a strange scene of Tesla singing a modern song at the end and another strange scene with some profanities.

The movie starts with Tesla experiencing electricity while petting a black cat. Next, he’s roller skating in an inner courtyard with a beautiful woman. Nine years earlier, we flash back to Thomas Edison on August 11, 1884, making a breakthrough in his development of the lightbulb. Tesla has recently joined the Edison team having come from a small town in Hungary to the USA seeking a partner to develop his inventions. Edison talks constantly and mentions one story where his best friend and he go swimming at 5-years-old, and his best friend, George, drowns. That night Tesla talks to an apparition of his brother, who drowned at the age of 12.

When Tesla asks about Edison’s morose behavior, he’s told that Edison’s wife died five days before at the age of 25. They were married at 16.

Meanwhile, Anne, the daughter of wealthy banker J. P. Morgan, falls in love with Tesla, but Tesla doesn’t reciprocate. He’s too caught up in his mind. She tells us Tesla was born in the tiny town of Smiljan in the Austro-Hungarian Empire in 1856, and his father was an Orthodox priest. His mother was very close to him.

After leaving Edison, which is dramatized in an ice cream cone fight where Edson and Tesla are mushing ice cream into each other, Tesla becomes impoverished and ends up digging ditches. Eventually, he meets George Westinghouse, who forms a deal with Tesla to develop Tesla’s alternating current.

Edison had been convinced AC was dangerous and developed direct current. Although Edison has many communities using direct current, Westinghouse and Tesla quickly surpass him with the more powerful and less expensive alternating current. Edison suggests that alternating current could kill a man on death row, so he suggests that someone should try it in an execution. New York State decides to use electrocution on a man who wants to be executed after ax-murdering his wife. The electrocution is botched and disgusts everyone who witnesses it.

Westinghouse and Tesla get the contract for the Chicago World’s Fair. Westinghouse has a private meeting with Tesla, explaining he can’t pay the royalties to Tesla in their contract. Tesla has no business or economic sense, so he voluntarily tears up his contract, leaving Westinghouse to get rich off Tesla’s patents.

In the midst of this, Sarah Bernhardt, the famous stage actress, meets Edison and Tesla, and is taken with Tesla.

Throughout the movie, J. P. Morgan’s daughter, Anne, shows up suggesting that Tesla needs her.

Tesla moves to Colorado to test his theory that the Earth and the sky can become a giant electrical circuit without cost to communicate to the other side of the planet. Anne explains that no one is interested because no one can control it and make money off it.

Sarah Bernhardt comes to Colorado to perform, and Tesla’s experiments blow out the electricity in the town. The mayor curses him. Sarah Bernhardt goes to Tesla to get him to come see her performance. In her performance, her costume is more see-through than costume, but Tesla’s too wrapped up in his mind to even care.

Anne Morgan visits Tesla again and has convinced her father to put money into Tesla. However, her father stops when Tesla starts saying he’s getting signals from Mars, and Marconi develops the transcontinental telegraph and sends a signal across the Atlantic, making Tesla’s experiments redundant. Anne explains that if Tesla’s system succeeds, no one controls the power. Tesla counters that he can photograph thoughts. Of course, his ideas sound like the modern day internet and brain scans and aren’t as far-fetched as they were in the 1800s.

At this point, in a very weird scene, Tesla appears singing the Tears for Fears song, “Everybody Wants to Rule the World” into a modern microphone.

TESLA is a tragic tale of genius. The acting is superb. The only problem is that the character of Tesla is too brooding and monochromatic. He always looks like he’s a little too distant and has very little character development. The movie takes several jabs at capitalism, but it also extols capitalism. It suggests Edison and Westinghouse were good at invention and business whereas Tesla was just a brilliant mind who wanted to do good for others. Tesla the man is a cult figure in many New Age circles. This movie doesn’t develop that theme. The movie hints at ghosts but really doesn’t call them such. It hints at paranormal activity but never develops that. It hints at sexual promiscuity but never develops that. It is, in fact, an old-fashioned, surrealist European style movie with lots of suggestions without clear development.

The scene of Tesla singing at the end is really, really weird, like the only way they could get Ethan Hawke to play in the movie was to allow him to sing the song.

Since it’s so ambivalent, reviewers and viewers can read into it what they want. Caution is advised for children because of the sultry mood, some sensuality, a few profanities, some of the worldview problems, and some morbid discussions of death.