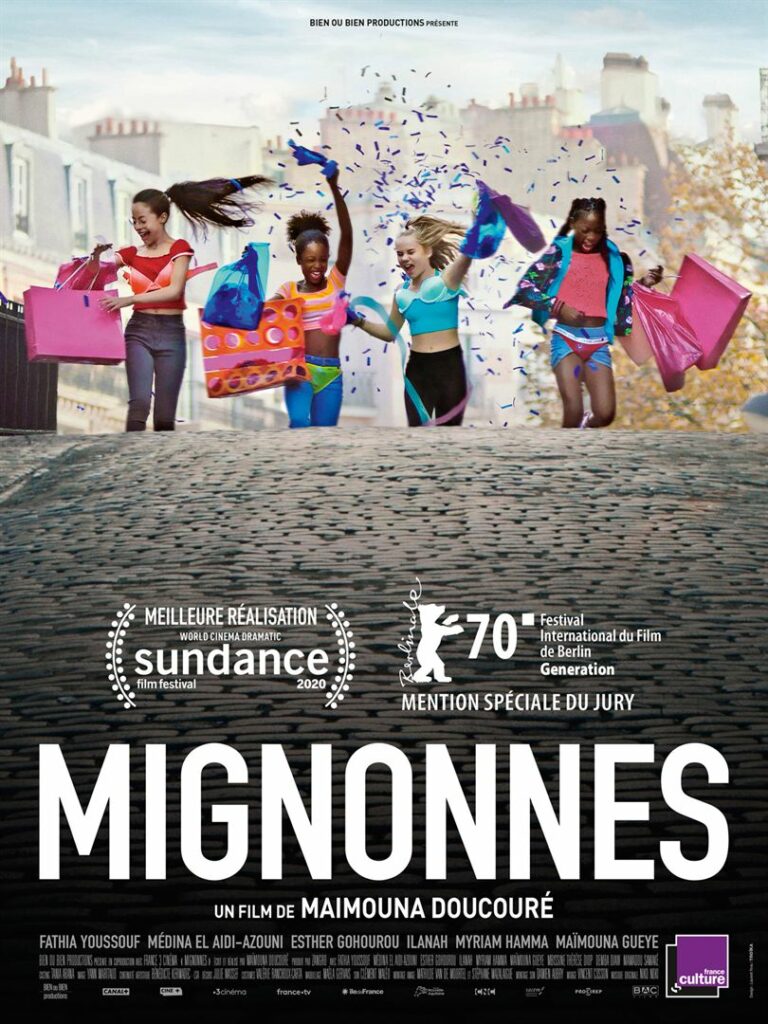 CUTIES is a French movie streaming on Netflix about an 11-year-old girl named Amy who longs to fit with the salacious but popular dance crew called “Cuties.” After swaying the Cuties that she’s worthy of being part of their clique, Amy starts to act out and dress provocatively. She also disrespects her elders and posts lewd content of herself on the Internet. Will Amy’s actions have consequences for her family and her new friends?

CUTIES is a repulsive, tasteless, mediocre movie that turns underage girls into sex objects. It has a strong, very immoral pagan worldview where tween girls do whatever pleases them, including sneaking into places, not telling their parents where they are or what they’re doing, and similar acts of rebellion. The movie also depicts Islam where characters praise the name of Allah (a false god), pray to Allah, consult an Iman, and extoll polygamy, but the movie doesn’t necessarily applaud these elements because the protagonist seems haunted by this lifestyle. There are some subtle moral elements about motherhood. Overall, however, CUTIES is an abhorrent, salacious, loathsome piece of filmmaking.

(PaPaPa, FRFRFR, B, LLL, VV, SS, NN, MM):
Dominant Worldview and Other Worldview Content/Elements:
Dominant pagan worldview where tweens do whatever pleases them including sneaking into places, not telling their parents where they are or what they’re doing and things of the like, Islam depicted, characters praise the name of Allah and consult an Iman to see if there’s a demonic spirit in a tween girl who’s disobeying her mother, characters pray to Allah and polygamy extolled, but the movie doesn’t necessarily applaud all of these elements because the protagonist seems haunted by this lifestyle, with some subtle morality as a mother cares for the wellbeing of her children
Foul Language:
At least 39 obscenities (including some “f” words), one profanity when a character swears to God, a few racial slurs in a song but they’re hard to hear, mention of males urinating in a woman’s mouth, and one obscene gesture
Violence:
Mention of rape in a casual sense where tween girls don’t seem to fully grasp how terrible rape is, blood depicted when a tween starts her menstrual cycle for the first time, two tween girls get into a cat fight and hurt each other, but there’s no blood, tween character pushes a classmate of hers into a river, who almost drowns as the pusher stands by and just watches
Sex:
Strong sexual content involving underage girls includes intense sexual dancing by tween girls who twerk, stroke their private parts, spread their legs, booty shake on one another and similar things, tween characters talk about men’s private parts, tween girl touches a used condom, but she doesn’t know what it is until her friends tell her, when a tween girl is in a crop top a man notices and looks her up and down, tweens try to teach one another how to dance in a sexual way and study online videos to mimic similar movements, tween girls run around town in lingerie, and a girl’s younger brother picks it up in the street, and a tween takes off her shirt and unzips her pants in attempt to lure a man, but he doesn’t reciprocate
Nudity:
A woman’s breast is shown in a dance video, tween watches a video of adult women in their bras and underwear dance in a club and parts of their rears are visible, implied nudity when a tween tries to snap a photo of a teenage boy while he goes to the bathroom, but viewers don’t see anything, a mother is depicted in a bra, upper male nudity in couple of scenes, midriffs shown by tween and teenage girls, young boy appears in his underwear while taking a bath, tween girl appears in a training bra and underwear in one scene, implied nudity of a tween’s private part as she takes a photo and puts it on the Internet but viewers don’t see anything
Alcohol Use:
No alcohol
Smoking and/or Drug Use and Abuse:
No smoking or drugs; and,
Miscellaneous Immorality:
Theft, lying, tween character literally runs away from her responsibilities, bullying, and name calling.

CUTIES is a French movie streaming on Netflix about an 11-year-old girl named Amy who longs to fit in with the popular dance crew called “Cuties.” CUTIES has a dominant Pagan worldview where tweens do whatever pleases them. Regrettably, CUTIES has extreme sexual content and foul language at the hands of these tweens. For these reasons and depictions of a false religion, MOVIEGUIDE® finds the movie excessive.

Originally titled, MIGNONNESM, CUTIES begins with a tween girl who looks into the camera while dolled up for a dance competition. However, she’s crying, and something is obviously not right.

Cut to that same girl, who viewers learn is named Amy. Amy’s mother appears to be a single mother who, in addition to Amy, has two younger sons. Soon after Amy’s mother takes them to an Islamic prayer meeting, and while the ladies discuss things like modesty and obeying one’s husband, it’s clear that Amy is uncomfortable and not as pious as those around her.

The cool girls at Amy’s school call themselves the “Cuties” and double as a dance group committed to making their mark in a local dance competition. Amy longs to be like them and mimics their outfits, crops tops and short dresses accordingly. Amy also knows that she won’t fit in if she doesn’t have a cell phone, so she steals one from a guy who works in her apartment building. Meanwhile, Amy’s mother learns that her husband who’s been away has taken a second wife. She tries her best to camouflage this information from her children, but Amy overhears her tell a friend about her marriage struggles over the phone.

Eventually, the Cuties let Amy into their clique since she’s obviously adamant that she can help them in some way, whether it’s filming their dance routines or participating herself. However, one of the Cuties named Yazmin gets pre-selected for the dance competition on her own which takes her out of the group. To the surprise of the rest of the Cuties, Amy takes her place. Amy misses the Cuties’ opportunity to advance to the next level of the competition, because she doesn’t make it in time since her aunt made her accomplish a few responsibilities.

Amy is able to sway the Cuties that she’s still worthy to be a part of their clique but the values her mother raises her with continue to go by the wayside. Amy posts photos of herself in her underwear and then eventually, her private area. A boy taunts her at school because of this and slaps her on the rear which brings her poor behavior to her mother’s attention. Needless to say, her mother is beside herself.

What will become of Amy and her friends now?

CUTIES functions like an arthouse movie where there are lots of handheld shots but well-crafted editing that helps the story flow. That said, most mainstream audiences might not enjoy these characteristics, which are very customary for European-made pieces. The lead actress who plays Amy does a convincing job, but the movie’s awful subject matter, foul language and lewd content make for a repulsive, tasteless, mediocre movie.

CUTIES has a very strong pagan worldview where the tween characters do whatever pleases them, including sneaking into places, not telling their parents where they are or what they’re doing, and similar acts of rebellion. The movie also depicts Islam where characters praise the name of Allah, consult an Iman to see if there’s a demonic spirit in a tween girl who’s disobeying her mother, characters pray to Allah, and polygamy is extolled, but the movie doesn’t necessarily applaud all of these elements because the protagonist seems haunted by this lifestyle. There is some subtle moral elements where a mother cares for the wellbeing of her children. Overall, however, CUTIES is an abhorrent, salacious, loathsome piece of filmmaking.

Audience: Adults (if you can even say that)