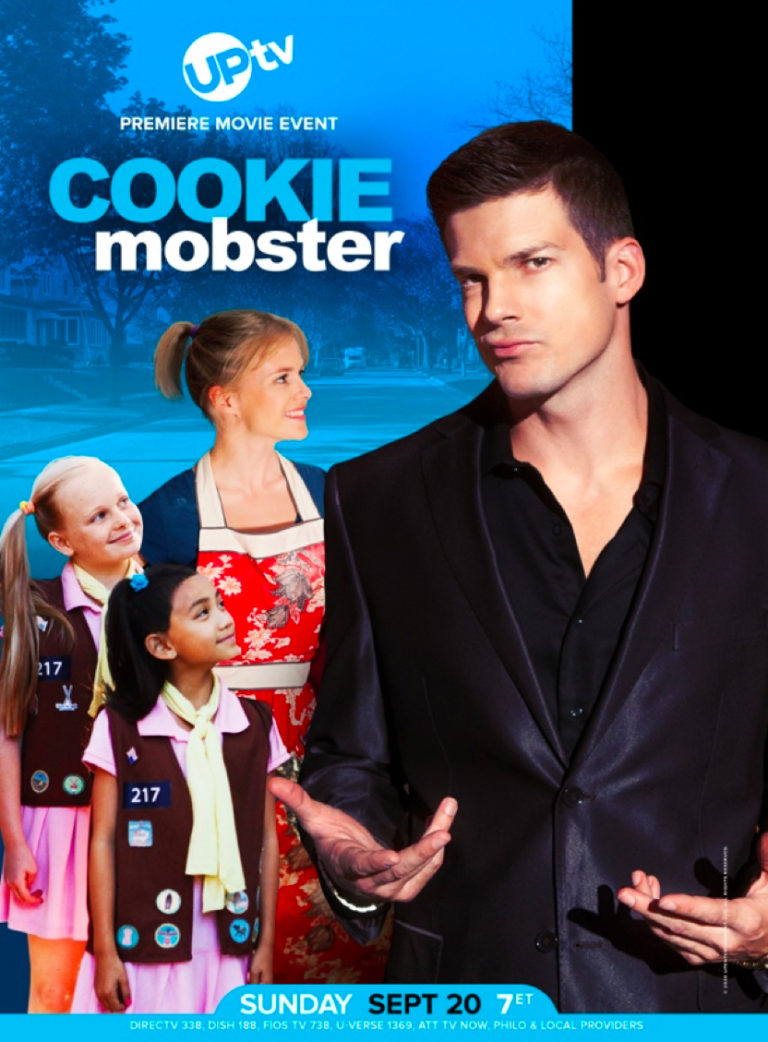 THE COOKIE MOBSTER follows Joey, an ex-mobster who’s placed in witness protection in a small California town. Joey is supposed to lay low until he can testify at a trial for two of his former crooked cohorts. Joey meets his neighbors, Amanda, and her daughter, Sally, who are engaged in a girl scout cookie competition with Sally’s girl scout troop. Joey saves the troop’s money box from being stolen. So, the girls recruit him and his mother’s cookie recipes to help them win the competition. However, Sally captured Joey stopping the thief on video, and the video goes viral on the Internet.

Airing on UPtv, THE COOKIE MOBSTER is lackluster and predictable, but has a strong moral worldview with many positive themes and life lessons. It teaches children that winning isn’t the most important part of life, but that what you accomplish and how you accomplish it matters more. It also promotes love and marriage. For the most part, THE COOKIE MOBSTER is family friendly, but caution is advised for younger children for a car crash, people using guns, stealing, and lying.

(BB, C, V, M):
Dominant Worldview and Other Worldview Content/Elements:
Strong moral worldview with some Christian, redemptive elements where adults teach children that winning isn’t everything, and that sometimes what you accomplish and how you accomplish it are more important, good mothers are seen, a positive male role model is featured, love is extolled, there’s a positive priest character, two adults fall in love and get married
Foul Language:
No foul language
Violence:
Guns shot, and a fake dead body is seen but the person is still alive, a food fight between children occurs, a car is crashed on purpose (it’s not super violent, however), and a comment about a house being trashed
Sex:
No sex scenes, sexual immorality or lewd content
Nudity:
No nudity
Alcohol Use:
No alcohol use
Smoking and/or Drug Use and Abuse:
No smoking or drugs; and,
Miscellaneous Immorality:
Stealing, lying, bad role model in one mother character.

THE COOKIE MOBSTER follows a mobster from New York who’s placed in witness protection, where he helps a girl’s scouting troop bake cookies. THE COOKIE MOBSTER is lackluster, but it contains a strong moral worldview teaching children that winning isn’t everything and upholding love and marriage.

THE COOKIE MOBSTER opens with the leader of the mob, Joey, and his two partners, Fish and Cheeks, at a warehouse in New York City in the middle of a deal. Just as the deal is almost done, the FBI shows up and busts the mob. When Fish and Cheeks are split up from Joey in an attempt to flee, they hear Joey say he would rather die than be captured, followed by gun shots.

Fish and Cheeks are arrested and see what they think is Joey’s body being rolled out to an ambulance. When the ambulance doors shut, Joey pops up and the audience learns that he faked his death in an attempt to work with the FBI.

Cut to Sunnydale, California. Girl Scout Troop 217 is baking cookies for a fundraiser. The troop is led by Amanda. Her daughter, Sally, along with Lucy, Ping and Nita, make up the troop members. When they arrive in the town square to sell their cookies, they find that Troop 119 stole the prime spot for selling. The two troops are competing in a bake sale contest, and whoever wins will be the face of Sunnygirl Girl Scouts.

Sally goes over to confront the other group about what they did, and a junk food fight ends up breaking out between the two troops. Both Amanda and the other troop leader get a firm lecture by the director of the Sunnygirls.

Later that day, Joey is escorted by an FBI agent to a witness protection home in Sunnydale so he will be safe as he awaits trial to testify against other members of the mob. When Amanda and Sally arrive home, Sally’s upset about the day’s events. She decides to quit being a Sunnygirl. As she walks away from home, she sees Joey and introduces herself.

The next day, Troop 217 are out selling cookies again. When Joey comes into town, he buys a cookie before heading to the grocery store to make his mom’s famous Italian cookies. Sadly, as the girls look away from their stand, their money box is stolen. However, the thief runs into Joey, who stops him. Sally captures the whole thing on video. Joey quickly runs off and forgets his groceries because he’s supposed to be lying low.

Amanda and Sally return his groceries later that day, and Sally says that Amanda should show Joey around town. The two go to dinner together and hit it off. However, just when Joey and Amanda are done eating, someone recognizes Joey. Sally had uploaded the video of Joey on the Internet, and it went viral.

Will Joey be able to stay hidden until the trial, or will Fish and Cheeks find him?

THE COOKIE MOBSTER is a lackluster comedy. It’s pretty predictable, and the script jumps around a lot while following a bunch of different people. Also, the acting is average with the best performance coming from the young Mackenzie Foy.

However, THE COOKIE MOBSTER has a strong moral worldview with many positive themes and life lessons that families might enjoy. The movie teaches children that winning isn’t the most important part of life, and that oftentimes, what you accomplish and how you accomplish it matters more. For the most part, THE COOKIE MOBSTER is family friendly, but caution is advised for younger children for a car crash, people using guns, stealing, and lying.