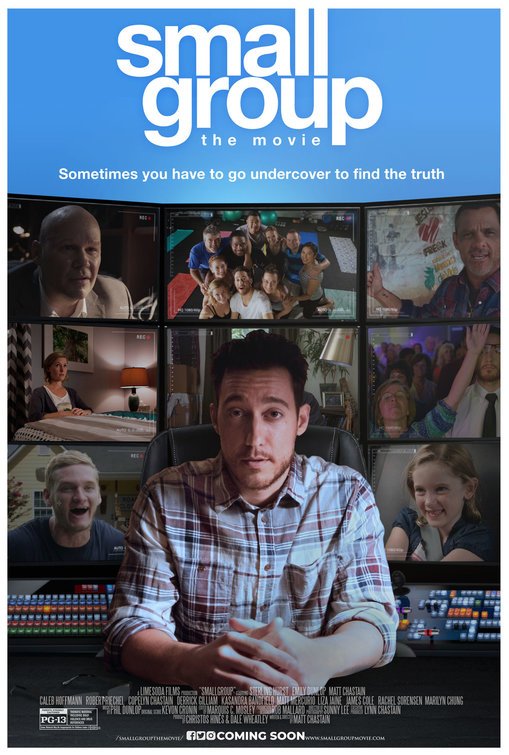 SMALL GROUP is a faith-based comedy on DVD, Blu-ray and streaming. It follows Scott Cooper and his pregnant wife, Mary, as he goes undercover as a fake Christian to make a documentary about the dwindling influence of Christianity in America. Scott and Mary are skeptical about what they’re doing but end up developing a real relationship with Jesus Christ. However, that relationship is tested through several traumatic events and a betrayal by the man producing Scott’s movie.

SMALL GROUP has hilarious and dramatic moments. However, it starts to veer off and tackle too many different issues, which sometimes gets a bit confusing. The movie is also unnecessarily long. Despite this, the movie has a strong, inspiring Christian worldview as a former churchgoer reconnects with the faith of his youth after years of skepticism. The character gets baptized, prayer is extolled, and Scripture is read many times. Moral elements like family and community are also valued. However, SMALL GROUP is rated PG-13 for some scary violence, tragedy, brief foul language, and some references to sins like prostitution. So, MOVIEGUIDE® advises caution for older children.

(CCC, BB, Ab, Ho, L, VV, S, AA, DD, M):
Dominant Worldview and Other Worldview Content/Elements:
Very strong Christian, biblical worldview where character gets baptized, and prayer and church community are extolled, several church services and small group meetings are shown where Scripture is read and hymns are sung, life, forgiveness, honesty, and helping others are valued, with some Anti-Christian comments where a character says religion is a lie and wants to show that Christianity is full of judgmental people (his beliefs are eventually rebuked, however), plus a homosexual element where a man cross-dresses but eventually talks about how the only way to know Jesus is to stop cross-dressing
Foul Language:
Three “h” obscenities, five light profanities, two uses of the word Cooter as a joke, character references pet bunny using the word “pee”
Violence:
Brief strong and light violence includes a gun is seen in one scene and used in another in an attempt to kill someone, but the man’s just trying to scare other people, a fist fight occurs between two men where one man chokes another to get him to pass out, man jokes about killing some people when buying camping gear, a knife is shown, conversation about someone choking on a peppermint and dying, conversation about a pet bunny dying (but the bunny is found at the end), woman passes out and goes into pre-term labor, and a tragic death occurs
Sex:
Man tries to have sexual relations with a young girl, but it is unclear if she is being trafficked, or if she’s a prostitute, married couple kisses, and man starts to take his shirt off
Nudity:
Girl shows midriff
Alcohol Use:
Couple drinks wine at home, and wife jokes her husband is drunk, man drinks beer, and a man takes a shot of liquor because he’s stressed
Smoking and/or Drug Use and Abuse:
No smoking, but there’s a joke about getting high; and,
Miscellaneous Immorality:
Deception, man says his wife can abort their baby, but the wife doesn’t agree and tells him to take back what he said, and one character has bad morals and judgment.

SMALL GROUP is a faith-based movie available on DVD, Blu-ray and streaming about a man and his pregnant wife who go undercover as fake Christians to make a documentary about the dwindling influence of Christianity in America, but find more than they bargained for when they attend a small group at a local church. SMALL GROUP has some hilarious and dramatic moments, with an inspiring Christian worldview showing the power of faith, but the movie is too long and contains some scary violence, tragedy, brief foul language, and references to sins like prostitution, which warrant caution for older children.

The story follows R. Scott Cooper and his family as they move from Los Angeles to a small town in Georgia. Scott is a documentary filmmaker whose first movie was a flop. However, a production company in Georgia gives him a second chance. They want Scott to make a movie about the dwindling influence of Christianity in America.

Scott goes to meet the producer, Ballard, and learns that Ballard wants him to go into this church as an undercover Christian to make the movie. At first, Scott says he won’t do it because he believes it’s unethical. However, Scott’s financial situation is bad. So, when Ballard writes him a a check for $10,000.00, Scott and his wife, Mary, decide he should make the movie.

Armed with spy glasses and a cross necklace equipped with a camera, Scott and Mary join a church in their new town and are quickly asked to join a small group. Scott and Mary begin going to small group meetings at one member’s home. Slowly, they start to enjoy the meetings and make friends with the people in their group. However, Scott uses his last name, Cooper, as his undercover name with all the new people he meets.

During this time, Mary learns she’s pregnant with their second child. Mary had some trouble with her first pregnancy and is nervous about what this next one will bring. Scott tells her she has options, but she quickly shoots him down and wants to go through with the pregnancy. Amid the scariness of the future, Scott and Mary also deal with a crazy right-wing neighbor.

The small group Scott and Mary are a part of decide that the men in the group are going to go on a mission’s trip to Guatemala. Scott goes on the trip while Mary stays home. The trip to Guatemala rocks Scott’s world. However, just as Scott begins to change his mind about Christianity, tragedy strike,s and the producer tries to turn Scott’s footage into a movie attacking Christians.

SMALL GROUP starts out on a high note. It’s hard to find a faith-based movie that can genuinely make an audience laugh, and this one does just that. It has hilarious moments at the beginning while talking about Christian stereotypes, but starts to veer off and tackle too many different heavy issues, which gets a bit confusing. The movie is also unnecessarily long. It could have been stronger had the time been cut down and the script been structured more tightly.

Despite this, SMALL GROUP has a very strong, inspiring Christian worldview as a former churchgoer reconnects with the faith of his youth after years of skepticism. The character gets baptized, and prayer is extolled, while Scripture is read many times. Moral elements like family and community are also valued. However, SMALL GROUP is rated PG-13 for some scary violence, tragedy, brief foul language, and some references to sins like prostitution. So, MOVIEGUIDE® advises caution for older children.