"Vigorous Defense of Capitalism and Liberty Against Socialist Tyranny" 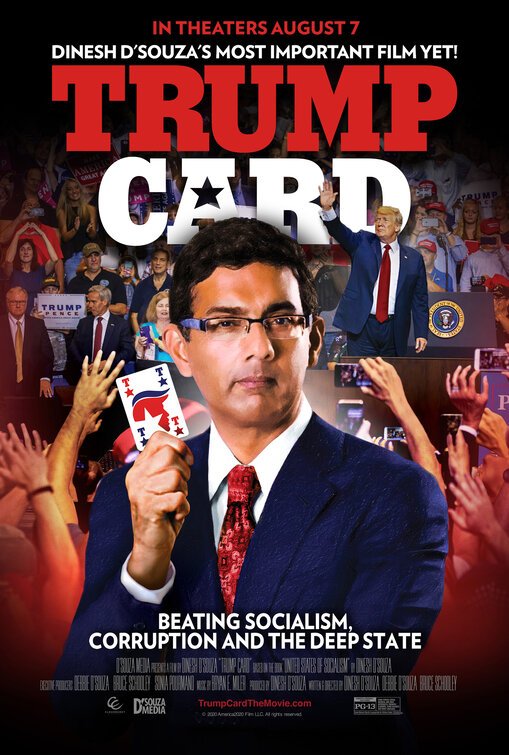 TRUMP CARD is conservative pundit Dinesh D’Souza’s documentary. It’s a spirited defense of the American Dream, liberty and democratic capitalism that exposes the evils of socialism. It argues that President Trump is America’s “Trump Card” against the new socialist movement gaining momentum in the United States and among Democrat Party leaders and their supporters in Hollywood and the “news” media. D’Souza interviews many people to make his case, including conservatives in minority communities. With their help, he clearly demonstrates the superiority of America’s political, economic system to the corrupt schemes of the new socialists. President Trump gets the last word, saying, “We are born free, and we will stay free.”

TRUMP CARD is available online for rent or purchase on SalemNOW. It’s a vigorous, rousing, astute defense of American liberty and capitalism against socialist tyranny. As such, it has a strong moral, Pro-American, capitalist, pro-life worldview supporting religious liberty and individual rights. However, the movie contains a couple obscenities, some images of street violence, and brief references to cocaine use and homosexuality. So, MOVIEGUIDE® advises strong or extreme caution for TRUMP CARD.

(BBB, PPP, CapCapCap, ACACAC, CC, Ho, L, VV, S, DD, M):
Dominant Worldview and Other Worldview Content/Elements:
Very strong moral, Pro-American, pro-capitalist, pro-life, and anti-communist and anti-socialist worldview, with a strong defense of religious liberty, including overt positive references to Christianity and Christian churches, plus some references to LGBT activism and a conservative activist admits he’s homosexual but says that’s not his only concern in life
Foul Language:
Two obscenities (an “s” word and an SOB) and a couple bleeped “f” words
Violence:
A scene recreates the torture scene from George Orwell’s book 1984 where the protagonist is tortured with electric shocks and finally succumbs to re-education, plus references to socialists and communists murdering more than 100 million people in the 20th Century, an image of Civil War soldiers running to battle, and newsreel footage of emaciated children in the Societ Union and of socialist thugs attacking people on the street, including attacks against an independent journalist and his bruised face afterwards in the hospital
Sex:
No depicted sex but references to alleged homosexual behavior by Barack Obama with a homosexual partner when he was an Illinois state senator and references to allegations of an adulterous heterosexual liaison between exotic dancer Stormy Daniels and President Donald Trump when he was a private citizen (movie asks why the press covered the Trump allegations ad infinitum but totally ignored the Obama allegations), a conservative activist admits he’s homosexual, and some references to LGBT activism
Nudity:
No explicit nudity but an interview with one witness apparently takes place in an empty strip club advertising “Live Nude Girls”
Alcohol Use:
No alcohol use
Smoking and/or Drug Use and Abuse:
No smoking but references to an allegation that Barack Obama snorted cocaine with a homosexual partner when he was an Illinois state senator; and,
Miscellaneous Immorality:
Movie discusses the evidence of corruption overseas in China, Ukraine and Iraq by Joe Biden and his family, and several other examples of leftists bias in Hollywood and the national “news” media.

TRUMP CARD is conservative pundit Dinesh D’Souza’s new documentary, which exposes the evils of socialism and the Democrat Party’s sudden lurch down the path of socialist tyranny, while offering President Trump and democratic capitalism as antidotes to this attempt to destroy the United States and its ideals. Available online for rent or purchase on SalemNOW, TRUMP CARD is a vigorous, rousing, astute defense of American liberty and capitalism against socialist tyranny, but it contains brief foul language, some images of street violence, and references to cocaine use and homosexuality.

Narrated by D’Souza, the movie starts with a recreation of the torture scene from George Orwell’s novel NINETEEN EIGHTY-FOUR, where the protagonist, Winston Smith, is given electric shocks by the lead undercover agent in London working for an oppressive socialist superstate. The scene fades out to D’Souza saying, “A spectre is haunting America. The spectre of socialism, corruption and the Deep State. America is divided. Capitalism or socialism. Free market or state control. Innovation and wealth creation or stagnation and poverty.” D’Souza goes on to say how socialism not only threatens individual liberty, but also threatens the American Dream. To illustrate his point, he shows clips of admitted socialist Bernie Sanders, the popular Democrat candidate for president and clips of socialist protestors marching in the streets. He says America got a taste of what kind of socialist tyranny these people envision during the COVID-19 pandemic, when Democrat politicians in city and state governments arrested Christian pastors for holding services outdoors. The movie cuts to a shot of the Democrat, lesbian mayor of Chicago, Lori Lightfoot, threatening to arrest anyone who violates her COVID-19 health “rules.” As an image of the 2020 Democrat primary candidates D’Souza says there are “powerful people” in politics, Hollywood and the “news” media who support transforming America into a socialist country, and “if you disagree, they will beat you into submission.” Cut to an image of leftist “protestors” beating up people on the street.

Some brief clips of President Trump speaking make the point that Trump stands in the way of this lurch toward socialist tyranny. He is America’s “Trump Card” against the new socialist movement gaining momentum in the United States and in the Democrat Party.

From there, D’Souza launches into a history lesson comparing the success of the American Revolution, where free market capitalism resulted in creating the richest country on Earth, with the communist revolution in Russia in 1917, which led to poverty, famine and mass murder. More than 100 million people were killed in the socialist tyrannies in the Soviet Union, Communist China and North Korea, he notes. D’Souza says his family left the socialist misery created in India after 1948 to enjoy the benefits of democratic, free market capitalism in the United States.

In the 1980s, however, President Ronald Reagan led the world in defeating socialist tyranny. India moved away from socialism and even Communist China reformed its economic system to allow some capitalist innovation and liberty. Both of these reforms drastically reduced the terrible poverty impacting the Chinese and Indian people under socialism. “Socialism is the most discredited idea after slavery,” D’Souza says.

However, the new socialists in America have made a comeback in recent years. They argue, first, that modern capitalism is inherently unjust. Second, they contend that socialism works in the Scandinavian countries. Third, they argue in favor of “identity socialism,” where they spread fear among minority groups, including black people, women, illegal aliens, and those who identify themselves as LGBT, to cobble together a majority of angry victims come election time. Fourth, they support a “democratic” socialism where, as communist Michael Moore says, “everybody gets a slice of the pie.”

In the movie’s middle portion, D’Souza destroys these four arguments one by one. He divides his discussion into several categories, including the “Socialist Dream” of a top-down economic system of “free stuff”; Identity Socialism; #FakeNews; “Thugs with Badges”; “Dirty Rotten Scoundrels”; “Obey Big Brother”; and, the socialist left’s “Scandinavian Illusion” that socialism works really well in countries like Denmark, Sweden, Norway, and Finland. To counteract the four socialist arguments, D’Souza interviews a black conservative comedian, a black actor, a conservative political activist who’s get out the vote organization was targeted by the FBI and the IRS, a Hispanic businessman, a conservative activist who’s homosexual, two Muslims, a man from Denmark and a man from Sweden, two women from Venezuela who saw first-hand how socialism destroyed their country, the leader of a conservative legal group defending religious liberty, an independent journalist who was almost murdered by violent leftist “protestors” in Portland, and his daughter, Danielle, who’s just written a pro-life book.

D’Souza also interviews George Papadopoulos and his wife, Simona, about how the Obama Administration and the FBI targeted them to smear President Trump and his campaign for allegedly colluding with Russia. He also interviews Peter Schweizer, who outlines the evidence of corruption overseas in China, Ukraine and Iraq committed by Democrat presidential candidate Joe Biden and his family, including his two brothers and his son, Hunter. It’s a wonder that Joe and Hunter have yet to be indicted.

Perhaps the most controversial part of the documentary is a comparison between the alleged affair between exotic dancer Stormy Daniels and President Trump when he was a private citizen, and the allegations by Larry Sinclair that he had a couple homosexual encounters with President Obama in 1999 when Obama was an Illinois state senator. The national “news” media totally ignored Sinclair’s allegation during the 2008 presidential campaign between Obama and Senator John McCain, but covered Stormy Daniels’ allegations ad infinitum in 2018. They did this even though the FBI actually tried to harass Sinclair after he made his allegations public. D’Souza cites this bias as a major example how the press goes after alleged Republican scandals but ignores alleged scandals involving the left wing of the Democrat Party.

The last few moments of TRUMP CARD delivers an argument as to why President Trump is, at this time, the best political fighter against the godless socialist tyranny favored by Democrat Party leaders and powerful people in Hollywood and the press. It ends with a rallying cry to destroy socialism, and to oppose government coercion and control. Trump gets the last word, saying in one of his State of the Union speeches, “We are born free, and we will stay free.”

Based on D’Souza’s book THE UNITED STATES OF SOCIALISM, TRUMP CARD is a vigorous, rousing, astute defense of American liberty and capitalism against socialist tyranny. The interviews are among some of the movie’s best parts. That said, TRUMP CARD could use a bit more jeopardy and dramatic conflict.

TRUMP CARD has a strong moral, Pro-American, pro-capitalist, pro-life worldview with positive Christian references. It supports individual rights, free market principles, religious liberty, limited government, and freedom of speech. It strongly opposes socialist tyranny of all kinds, including communism and Marxist political correctness. As such, it exposes the Anti-American, socialist agenda of the current leaders of the Democrat Party. One of the most important parts of the documentary is its revelations about the high level of corruption in the family of Democrat presidential candidate Joe Biden. However, the movie contains a couple obscenities, some images of street violence, and references to cocaine use and to a homosexual act allegedly performed twice by President Obama with another man. So, MOVIEGUIDE® advises strong or extreme caution for TRUMP CARD.

Ultimately, of course, America and the rest of the world, including their economies, institutions and governments, can only be reformed and redeemed by the power of the Gospel of Jesus Christ. Preaching the Gospel is the first priority, and that includes helping Christian converts to attain divine, biblical wisdom so they can overcome socialist tyranny and can transform themselves, their families, their churches, their schools, their society, and their governments through Christ.