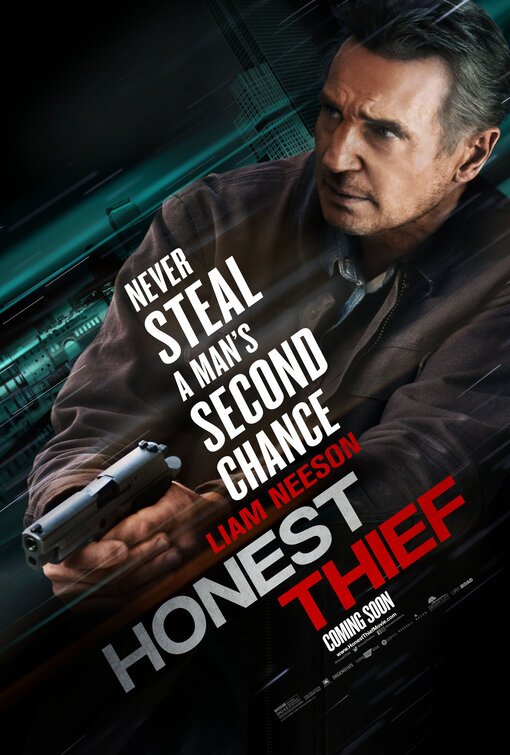 A thief who finds love, gives up everything to clear his name to become a record free man, but two FBI agents get in the way...

HONEST THIEF stars Liam Neeson as a notorious bank robber. Encouraged by his love of a good woman, Tom tries to turn himself in to the FBI and return the stolen money. However, two rogue FBI agents turn on him to take the money and frame him for the murder of their boss. Tom must find a way to stop these evil men, clear his name of the murder charge and, at the same time, protect the woman he loves.

(CC, BBB, PP, LL, VV, M):
Dominant Worldview and Other Worldview Content/Elements:
Strong Christian, redemptive worldview, with very strong moral, redemptive messages extolling justice, love, second chances, redemption, and doing the right thing, plus movie has a positive view of American police and the FBI, even though two FBI agents are corrupt, but they are brought to justice
Foul Language:
Nine obscenities (including one “f” word, one BS and one SOB) and two borderline profanities when man says, “Jesus, God,” upon discovering the woman he loves has been knocked unconscious and left barely alive by the ruthless main villain
Violence:
Plenty of strong and light action violence, and ruthless villains includes main villain shoots some people dead and fights and punches a woman to get by force some information she has, woman gets knocked unconscious, and hero must rush her to the hospital and carry her in his arms to the emergency room, car chases, gun battles, hero is framed for murder and has to fight a good FBI agent, but he recognizes the agent is not a crook like two other agents and lets him go, part of a house explodes, hero fights homicidal/crooked FBI agent trying to kill him, hero threatens the homicidal agent’s partner but encourages him to do the right thing and turn on his evil partner (the homicidal agent is unmarried and at one point expresses skepticism about being married and having children, but his partner is married with children so he eventually feels more guilty about going along with the other agent; he also tries to restrain the homicidal agent’s villainy)
Sex:
No sex scenes or implied/depicted sexual immorality
Nudity:
No nudity
Alcohol Use:
Brief alcohol use
Smoking and/or Drug Use and Abuse:
No smoking or drugs; and,
Miscellaneous Immorality:
Some lying, hero has robbed 12 banks and gets an adrenaline rush from doing it, but he wants to go straight and does, and crooked FBI agents steal money and try to frame innocent hero for murder, but their criminal activities are foiled.

HONEST THIEF stars Liam Neeson as a notorious bank robber, who tries to turn himself in to the FBI and return the money he stole, but two rogue agents turn on him to take the money and frame him for the murder of their boss. HONEST THIEF is a terrific, exciting thriller about justice, second chances and redemption, but there’s some foul language and gun violence, so caution is advised for older children.

After pulling 12 bank robberies in eight years, Tom, the “In and Out Bandit,” meets Annie, a divorced woman who’s finishing a doctorate degree in psychology. They meet at the storage business in Boston where Annie works.

A year later, Tom is ready to settle down with Annie. He decides to turn himself in to the FBI. Tom checks himself into a hotel and calls the FBI, claiming to be the In and Out Bandit. He speaks with local FBI agent Sam Baker, played by Robert Patrick (TERMINATOR 2 and CBS-TV’s SCORPION series), but Baker and his four-man team, including his right-hand man, Agent Sean Meyers (played by Jeffrey Donovan of the acclaimed TV spy series BURN NOTICE), are skeptical. They’ve had many other people claim to be the In and Out Bandit over the years. Tom says, however, that he can return all the money he stole, which comes to $9 million. Despite this, Agent Baker’s still skeptical. So, he assigns the two youngest members of his team, Agents Nivens and Hall, to meet with Tom at the hotel.

Even more skeptical than their boss, Nivens and Hall take two days to visit Tom. In the meantime, Tom calls Annie and tells her he had to get a room at the hotel because the people in the apartment upstairs had a terrible water leak in their bathroom.

In the hotel room, Hall and Nivens grill Tom about his claims, but Tom gives him details about how he broke into the banks and stole the money. After challenging him one more time, Tom gives them the key to the storage unit where he left the money.

At the storage unit, Nivens convinces Hall to steal the money themselves and lie about Tom. They decide to hide the money at an old FBI safe house in the city. While they’re loading the two boxes full of money into their trunk at the storage unit, Annie comes out to check on these two men who have opened Tom’s storage unit. They give her a story about Tom giving them the key to bring some stuff to him at the hotel where he’s staying.

While Nivens and Hall are at the FBI safe house hiding the money, Agent Baker gets concerned about what’s taking so long. He shows up at the hotel room just as Nivens and Hall are about to kill Tom and make it look like Tom shot at them first. After they let Baker into the room, he starts asking questions, including asking why Nivens is holding a gun. Suddenly, Nivens shoots him dead. Then, Tom, knowing that he’s about to be next, starts fighting Nivens and Hall.

Cut to Annie arriving at the hotel outside when Tom and Nivens come flying out of Tom’s second story hotel window and hitting an awning before tumbling to the ground. Tom manages to knock a gun out of Nivens’ hand and stun him with a couple of punches. He grabs Annie, and they quickly drive his jeep away from the hotel, but Nivens and Hall are quickly into their own FBI car giving chase. After a brief chase, Tom and Annie manage to give them the slip while Tom tries to explain to Annie what’s happening. Needless to say, she’s not happy, but Tom convinces her that meeting her was what made him stop robbing banks and want to surrender to the FBI. Whether she still wants to wait for him until he gets out of prison is still up to her. However, now that Nivens and Hall have taken the money and are trying to frame Tom for killing Agent Baker, turning himself into the FBI, facing prison time for robbing banks and trying to convince Annie to stick by him are the least of Tom’s problems.

What Nivens and Hall don’t know, however, is that Tom only gave them $3 million of the $6 million. Tom must find a way to tell the two rogue agents while staying alive. He also has to figure out how to keep Annie safe from these crooked cops, especially out of the crosshairs of the homicidal Nivens. Furthermore, what about Agent Sean Meyers? Will the death of his boss, Agent Baker, make Meyers less inclined to trust Tom’s version of what happened? How can Tom convince Meyers he’s not the bad guy?

Despite some possible plot holes*, HONEST THIEF is a terrific thriller, perhaps the best one Liam Neeson has done since the first TAKEN movie. Neeson and the rest of the cast are all great in it. Fans of Jeffrey Donovan from BURN NOTICE and Robert Patrick from TERMINATOR 2 and SCORPION, will love seeing them here. The chemistry between Neeson and Kate Walsh (GREY’S ANATOM Y), who plays Annie, is great. Walsh doesn’t just play the girlfriend. Her character is the reason that Neeson’s bank robber decides to turn himself in to the FBI. The ways that the script has of her character and the other characters interacting with Neeson’s character are very satisfying. Also, Writer/Director Mark Williams pares his movie down to a sleek 92 minutes or so (not counting the final credits). This was a wise choice. Not a moment in the movie seems wasted.

Ultimately, HONEST THIEF is a story of justice, love, second chances, and redemption. In fact, the movie was filmed in an Irish section of Boston where there’s practically a church on every corner. Images of these churches serve as a nice, deliberate Christian background to this tale of redemption. In addition, love becomes the reason the protagonist wants to repent and stop his life of crime. The movie also has a strong morally uplifting message about doing the right thing. Of course, HONEST THIEF does have some intense action violence, including some gun violence. However, the movie is free of lewd content and sexual immorality, and the foul language is kept to a minimum. So, HONEST THIEF is a satisfying redemptive thriller for mature audiences. MOVIEGUIDE® advises caution for older children because of the violence and foul language.

* Note: Sometimes, plot holes can be explained away upon a further analysis, or a second or third viewing.