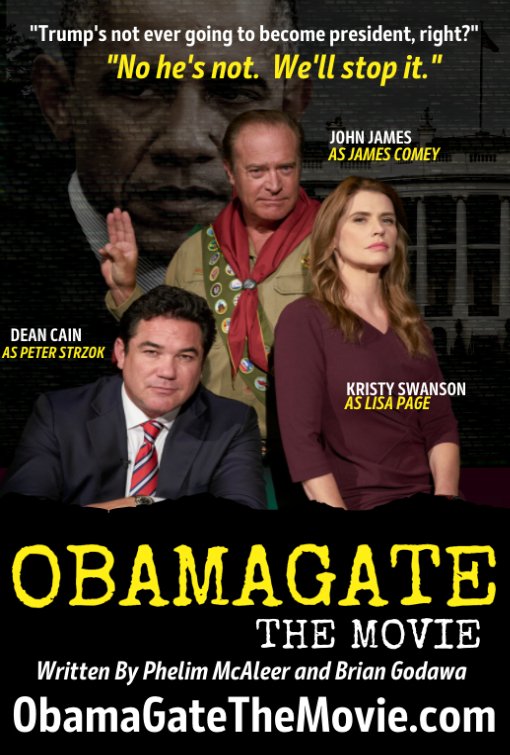 Taking into account its limitations as a televised play, OBAMAGATE is engaging, informative, well-acted, and sometimes funny. The televised play is a frightening indictment of political corruption in the Obama Administration. Although the texts, emails, tweets, and memos are verbatim, word for word, the actors do give them a dramatic and sometimes comical spin that may not be fully accurate. The video also contains a fair amount of foul language, including some bleeped out “f” words. The foul language in OBAMAGATE warrants strong caution, especially for younger viewers.

(BBB, PPP, ACAC, LLL, S, A, M):
Dominant Worldview and Other Worldview Content/Elements:
Very strong moral, patriotic worldview exposing and attacking government corruption under President Obama, focusing on two top FBI officials accused of extreme bias against President Trump and in favor of Trump’s opponent in the 2016 presidential race, Hillary Clinton
Foul Language:
17 obscenities (mostly “d” words), five strong profanities using Jesus, and 10 light profanities, plus some bleeped “f” words
Violence:
No violence
Sex:
No sex scenes but there are three or so verbal references to married man’s adulterous affair with a married colleague, and there are some vague comical allusions to that in the movie
Nudity:
Level and kind of nudity
Alcohol Use:
Man mentions he wants a glass of wine, but no alcohol use depicted
Smoking and/or Drug Use and Abuse:
No smoking or drugs; and,
Miscellaneous Immorality:
Government corruption and fraud but rebuked.