LILIES OF THE FIELD

"Presenting the Gospel in a Winsome, Heartwarming Way" 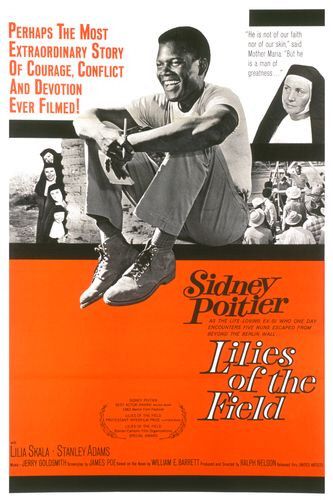 LILIES OF THE FIELD is a wonderful, uplifting drama about Homer, a traveling black man who’s handy with practically any tool. He stops to get water for his car at the retreat of a small group of German nuns. The stern head nun, Mother Maria, believes Homer’s presence is an answer to her prayer that God send someone to build them a chapel. She tries to get Homer to acquiesce. However, Mother Maria doesn’t have the money to afford the labor or the materials. Will her prayers be answered?

LILIES OF THE FIELD is a delightful movie, with a brilliant Oscar-winning performance by Sydney Poitier. LILIES OF THE FIELD has strong Christian themes of sacrifice, helping those in need, being neighborly, and working together as members of Christ’s body. It contains many moments where characters quote Scripture or sing Christian songs. In one song, Sydney Poitier presents the Gospel in a winsome, inspiring way that warms the heart. There is some talk about earning one’s way to Heaven through good deeds, but the Christian message shines brightly in LILIES OF THE FIELD.

(CCC, BBB, Ab, FR, L, N, AA, D, M):
Dominant Worldview and Other Worldview Content/Elements:
Very strong Christian, biblical, morally uplifting worldview where nuns are depicted positively, characters pray throughout the movie, characters read the Bible, and the main character carries one with him, multiple positive mentions of God, characters sing Christian songs, multiple answered prayers are depicted, and leading male character sings the Gospel in a delightful way, but some characters talk about skipping church because prayer doesn’t pay the bills, and an unbeliever talks about insurance for the afterlife as if he can earn his way to Heaven with good deeds
Foul Language:
One light obscenity and one light, borderline profanity when a character says “only God knows” in exasperation about another character’s plans to ask for handouts
Violence:
No violence
Sex:
No sex
Nudity:
Some upper male nudity in multiple shots
Alcohol Use:
Talk of alcohol, and a priest who drinks, and men dance and get drunk
Smoking and/or Drug Use and Abuse:
Priest smokes, but no drugs; and,
Miscellaneous Immorality:
Nun tries to use scripture to avoid paying a man what she owes him for his work.

LILIES OF THE FIELD is a wonderful drama about a traveling black man who’s handy with practically any tool, Homer, who stops to get water for his car at the dwelling place of a small group of German nuns. The stern head nun, Mother Maria, believes his presence is an answer to her prayer that He send someone to build them a chapel and tries to get Homer to acquiesce. LILIES OF THE FIELD has some strong positive elements which outweigh the small amount of negative content in the movie.

The movie opens with Homer on the road when his car starts to smoke. Upon pulling over to inspect the engine, he realizes he needs water for his car and decides to pull into a nearby property to obtain some. Upon getting out of his car, he is greeted by nuns who allow him to retrieve some water from their well. While Homer gets the water, Mother Maria negotiates with him to fix the roof on their home. Homer agrees to do so for a price and promptly gets to work.

Cut to the work’s completion. Instead of paying, Mother Maria invites Homer for dinner. Somewhat tethered to the sister because of the unpaid services, Home obliges and joins the nuns. Time passes, and Homer does more work before eventually realizing that Mother Maria has no intentions of paying him. After giving the sisters a ride to church, he learns they have no money.

Mother Maria tries to convince Homer to build a chapel for her, but he flatly refuses due in no small part to the unpaid services he already rendered, not to mention the fact that he planned to only pass through quickly. However, Homer finally decides to do the job for free with one stipulation. Mother Maria must somehow get the needed supplies for him to build the chapel. Mother Maria proceeds to do the only thing she knows. She prays for God to come through for her.

LILIES OF THE FIELD is a delightful movie, with a brilliant Oscar-winning performance by Sydney Poitier. His character learns to be a better man while he helps the nuns learn to be a bit more relaxed and welcoming. Lilia Skala is perfect as Mother Maria, and Stanley Adams is great as a local business owner. LILIES OF THE FIELD contains many heartwarming moments and displays strong Christian elements. It has a positive view of sacrifice, listening to God, prayer, Christian songs, church, and helping other members of Christ’s body. In one song, Sydney Poitier presents the Gospel in a winsome, inspiring way that warms the heart.

LILIES OF THE FIELD has some light negative elements where a nonbeliever thinks he can earn his way into Heaven, and the mother superior tries to use the Bible to get out of paying Homer what she owes him. However, this content is overshadowed by the movie’s strong focus on prayer, church, God, and working together as Christ’s body. The Christian message shines brightly in LILIES OF THE FIELD.

Watch LILIES OF THE FIELD: