THE MOST RELUCTANT CONVERT

"The Best Reasoned Journey of Transformation" 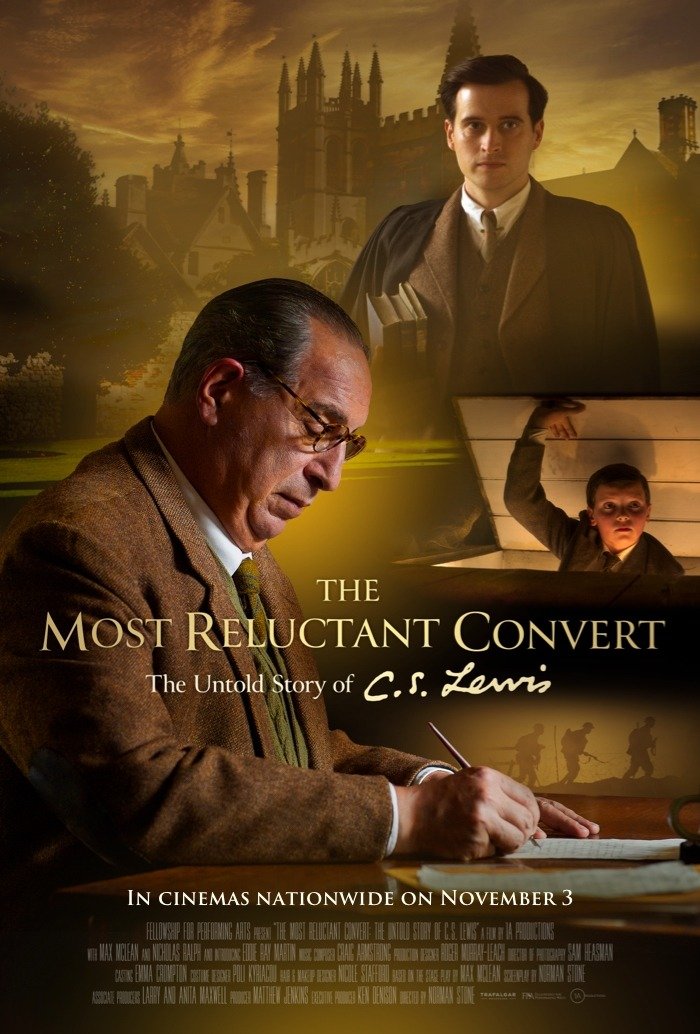 THE MOST RELUCTANT CONVERT is a drama about how C.S. Lewis went from being an atheist to one of the greatest defenders of the Christian faith in the 20th Century. It opens with Max McLean nervously checking his script, and then walking onto the set, where he becomes C.S. Lewis reminiscing about his conversion. Some scenes are re-enacted with actors. The movie details Lewis’ sad childhood, his exploits during World War I, and his life at Oxford University, where he encountered Christians. By 1929, Lewis reluctantly became a theist, and by 1933, a full believer in Christ, and one of the most influential Christian apologists of all time.

(CCC, L, VV, S, A, D, M):
Dominant Worldview and Other Worldview Content/Elements:
Very strong Christian worldview in a story about an atheist who blasphemes God coming to a rational, deep, explicit faith in Jesus Christ
Foul Language:
One “h” obscenity and lots of discussion of the painful death of a mother by cancer and the horrors of World War I
Violence:
Scenes of mother dying with nurses holding her down because people were operated on at home and battle scenes of World War I where friends are killed, maimed and mutilated and title character is shot
Sex:
Young boy lusts after teacher, and in the Army hospital, a pretty nurse steps behind a hospital screen to fornicate every night with one of the other soldiers with a few giggles heard on the soundtrack
Nudity:
No nudity, but the nurse, in the shadows, starts taking off her clothes
Alcohol Use:
Alcohol use and discussion about staying up all night
Smoking and/or Drug Use and Abuse:
Smoking; and,
Miscellaneous Immorality:
Father is very hard on his two sons, just as fathers were at that time, and his father breaks down completely when his wife dies and never recovers.

THE MOST RELUCTANT CONVERT opens with Max McLean nervously checking his script, before walking onto the set, where he becomes C.S. Lewis reminiscing about his conversion with some scenes that are re-enacted with actors. Surprisingly, this “you are there” approach where Max McLean is C.S. Lewis speaking to us as if he were telling his story, is extremely powerful.

After he becomes C.S. Lewis, he waxes eloquent on why he was an atheist, seeing the universe as empty, senseless and chaotic with pain. He goes out on the commons of one of the colleges at Oxford and proclaims how terrible life is, using the word Hell. He summarizes that, during World War I, which was the low point in his life, he never sank so low as to pray. He tells viewers his father was a solicitor with a large home in Ireland but was always saying you have to work, or you’ll be a pauper. On the other hand, his mother had a talent for happiness. Like any young boys, he and his brother Warnie, got into all sorts of mischief, which the father condemned, but his mother said, “boys will be boys.”

All of this happy childhood was destroyed when he was told his mother had cancer. In those days, operations occurred in the home, and the horror of the operation and her deteriorating situation made life miserable. He says when his mother died, all happiness died, and his father never recovered. He says he prayed to God and wasn’t answered. So, he became convinced God didn’t exist or that He was evil, and he ceased to be even remotely connected to Christianity.

Rummaging through the many books in the house, he got interested in mythology and felt Jesus was just a cult where, like Hercules, whom, when he died, people made Him a god. Also, he says he lusted for his dance instructor and clarifies it’s not puppy love or admiration, it was just lust.

With the death of his mother, he turned into a fop and a snob, even daring to disagree with his father who had been a legal prosecutor. He says he moved away from Christianity, into blasphemy. His father sent him to Surrey, England, to study with William T. Kirkpatrick, whom everybody called “The Great Knock.” Kirkpatrick was a ruthless dialectic philosopher, and Lewis describes him as a Presbyterian atheist, but he taught Lewis how to think and immersed him in the classics.

Later, the writings and thinking of William Butler Yeats, whom he finally met, introduced him to the occult, and he descended from atheist eccentricity to perversity. Then, stumbling on a book by the great Christian author, George Macdonald, gave Lewis a glimpse of the light and a desire for joy, which he says is not happiness, but a deep longing for a truth ‘not yet attained.’

At 18, he arrived at Oxford. He became enamored of Christian author G.K. Chesterton, but not his Christian commitment, and then went off to the First World War. Soon hospitalized, his night nurse was having an affair with the soldier in the next bed. When he returned to duty, his troop was shot up, and he was shot and seriously wounded.

Back at Oxford, he became an ardent student and, and by his mid 20s, became a tutor at Magdalene College. One of his friends, Owen Barfield, became a theist because he said mind and reason must be more just random atoms colliding in skulls. Soon, Lewis was surrounded by Christians. Often, they stayed up all night smoking and drinking discussing with Lewis how Jesus couldn’t have been just a good moral teacher, because Jesus claimed to be God. He was therefore either God, insane, or evil. By the Trinity term of 1929, Lewis reluctantly became a theist, but not a Christian. His resistance to Christianity continued, but Christian author J.R.R. Tolkien had a great impact on him, and the rest of the story tells how Lewis became one of the greatest apologists of his age.

The unique format of this movie, which resembles a format Steve Allen and others used during the early days of television, is extremely powerful. Max McLean does a terrific job as Lewis, and the actors bring the story alive. Having gone through a very similar arc from paganism to Christianity in my life, including the death of my mother when I was young, I was deeply moved by this movie, trying to untangle my own emotional connection to this story.

THE MOST RELUCTANT CONVERT is a tremendous movie to show to non-Christian friends, who, if they’re thinking at all, may be led by the careful arguments Lewis makes into the very logical conclusion that Jesus Christ is Lord and Savior. The movie is probably not for young children with the death of the mother, the collapse and lack of a father’s love, the horrors of World War I, and other elements, but, for teenagers and above, it’s a great movie.

Watch THE MOST RELUCTANT CONVERT: