"An Edge of Your Seat Tour de Force" 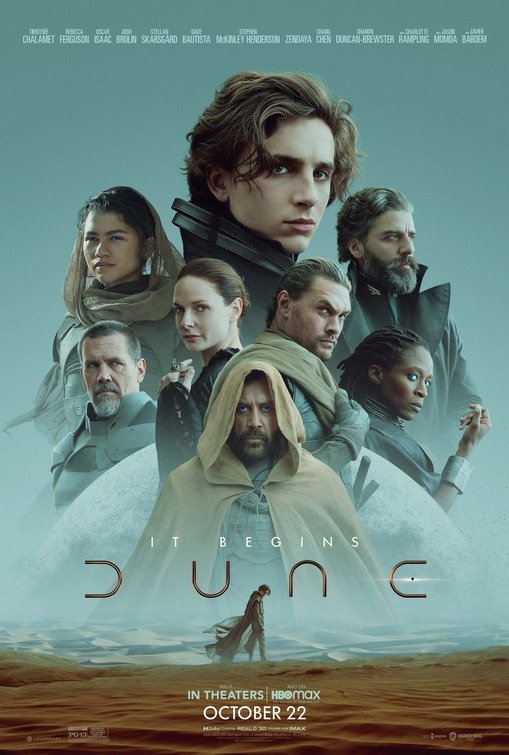 (BBB, PPP, C, L, VV, N, DD, MM):
Dominant Worldview and Other Worldview Content/Elements:
Very conservative worldview about people looking for a savior and fighting for their independence against a powerful, nefarious, cruel Emperor and his vile cohorts, with some Christological themes and one or more references to God but they’re general
Foul Language:
One light profane expletive, three light obscenities
Violence:
Action violence with many battle scenes and hand-to-hand combat and with action violence such as ornithopters crashing, big spaceships crashing, threats of poisoning, torture, and actual poisoning, beheadings, one long shot of people on stone tables being bled to anoint the armies with their blood by putting a dot of blood on the forehead, scary giant worms swallow ships and people, but all of the violence cuts away from blood and gore and is reminiscent of big action movies of yesteryear, with one very brief scene of holding a head which is partially obscured
Sex:
The Duke and his companion/wife appear in bed together, but there’s no sex, and a vision of kissing occurs where the girl stabs the hero
Nudity:
Scenes of upper male nudity, apparent but not explicit male nudity, including the Duke having been shot with a poison dart draped across a chair where private portions can’t be seen
Alcohol Use:
No apparent alcohol use
Smoking and/or Drug Use and Abuse:
A family doctor gives the Duke and his son sleeping pills, and the movie’s whole theme involves a desert planet’s only natural resource, called spice, which the narrator says is a hallucinogen and a medical rejuvenator for the planet’s natives, but which also is coveted by the Empire because it also powers their space travel, and without it they couldn’t do the space travel, and the spice seems to power the hero’s prophetic visions, but he’s the only one who apparently gets the visions, which are part of his natural abilities that have been bred into him over centuries by one of the Empire’s major political and social factions, which poses as a mystical religious order; and,
Miscellaneous Immorality:
Some strong miscellaneous immorality, directly and implicitly rebuked, such as Emperor builds his power by nefarious means and by pitting one faction against another faction, hero’s mother belongs to a secret female religious society and carries the bloodline of the Emperor, the secret religious society is called at one point witches, the ruler of one faction has the power to levitate, uncontrolled appetite and other lusts, and many betrayals and deceits occur.

At last, there’s a big Hollywood movie that captures your imagination and emotions: DUNE. With an international cast, futuristic science fiction settings and medieval political institutions, DUNE is a fascinating movie with obvious coming-of-age elements, nods to and strong emphasis on mind expansion as well as clear Christological themes, some very good dialogue, and statements about freedom and individualism.

On another planet, the Duke of that planet, is raising his son, Paul, to succeed him. Duke Leto tells Paul he will be the next leader, but Paul doesn’t want to assume that responsibility. Leto tells his son he didn’t want to be Duke either, but that leadership is a calling, not something you seek. He also says to Paul, in one of the movie’s great lines, that, no matter what Paul decides, he will be loved as his son. Paul has visions of the desert planet where, because of the spice, the oppressed natives, called Fremen have bright, dark blue eyes. In his vision, Paul sees a girl, and they fall in love, but she stabs him when they kiss pasionately, and a vision of her bloody hand occurs several times throughout the movie.