"Helping Other People with a Smile" 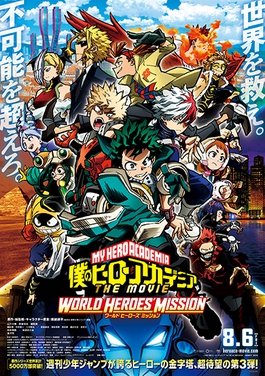 MY HERO ACADEMIA: WORLD HEROES’ MISSION is the third in a series of popular, animated Japanese movies. In this one, a young superhero named Deku goes against a powerful cult leader intent on releasing a series of bombs to target and kill all the superheroes around the world. The world’s superheroes try to locate the bombs. Meanwhile, young Deku meets a new friend. Together, they uncover the location of the cult leader’s secret lair. They travel to the cult leader’s lair to confront him and turn off the device controlling the bombs.

MY HERO ACADEMIA: WORLD HEROES’ MISSION has lots of exciting action, but some of the fighting gets repetitious, especially at the end. Like the best animated Japanese movies and TV programs, the movie inserts the kind of quirky, clean, endearing humor that makes them so delightful. Even better, the movie has a strong moral worldview where the main hero, Deku, believes in using his superpowers to help people “with a smile.” That said, the violence at the end of WORLD HEROES’ MISSION contains strong bloody images, so MOVIEGUIDE® advises extreme caution.

(BB, LL, VVV, N, M):
Dominant Worldview and Other Worldview Content/Elements:
Strong moral worldview where a young superhero believes in using his superpowers to help people “with a smile,” and that’s pretty much what he does throughout the movie, even when he, a new friend, and his two other friends go up against a murderous cult leader who wants to get rid of all superheroes
Foul Language:
14 exclamatory “d” obscenities, and people are called “bastards” three times
Violence:
Lots of strong action violence such as energy blasts, explosions and superheroes fighting supervillains, but two hero characters during the lengthy climactic battle are weakened by bloody wounds (one character has a bloody wound on the side of his torso, and he staggers down a hallway smearing blood on the wall and eventually on the floor where he collapses until the villain is finally defeated)
Sex:
No sex
Nudity:
Some upper male nudity, and one minor female character shows plenty of cleavage in one or two scenes
Alcohol Use:
No alcohol use
Smoking and/or Drug Use and Abuse:
No smoking or drugs; and,
Miscellaneous Immorality:
The villain is motivated by revenge against the world of superheroes, because his superpowers have made him unable to have any close friendship or intimacy with any other person, and villain and his minions repeatedly say killing all the superheroes will be the “salvation of humanity,” but this is rebuked.

MY HERO ACADEMIA: WORLD HEROES’ MISSION is the latest in a series of relatively popular, animated Japanese movies and in this one, three young heroes with superpowers go up against the head of a powerful cult leader and terrorist intent on releasing a series of bombs to kill all their fellow heroes around the world. Based on a Japanese TV series and comic book, WORLD HEROES’ MISSION has lots of exciting action and the kind of endearing humor that the best Japanese animated movies do excel, but some of the action is repetitious and the violence at the end contains strong bloody images, so MOVIEGUIDE® advises extreme caution.

MY HERO ACADEMIA is set in a world where 80% of humanity has developed special powers called quirks. Some quirks give the person superpowers. As a result, a group of superheroes has formed who protect all people from supervillains. The heroes have created training centers for younger people who want to join them, and three such young men at one training academy, Deku, Shoto and Dynamight, have become interns to Japan’s most popular superhero, Endeavor.

In the first act, a mysterious cult leader’s minions release a special bomb in a major city that targets and kills many nearby people with powerful quirks and weaker quirks. The cult leader, Flect Turn, and his group, Humarise, want to destroy all the superheroes and supervillains because they believe the quirks will lead eventually to humanity’s destruction. Flect figures that, if they can kill the people with the most powerful superpowers, the people with limited special powers will more likely support leaders who have no powers at all. He announces to the world his intention to release more of these bombs in major cities around the world.

All the world’s heroes go into action trying to locate all the bombs to dismantle them before they explode. Of course, this plan actually plays into the villain’s hands, because he wants to kill as many superheroes as he can with these bombs.

Meanwhile, Deku, the main hero of the MY HERO ACADEMIA franchise, and a new character, Rody Soul, find themselves on the run from the law and Humarize when Deku is blamed for several murders committed by the cult and Rody accidentally carries a briefcase with papers revealing the location of the cult leader’s secret lair and the key to stopping the bombs. Eventually, Deku’s two friends, Soto and Dynamight, accidentally meet up with Deku and Rody, and Deku locates the secret lair’s location. The four heroes confront the cult leader and two powerful minions guarding him and the lair. Can they get past these villains to stop the bombs? Can their friends around the world find the location of the bombs?

MY HERO ACADEMIA: WORLD HEROES’ MISSION has lots of exciting action, but some of the fighting gets repetitious, especially at the end. Consequently, the climactic battle seems too drawn out. The movie has a lot of character development between Deku and Rody, however. For example, Rody is the sole guardian of his younger brother and sister. Rody tells Deku their mother died when the youngest one was born. Then, their father suddenly disappeared. His disappearance has made Rody bitter, but it turns out [SPOILER FOLLOWS] the cult had kidnapped his father and forced him to create the new bombs before killing him. Finally, like the best animated Japanese movies and television programs, WORLD HEROES’ MISSION inserts the kind of quirky, clean and endearing humor that makes them so delightful. For example, Rody is accompanied by a cute little pet bird who follows him wherever he goes. Eventually, the movie reveals that the tiny bird is the key to Rody’s own special power.

Happily, perhaps the best thing about WORLD HEROES’ MISSION is Deku’s optimistic, compassionate attitude about being a superhero. Several times during the movie, Deku says he wants to use his superpowers to help other people, but always with a smile. That’s pretty much what he does throughout the movie, even when he has to battle the bad guys.

That said, during the climactic battle between Deku, Rody and the evil cult leader, Deku suffers several bloody wounds, and Rody is seriously wounded in his side. [SPOILERS FOLLOW] While Deku distracts the cult leader, Rody and his bird friend head down a corridor with the key to the device controlling all the bombs. However, because of his bloody wound, Rody staggers down the corridor, smearing the wall, and collapses in front of the device. Can he crawl to the device and use the key? [END SPOILERS]

Because of the bloody images during the climactic battle, MOVIEGUIDE® advises extreme caution for MY HERO ACADEMIA: WORLD HEROES’ MISSION. The movie also has 14 “d” obscenities. WORLD HEROES’ MISSION is not an appropriate movie for younger pre-teens or sensitive young teenagers.