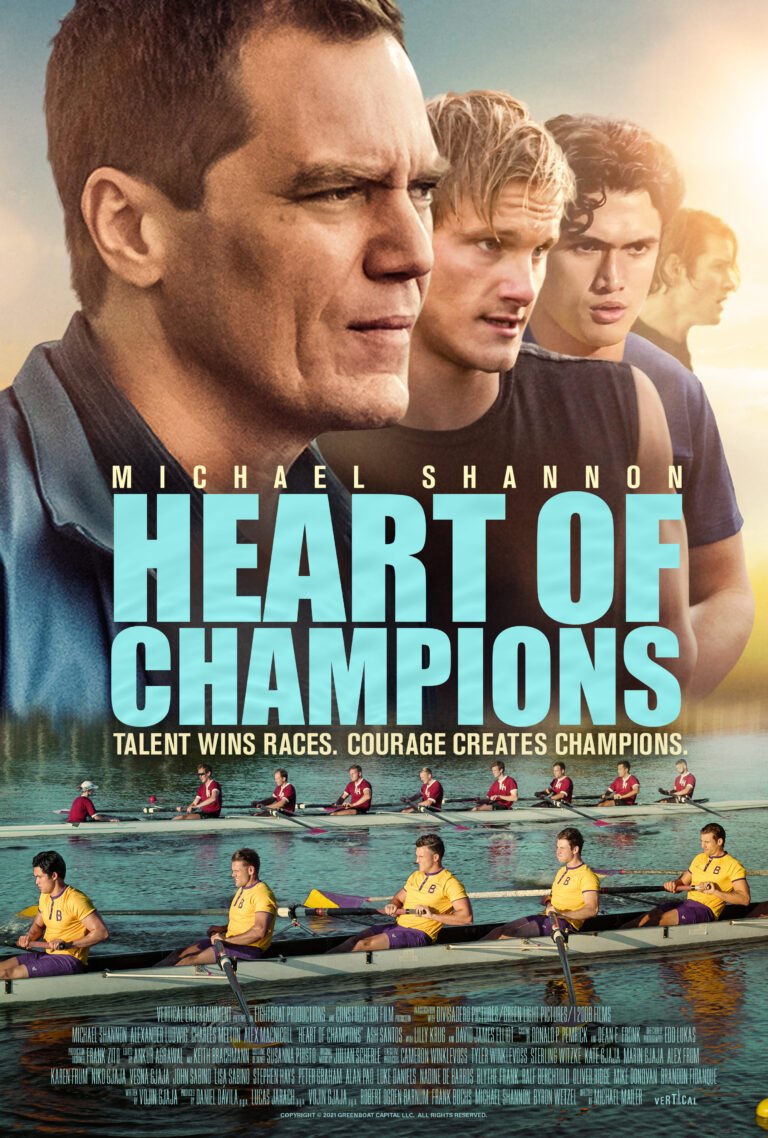 HEART OF CHAMPIONS is a feel-good sports drama about a struggling Ivy League rowing team that learns the importance of working together to achieve the impossible. Army Vet Coach Murphy is selected as the new coach four months after the team fell apart in a championship match, coming in last place. Murphy employs unorthodox methods and real-life experience as a combat soldier to teach the boys that “no man is an island.” Personal conflicts in the team, and one member’s personal issues, are difficult obstacles to overcome.

HEART OF CHAMPIONS pulls hard on the heartstrings. Beautiful relationships highlight the need for love, friendship and teamwork. The movie stresses doing the right thing under pressure, kindness and consideration toward others, and victory over loss. HEART OF CHAMPIONS has some great acting and intense rowing competitions. The cinematography on the water is outstanding. However, a complicated subplot drags a bit. Also, two unmarried characters have a sexual affair that evolves into a loving relationship. Their relationship in HEART OF CHAMPIONS, along with some fight scenes, partial nudity, drunkenness, and strong foul language, warrants extreme caution.

(BB, C, FR, Pa, Ab, LL, VV, S, NN, AA, M):
Dominant Worldview and Other Worldview Content/Elements:
Strong moral worldview with some redemptive elements promotes the importance of healing, doing the right thing under pressure, kindness and consideration toward others, victory over loss, and teamwork, but there are a few references made about throwing jerseys into the river in order to appease the “river gods,” and some unbiblical behavior where love between a couple is only discussed after the two have fornicated together
Foul Language:
About 19-21 obscenities and profanities include one “f” word, a gesture of an “f” word, nine uses of the “s” word, one use of the Lord’s name in vain, a few “h” words, one use of a**, and a few anatomical obscenities
Violence:
A few fists fights, one fight leads to a fatal accident, character gets into bed with a drunk girl, but doesn’t touch her
Sex:
Implied fornication, an unmarried couple is shown in bed together a few times, and there’s some kissing
Nudity:
Partial upper female nudity, brief rear male nudity, upper male nudity, and a college has the “Nude Olympics” in the snow
Alcohol Use:
Some alcohol abuse such as a main character is alcohol-dependent, but it’s rebuked and corrected until he has a relapse that costs him his life, a college woman gets drunk, and a few characters have hangovers
Smoking and/or Drug Use and Abuse:
No smoking or drugs; and,
Miscellaneous Immorality:
Some strong and light miscellaneous immorality includes cruel comments by an abusive father and some bullying.

HEART OF CHAMPIONS is a feel-good sports drama about a struggling Ivy League rowing team that enlists an Army vet, Jack Murphy, to be the new coach, after they come in last place at the championship race. Coach Murphy has unorthodox methods to promote leadership, strength of character, conviction, and the central importance of teamwork. The movie takes viewers on a gripping ride which accents victory over loss and community over isolation. There is some sexual content which includes partial nudity, foul language (including one “f” word and one Jesus profanity), along with a few fight scenes, drunkenness, and an accidental drowning, so extreme caution is advised.

The movie opens with heart-racing rowing competition between top Ivy League schools. When the team that could have taken it, all takes last place, the team leaders fight publicly about who’s to blame.

Flash forward four months. The college hires a new coach, Army Vet Jack Murphy, to help the failing team make it to the next championship. The team leaders, John and Alex, have major disagreements and motives. John is the All-American guy who holds the respect and esteem of his teammates. Alex, who’s cruelly pushed and bullied by his overbearing father, a leading figure at the school, is in the game for himself. He wants to win at all costs and make it to the United States Olympic team. It doesn’t help that the two team leaders are caught up in a love triangle with John’s girlfriend, Sarah.

At the first practice of the season, Coach Murphy asks each player to write down why they are there. When no one can give a correct answer, Murphy incorporates unorthodox and grueling exercises to help unify the team. A new crew member and John’s new roommate, Chris, is introduced a bit late into the movie. Chris has no interest in rowing other than his scholarship, which allows him to attend the college. The more John tries to connect Chris with the team, the more he realizes Chris is haunted by memories of his past. Coach notices Chris’ aversion to rely on anyone. He works with him in a convincing manner to teach him to “work together to achieve the impossible as a team.”

Meanwhile Alex’s lust for center stage begins to rip the team apart. Coach Murphy changes things and puts John at center stage. Alex is downgraded, which will make it impossible to be selected for the Olympics. Can Alex handle John’s success and leadership? Will Alex’s controlling, abusive father retaliate and ruin the entire team’s chance at the championship?

HEART OF CHAMPIONS pulls hard on the heart strings with beautiful relationships that highlight the need for love, friendship and teamwork. The movie’s moral worldview also stresses the importance of healing, doing the right thing under pressure, kindness and consideration toward others, and victory over loss. It has some great acting and intense rowing competitions. The cinematography on the water is outstanding. However, there is a complicated subplot that makes the story drag a bit. Also, two unmarried characters engage in some implied premarital, “pre-love” fornication, which ultimately evolves into a loving relationship. This relationship in HEART OF CHAMPIONS, along with some fighting scenes, partial nudity, a drowning, some drunkenness, and some strong foul language warrant extreme caution.