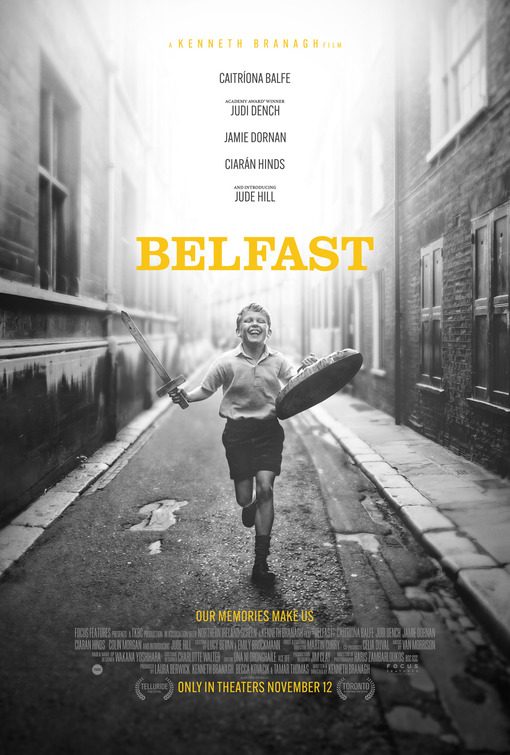 BELFAST is a beautifully crafted drama about the lives of a young boy, Buddy, and his Protestant family in the Northern Ireland town during the Fall and Christmas of 1969. It’s a time of social upheaval when tensions between Protestants and Catholics break out into violence. Buddy’s father and mother argue about moving the family to England, where the father has a possible permanent job and house arranged for them. Meanwhile, Buddy explores the mysteries and joys of life through his relationships with his parents, grandparents, his cousin, a pretty girl in his class, and the culture around him.

(CC, BBB, FR, Ab, LL, VV, A, M):
Dominant Worldview and Other Worldview Content/Elements:
Strong Christian, moral, pro-family worldview about a young Protestant boy and his family trying to appreciate the mysteries and joys of life in 1969 Belfast when violence breaks out between Catholics and Protestants, with a scene containing a lengthy recitation of the ending of 1 Corinthians 13, Protestant Pastor gives a fiery talk about Heaven and Hell that piques the young boy’s imagination, and delightful heartwarming scenes between the boy and his parents and grandparents and the culture around him that extols doing the right thing, faith, compassion, Godly love, gratitude, peace, courage, standing up to bullies, and joy, but the father makes a universalist comment in one scene that undermines the New Testament warning against being unequally yoked
Foul Language:
Nine or 10 obscenities (including one “f” word, one possible “f” word, and an “s” word with an “e” at the end of it, which is how Irish or Scottish people sometimes say it), four strong profanities using Christ, and seven light profanities saying OG or “Holy God”)
Violence:
Some strong and light violence includes scene where a mob of masked men riot through a small neighborhood smashing windows, and (at one point) setting fire to a large car’s gas tank, and the car explodes, a scene where a mob of people crashes through a small grocery store to loot it, and a young boy is forced into joining them by an older girl, the young boy enters the store and takes a large box of detergent, but the boy’s mother makes him take it back, but they get trapped in the riot when the police come, some smaller explosions during these two riots, boy and girl fight each other with wooden swords and round shields in one scene, soldiers with guns monitor the Irish neighborhood’s barricades and barbed wire to ensure peace between Protestants and Catholics, two scenes from two Hollywood westerns are shown with some threats of gunplay, bad young man threatens boy’s father to join a group of Protestant vigilantes to give them money father throws a hardball to knock a rock from his older son’s head, some rocks are thrown, bad young man pulls a gun, but it’s knocked out his hand, and he’s arrested, a character dies of natural causes
Sex:
No sex
Nudity:
No nudity
Alcohol Use:
Light infrequent alcohol use
Smoking and/or Drug Use and Abuse:
No smoking or drugs; and,
Miscellaneous Immorality:
Three children shoplift from store, and young boy comes away with a small pack of Turkish Delight, and older girl berates him because they hate Turkish Delight (she wanted him to steal a bunch of chocolate from the store, but he turns out to be a pretty incompetent thief, which upsets her).

BELFAST is a beautifully crafted drama about the lives of a young boy and his Protestant family in the Northern Ireland town during the Fall and Christmas of 1969, in a time of social upheaval when tensions between Protestants and Catholics broke out into violence. Filmed in black and white, BELFAST is a brilliant, life-affirming, dramatic, funny, and sometimes heartbreaking movie with positive Christian, redemptive, inspiring content, but the movie contains some strong foul language, two scenes of rioting and looting, and a universalist comment that undermines the New Testament biblical warning against being unequally yoked.

The movie opens on August 15, 1969 in a little neighborhood in Northern Belfast, North Ireland. Buddy, a young blond-haired, freckle-faced 9-year-old Protestant boy, is enjoying sparring with his older cousin, Moira, with wooden swords and round shields. Buddy, his older brother Will, his parents, and his grandparents live on a street that’s mostly Catholic. Buddy’s father is away in England, where he has a job that takes him away from the family for two weeks or more at a time. Suddenly, a group of masked Protestant men marches into their little enclave and starts smashing local stores and home windows. They even set fire to the gas tank of a large car, which explodes. Buddy flees from the violence into his house, where he, his brother and their mother cower under the small dining room table as the mob smashes their windows.

In the coming months, Belfast erupts into regular violent conflicts between Protestants and Catholics. Buddy tries to make sense of it all, including the words of the family’s Protestant pastor about Heaven and Hell and the Catholic practice of Confession, which seems to give them a “get out of jail free” card when it comes to sin.

Meanwhile, Buddy develops a crush on Catherine, a smart, pretty blonde girl in his class, and works on his grades to sit next to her. His beloved grandfather help Buddy with his math, and Buddy moves up a couple seats to be Number Two, only to find that Catherine fell back to Number Four behind him!

Buddy watches carefully as his family tries to cope with the social chaos, the barbed wire barricades and British soldiers trying to maintain the peace. As the weeks march toward Christmas, Buddy’s parents start arguing about whether to stay in Belfast or go to England, where Buddy’s father’s employer offers him a little house with a garden for him and his family. Buddy’s mother, however, is reluctant to leave the world of family and friends she knows so well.

At the same time, one of the leaders of the Protestant vigilantes, Billy Clanton, threatens Buddy’s family if the father doesn’t join the group or give them some money. Also, Buddy’s cousin, Moira, piques Buddy’s interest in joining some “secret gang.” “What’s it called?” he asks her. That’s a secret, she says. “What does it do?” he asks? That’s a secret too, she repeats, “Who’s in it?” he asks. That’s a secret, she tells him again.

While Buddy continues to explore the mysteries and joys of life in talks with his parents and with his grandparents, Billy Clanton keeps threatening his father. Can Buddy’s father be the hero he needs him to be, like the heroes in the classic American westerns Buddy loves to watch on TV?

Though filled with dramatic, poignant, touching, and even heartbreaking moments, BELFAST is also filled with lots of humor and joy. Buddy shares all these myriad moments with his family and friends. BELFAST is beautifully written and directed by Kenneth Branagh. Branagh elicits great performances from all his players, including newcomer Jude Hill, who plays Buddy. Many of the scenes between Buddy and the other characters are delightful and heartwarming. There are also moments of excitement, exhilaration and suspense in BELFAST. Eventually, the conflict between Buddy’s father and Billy reaches a very satisfying, exciting climax and resolution. However, the decision whether to leave Belfast or not, rolls to a final heartrending conclusion.

BELFAST has many positive Christian, redemptive and morally uplifting moments. One of the best is a quotation from 1 Corinthians 13 from the family’s Protestant pastor. It’s one of the most soul-stirring, heartfelt scenes ever made. The movie also contains superbly written and performed, heartfelt, morally uplifting, redemptive scenes between Buddy’s parents, between Buddy and his parents, between Buddy’s grandparents, and between Buddy and the culture around him. Buddy’s attempt to find a way to woo the blonde girl in his class have a delightful innocence and earnest manner. BELFAST not only celebrates family, it also extols doing the right thing, faith, compassion, Godly love, gratitude, peace, courage, and joy. All of this is accompanied by the soulful songs of Van Morrison.

Sadly, though, BELFAST has about 20 bad words, including at least one “f word and four strong profanities. There are also two scenes of rioting and looting, plus scenes of great jeopardy. Finally, Buddy’s Protestant father makes a universalist comment about Buddy potentially marrying his Catholic girlfriend. The father tells Buddy it wouldn’t matter to him if she were a Hindu or an antichrist. He makes a little joke of it at the very end of the comment, but the gist of his comment violates the Bible’s warnings in 2 Corinthians 6:14 and Ephesians 5:7 against being “unequally yoked” with people who aren’t of the same faith.

All in all, therefore, MOVIEGUIDE® advises caution for older children and young teenagers. That said, BELFAST is a brilliant, delightful, heart-stirring movie for mature viewers.