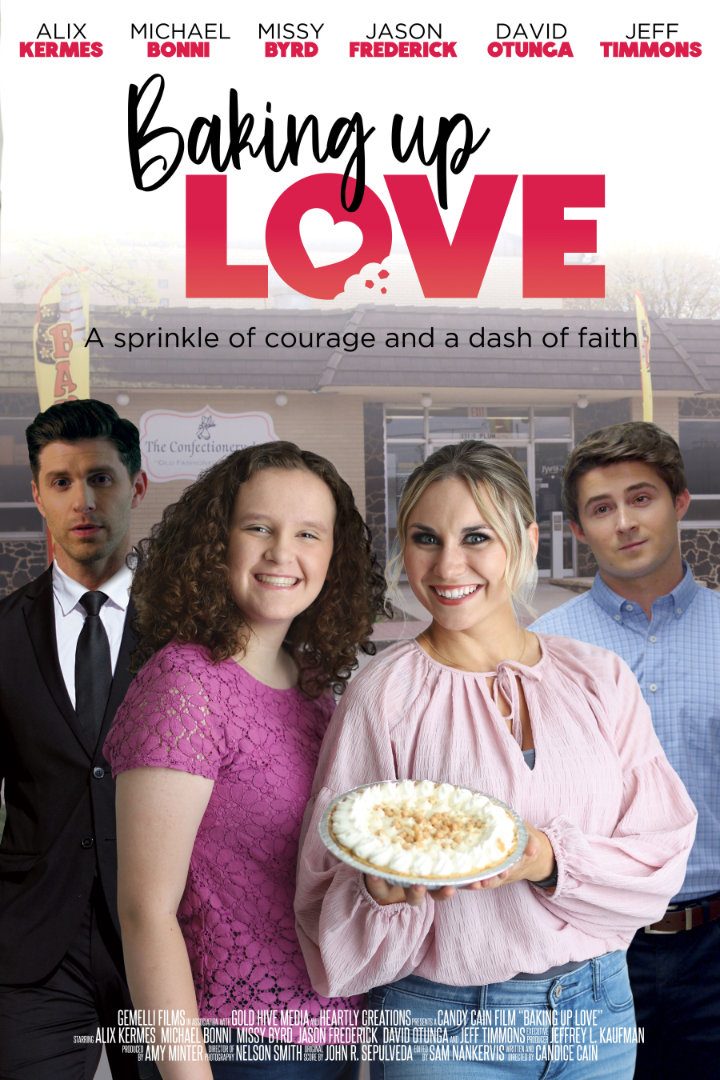 BAKING UP LOVE is a light romantic comedy streaming on Pure Flix. Lynn Travis is the best baker in Morton, Illinois. Pierce Morgan, a bigtime Chicago businessman, comes to Morton for Pumpkinfest, to announce a bake-off competition offering a $1 million grand prize. It seems perfect for Lynn, but everyone in Morton knows how her pumpkin pie tastes. So, she enters another of her famous desserts. To add to the plot, Lynn’s niece comes to stay with her for the summer and her best friend, Peter, has feelings for her, but so does Pierce.

BAKING UP LOVE becomes a little farfetched. Also, the sound is sometimes choppy. However, it has a cute plotline and solid acting. Best of all, BAKING UP LOVE has a strong Christian, moral worldview. For example, the movie extols prayer, community service, friendship, repentance, charity, and church. It also has a positive portrayal of a Christian pastor. However, there are some light Romantic elements about falling in love and dreaming about the future. On the whole, though, MOVIEGUIDE® finds BAKING UP LOVE an inspiring movie for the whole family.

(CC, BB, Ro, A, M):
Dominant Worldview and Other Worldview Content/Elements:
Strong Christian, moral worldview stresses the value of community, community service and friendship with depicted prayer, a positive portrayal of a Christian pastor and one scene where a teenager repents of pride in front of a congregation, plus movie promotes and donating resources to the local church, and there are some light Romantic elements about falling in love and dreaming of the future
Foul Language:
No foul language
Violence:
No violence
Sex:
No sex scenes or sexual immorality (couple kisses on the lips)
Nudity:
No nudity
Alcohol Use:
Characters drink champagne at a party
Smoking and/or Drug Use and Abuse:
No smoking or drugs; and,
Miscellaneous Immorality:
Rudeness and a woman locks someone in a jail cell so she can win a competition.

BAKING UP LOVE is a light romantic comedy streaming on Pure Flix about a romance a pumpkin bake-off competition in a small town in Illinois. BAKING UP LOVE becomes a little farfetched and complicated, and the sound is sometimes choppy. However, it has a cute plotline, some solid acting and a strong Christian, moral worldview extolling prayer, community service, friendship, repentance, charity, and church, with a positive portrayal of a Christian pastor.

The movie begins in Chicago, with a big business meeting with Pierce Morgan, a businessman with a major attitude problem. Pierce fires anyone with a bad idea about how to make the anniversary of a town called Morton, also in Illinois, special with a competition for the annual Pumpkinfest. Pierce’s team decides on a bake-off where contestants can bake anything they choose, so long as it contains pumpkin, which is the staple of Morton. This event is extra special to Pierce because his family founded the town. The prize money is $1 million dollars too!

Cut to Morton, where Lynn Travis, a bakery owner hears there’s going to be a pumpkin bake-off. She’s perfect for the challenge, so her friends tell her, including her closest friend, Peter, who seems to have a crush on her. Later that day, Pierce comes by looking for a pumpkin pie at her bakery, which Lynn is in the process of baking for a dinner with the mayor.

That evening, Lynn is surprised to see Pierce at the dinner. Peter steps in trying to show he’s close friends with Lynn and will come to her aid. It’s clear though, that he likes her as more than a friend. After a pastor prays for the meal, Pierce tries a slice of Lynn’s pumpkin pie. He says it’s the best he’s ever tasted, but there’s one problem, everyone in Morton knows how Lynn’s pie tastes, which is problematic for the bake off. However, Pierce takes a moment to invite her to breakfast before the dinner concludes.

After Lynn and Peter leave the dinner party, Lynn’s movie star sister says she needs a favor. She needs Lynn needs to watch her niece, Julie, all summer long while she’s filming in France. Out of the kindness of her heart, Lynn agrees. The next day, Julie rallies behind her Aunt Lynn at the bakery, helping her all day.

Still, the whole bake-off contest is making some trouble for Lynn. Instead of entering the competition herself, the townspeople buy up a slew of Lynn’s pies, to try to replicate her recipe, so they can enter the contest themselves. Meanwhile, Lynn forgets to meet Pierce for a breakfast. That night, when she apologizes to Pierce, he says they’ll have to wait to see one another until the bake-off is finished since he’s a judge. However, he hints that Lynn still should enter the bake off, but in a different category.

Will Lynn be brave enough to do that? Also, will she choose Pierce or Peter (assuming, of course, that Peter decides to tell Lynn how he feels about her)?

BAKING UP LOVE has a cute plotline. The characters do a solid job of articulating how things progress, but that’s only because there’s too much to keep up with in the script. There are lots of tiers of the competition and it seems farfetched that almost everyone in town has entered. Also, there’s some choppy sound from onscreen voices where it sounds okay in one scene but distant in others.

BAKING UP LOVE has a strong moral worldview with Christian and Romantic elements. Characters stress the value of community, community service and friendship. There are light Romantic elements with falling in love and dreaming about the future. Positively, BAKING UP LOVE contains depicted prayer, a strong portrayal of a Christian pastor and one scene where a teenager repents of pride in front of a congregation. The movie also promotes donating resources to the local church. For all these reasons, MOVIEGUIDE® finds BAKING UP LOVE an inspiring movie for the whole family.