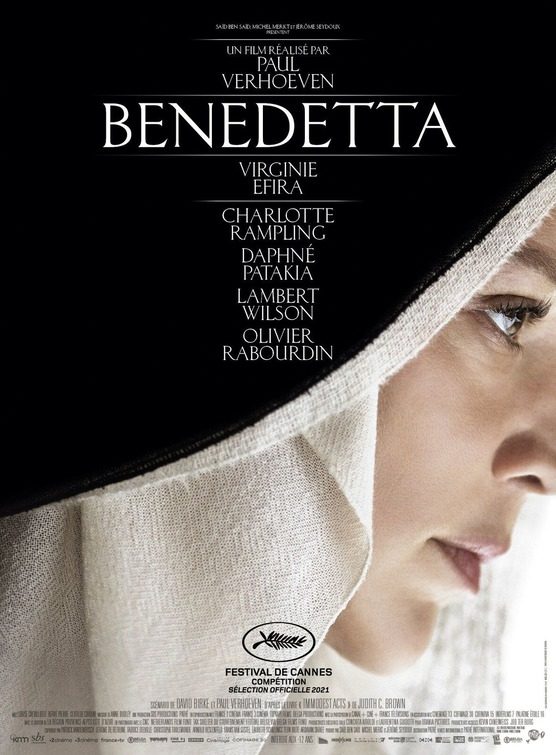 BENEDETTA is a salacious period drama from France about a young Italian nun in the 17th Century. Her parents pay a convent in Tuscany a tidy sum to groom her for the nunnery. As an adult, Benedetta has extravagant visions of Jesus. At the same time, she begins a secret torrid lesbian with another young nun. Benedetta starts manifesting wounds on her hands, feet and side, just like Jesus. When the Mother Superior wonders about the Crown of Thorns, she also gets wounds on her forehead. A church official investigates the miracle and decides it’s real. So, he replaces the elderly Mother Superior with Benedetta. However, the old Mother Superior plots her revenge.

BENEDETTA is deliberately salacious and pornographic and contains explicit, extreme lesbian sex and nudity. It’s unabashedly a blasphemous attack on Christianity, Catholicism and biblical morality. By attacking Christianity in such a blasphemous, salacious manner, it exposes a radical, politically correct nature. It advocates a pagan, feminist religiosity that embraces “sexual liberation.” BENEDETTA is truly abhorrent and particularly vile. It’s the worst movie in the last five years, or longer.

(PaPaPa, PCPCPC, AbAbAb, FeFeFe, HoHoHo, C, LL, VVV, SSS, NNN, A, MMM):
Dominant Worldview and Other Worldview Content/Elements:
Very strong pagan, politically correct, Anti-Christian, anti-biblical, feminist attack on Christianity, Catholicism and biblical morality with a pro-homosexual view of sexuality, but there are some neutral Christian elements portrayed that aren’t deliberately or overtly attacked, though they’re presented in the context of the movie’s attack on the Christian religion and biblical morality (for example, the notion of Christian charity isn’t attacked; neither is the idea of miracles)
Foul Language:
Five obscenities (including two “s” words), two Jesus profanities, five light profanities (such as MG)
Violence:
Very strong violence when a woman is burned at the stake and strong violence during an implied torture scene, when a woman receives miraculous wounds on her forehead and hands and feet and side, peasants riot, and mages of plague victims
Sex:
Extreme, pornographic lesbian sex and self-abuse multiple scenes, including a carving of the Virgin Mary is used as a sex toy
Nudity:
Multiple pornographic images of full frontal female nudity as well as upper and rear female nudity
Alcohol Use:
Brief alcohol use
Smoking and/or Drug Use and Abuse:
No smoking or drugs; and,
Miscellaneous Immorality:
Lying, nun fakes a wound to fake a miracle and that presents some question as to whether she faked five other wounds, hypocrisy, and the Catholic Church engages in the practices of torture and burning people at the stake.

BENEDETTA is a French language period drama about a young Italian nun in the 17th Century who has strange visions, starts showing crucifixion stigmata, then has a secret torrid affair with another nun. BENEDETTA is a vile, blasphemous, pornographic, abhorrent attack on Christianity, Catholicism and biblical morality.

The movie opens with a young Benedetta being committed to a convent in Tuscany. Her parents pay money to the convent for the “privilege” of having their daughter become a nun. The Mother Superior, however, makes the little girl give up her wooden doll of the Virgin Mary, and Benedetta thinks the clothes she gives her are too itchy.

Several years later, Benedetta has become a grown woman. She appears to have settled in well with life in the convent. However, she has strange visions of Jesus talking to her.

Benedetta pleads for the admittance of another young woman, a poverty-stricken girl named Bartolomea, to the convent. They become friends, and Bartolomea tells Benedetta that her father forced her to act like his wife when her mother died. Bartolomea tries to seduce Benedetta. At first, Benedetta rebuffs her, but then she decides to surrender to the other woman’s homosexual lust.

Soon, Benedetta starts manifesting wounds on her hands, feet and side, just like Jesus. The wounds, called “stigmata,” cause a sensation. The Mother Superior has doubts, however. She says it would truly be a miracle if Sister Benedetta also had wounds on her head, as Jesus did when the Roman soldiers mocked Him by putting a crown of thorns on his head.

Shortly, thereafter, Benedetta is heard screaming in a hallway. When people, go to look, wounds have appeared on her head. However, a broken pot lies on the floor, and people suspect that Benedetta used the shards from the broken pottery to make the wounds. A church official investigates the alleged miracle. He questions Bartolomea about the pottery chards, because she was in the hallway with Benedetta. Bartolomea denies the accusation, and Benedetta is vindicated. So, the church official removes the Mother Superior from her position and names Benedetta as Mother Superior. Of course, Benedetta makes Bartolomea her assistant.

Enjoying her role as Mother Superior, Benedetta becomes more and more outspoken. Also, her lesbian affair with Bartolomea becomes more torrid. Will their affair be exposed?

BENEDETTA is deliberately pornographic and salacious. As such, it also is unabashedly a blasphemous attack on Christianity, Catholicism and biblical morality. By attacking the Christian church hierarchy in such a blasphemous, salacious manner, it clearly exposes its radical, politically correct nature. Normally, such a movie would seem to be promoting a Romantic worldview, where people are corrupted by society, especially Christianity. However, the movie isn’t anti-religious per se. Thus, it seems to advocate a more pagan, feminist religiosity that embraces “sexual liberation.” Either way, however, BENEDETTA is a truly abhorrent and particularly vile. It’s certainly the worst movie in the last five years, or longer.