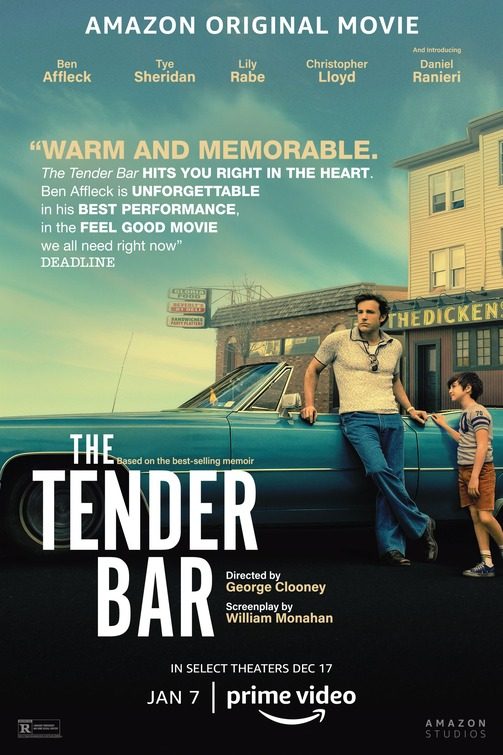 THE TENDER BAR is a well-acted drama about a 9-year-old boy abandoned by his father and living with his mother at his grandparents’ house on Long Island. His mother’s bar-owning brother, Charlie, becomes a surrogate father to J R as he grows up, graduates from Yale and sets out for New York City to be a writer. After working at the New York Times but failing to snag a permanent job, J R decides to track down his undependable father to get some closure.

Actor George Clooney does a nice job directing this rambling movie. There’s enough humor, conflict and warmth to keep things entertaining and captivating. Ben Affleck gives an appealing performance as Uncle Charlie. THE TENDER BAR contains funny, heartwarming moments, plus words of wisdom. However, it has a Romantic, non-religious worldview where the main character pursues personal dreams. Despite the college scenes, THE TENDER BAR takes place in a blue collar world with lots of strong foul language. Also, the main character has an off and on sexual affair with a beautiful rich girl. So, MOVIEGUIDE® advises extreme caution.

(RoRo, B, C, LLL, V, SS, N, A, D, M):
Dominant Worldview and Other Worldview Content/Elements:
Romantic, non-religious worldview where main character pursues personal dreams and has a father who abandoned him and who only pops into his life now and again, but his uncle takes the boy under his wing, plus there’s some solid pro-family, moral elements and practical wisdom, including support for treating women properly, and lead character strikes up a friendship with a kindly priest on a train ride, and they also meet on the train in a later scene
Foul Language:
105 obscenities (including many “f” words), 12 strong profanities, four light profanities such as OMG, and grumpy grandfather passes gas several times in one scene for comical reasons
Violence:
Boy’s no-account father beats up his kindly uncle, older man is heard hitting his girlfriend off screen, the man’s adult son finds the girlfriend on the kitchen floor and calls the police who come and arrest the man up
Sex:
Briefly depicted fornication scene between two college students in a bedroom, implied fornication and a few lewd comments
Nudity:
No explicit sexual nudity, but there are images of upper male nudity and woman’s upper back is shown during a sex scene
Alcohol Use:
Frequent alcohol use and one Saturday a man wakes up with a hangover and jokes about it
Smoking and/or Drug Use and Abuse:
Lots of tobacco smoking but no drugs; and,
Miscellaneous Immorality:
In one scene, a Catholic priest laments the declining attendance at his church.

THE TENDER BAR is a well-acted drama set in the 1970s and 80s about a boy abandoned by his father and living with his mother at his grandparents’ house on Long Island, where his mother’s bar-owning brother becomes his surrogate father as he grows up, graduates from Yale and sets out for New York City to be a writer. THE TENDER BAR has many moments of laughter and heart, plus some words of practical wisdom, but the movie’s perspective is nonreligious and contains constant foul language, other crude language and an ongoing affair with a girl the boy meets at Yale.

The movie opens with a young man, J R, traveling on a train to interview for Yale University. J R is looking back on the time when, at the age of nine, he and his mother had to move back to his grandfather’s house on Long Island when they got five months behind on their rent. His brother’s brother, Uncle Charlie, takes little J R under his wing and starts teaching him about life and how to be a man. Charlie, who owns a bar called The Dickens, after the famous English writer, tells him to get a car, never hit a woman even if she stabs you with scissors, don’t put your money in your shirt pocket, and take care of your mother. Charlie notices that J R isn’t cut out for sports, but when J R tells him he likes to read, they decide he should be a writer.

J R makes it into Yale with a full scholarship. The first day, he meets a beautiful freshman girl named Sidney. However, J R doesn’t fit in with her rich parents. So, Sidney moves on to others, even though she and J R sometimes hook up. J R still pines for her, though, and thinks that if he climbs the ladder of success as a journalist, she’ll come back to him.

After working for a time at the New York Times and failing to snag a permanent writing job there, J R decides to track down his undependable father, a radio disc jockey who moves from job to job, to get some closure.

Actor George Clooney does a nice job directing this rambling movie. There’s enough humor, conflict and warmth to keep the story entertaining and captivating. Ben Affleck gives a very appealing performance as the kindly, loquacious Uncle Charlie. He’s firmly in J R’s corner and wants him to succeed, and his attitude catches the viewer’s heart. The male patrons at Charlie’s bar are also firmly in J R’s corner, though they rib him from time to time.

THE TENDER BAR has many moments of laughter and heart, plus some words of practical wisdom. However, it has a Romantic, non-religious worldview where the main character pursues personal dreams. J R is plagued by self-doubt. So, when the Times editors decide he needs more journalistic experience at a lower level, that’s when he decides to track down his father, even though it’s clear Uncle Charlie has been an inspiring surrogate father who’s been a better replacement.

Despite the scenes set at Yale, THE TENDER BAR takes place in a blue collar, masculine world. So, there’s a lot of strong foul language, including many “f” words. Also, the main character has an off and on sexual affair with the beautiful rich girl. So, MOVIEGUIDE® advises extreme caution.