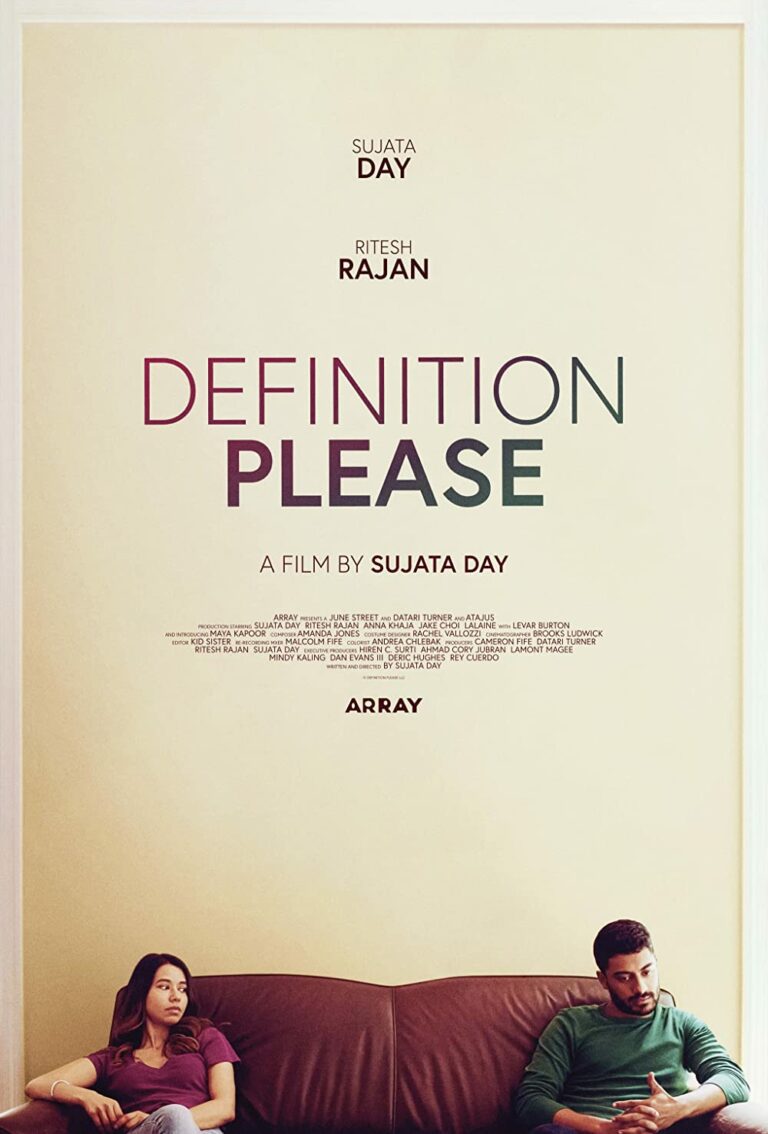 DEFINITION PLEASE is a boring dramedy on Netflix where little of interest happens. It tells the story of an Indian woman in America who was a spelling bee champion 15 years earlier and now must make some tough life choices. In her mid 20s, Monica is stuck living in her mom’s house and only finding work as a tutor when she really wants to be a chemical engineer. When it’s time for her family to memorialize her recently deceased father, her brother, Sonny, comes home. Sonny puts everyone through an emotional rollercoaster due to his bipolar disorder. How will Monica navigate this tricky family situation?

The actors in DEFINITION PLEASE are competent in their roles, but the script doesn’t have enough of interest happening to sustain the full 91-minute running time. Several scenes feel like needless padding. Overall, DEFINITION PLEASE lacks direction in its screenplay. Also, the characters are living life without any moral consequence. DEFINITION PLEASE features frequent marijuana use, lustful thoughts and promiscuous sex, as well as some brief references to worshipping Hindu gods and lots of strong foul language.

(HH, B, FR, LLL, V, SS, N, DD, M):
Dominant Worldview and Other Worldview Content/Elements:
Strong humanist worldview where people are living life without any moral consequence, with frequent marijuana use, lustful thoughts and promiscuous sex all featured, plus some light pro-family moral content, and the main characters are Hindu and are seen worshipping false Hindu gods in two scenes
Foul Language:
At least, 32 obscenities (about half or so are “f” words and include an “f” word used by a young girl in a show of disrespect to her elders that’s played for laughs), one GD profanity, one Jesus profanity, and one or more light profanities
Violence:
An enraged man tears down numerous pictures off a refrigerator and then shoves his mother to the ground, and this causes her to have a concussion, man threatens another man with a baseball bat when he catches the other man fornicating with his sister, a father is seen and heard shaking and violently threatening a young boy for breaking a household object
Sex:
Depicted sex between an unmarried couple in a car, with the clothed woman on top seen bouncing up and down, and the man shirtless, plus the woman is shown looking lustfully at two other men as well
Nudity:
A man is seen shirtless while having sexual relations in a car and is later shown lying in bed with his bare buttocks exposed, while sleeping after sex
Alcohol Use:
Some alcohol use in a bar
Smoking and/or Drug Use and Abuse:
No tobacco smoking, but a woman smokes marijuana cigarettes multiple times throughout the movie, sharing one with a friend in one scene, and teaches her mother how to smoke a marijuana cigarette in another scene; and,
Miscellaneous Immorality:
The lead character has a totally carefree attitude towards her moral choices with sex and drugs, some name-calling and bullying but rebuked, and a woman pretends to be gravely ill in the hopes of making her children grow closer in their troubled relationship.

DEFINITION PLEASE is a boring dramedy on Netflix where little of interest happens in the story of an Indian woman in America who was a spelling bee champion 15 years earlier and now must make some tough life choices while dealing with her ill mother and with her bipolar brother’s chaotic visit. The people in DEFINITION PLEASE are living life without any moral consequence, with frequent marijuana use, lustful thoughts, and promiscuous sex all featured, as well as some brief references to worshipping Hindu gods and lots of strong foul language.

Monica, played by the movie’s Writer/Director Sujata Day, is an Indian-American woman stuck living in her mother’s house while in her mid-twenties. Her only work consists of tutoring young students, particularly a young girl who’s being forced by her mother to train for spelling bees against her will.

Monica’s father recently passed away, and as she and the rest of their relatives prepare a memorial service for him, they are confronted with a rare visit home by her brother Sonny (Ritesh Rajan). Sonny has bipolar disorder and works as a personal trainer, believing that he is a disappointment to his parents even though Monica is also wasting the potential she has to be a chemical engineer.

Monica spends her days outside of tutoring smoking marijuana, creating paintings and hanging out with her best friend, who encourages her to start making forward progress with her life. She also begins a casual sexual relationship with a young Asian man, upsetting Sonny, who keeps interfering in their dates.

As the week passes, Sonny becomes ever more unpredictable with his temper, putting their mother at risk. Will Monica manage to keep him under control? Will she ever get her life in gear?

It’s clear that DEFINITION PLEASE is a passion project for Sujata Day, as she writes, directs and produces as well as stars. However, her competent acting as Monica and the sometimes fiery performance of Ritesh Rajan as her brother, Sonny, are the movie’s only real high points, as the movie dawdles through much of its storyline.

Several scenes feel like needless padding, particularly a variety show Monica and Sonny produce in the hopes of cheering up their mother when they wrongly believe she is gravely ill. Monica also seems to be lacking in any sense of moral values. For example, she engages in casual sex in a car with one man while staring lustfully at other men at two other points in the movie, not to mention her marijuana habit and the fact that she even teaches her own mother how to smoke it. Sadly, the movie also has lots of strong foul language. All this makes DEFINITION PLEASE suitable only for adults. Whether DEFINITION PLEASE can find an audience on Netflix for such a plodding plot with containing such immoral behavior is another question entirely.