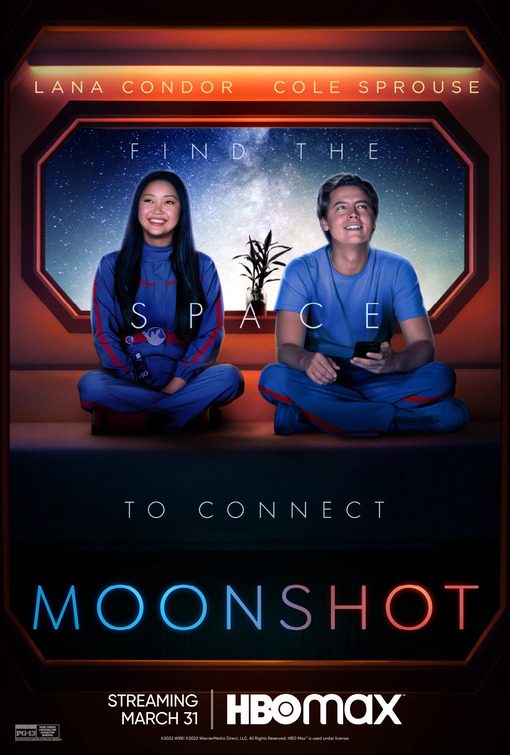 Streaming on HBO Max, MOONSHOT is a romantic comedy, with a science fiction setting, about two polar opposite college students. Walt and Sophie are traveling to Mars to be with their significant others. Sophie pays the hefty million dollar fee. Walt doesn’t have the money. Also, he’s applied and been rejected 37 times by the Mars scholarship program. Walt latches onto Sophie, but she has nothing but disdain for a guy she repeatedly calls too stupid to have a right to go to Mars. Walt takes advantage of Sophie’s brief soft spot to help him get to the spaceship take-off site. He then becomes her stowaway. Sophie begins to see winning qualities in this otherwise average ne’er do well. However, is it enough to steer Sophie away from her perfectly planned, but not affirming, life?

MOONSHOT has many laughs. Bright and uplifting, it promotes friendship, loyalty, the importance of love, and the gift of life. However, it has about 20 obscenities and profanities, sexual references, crude humor, drunken behavior, and a politically correct sublot promoting same-sex marriage. So, MOVIEGUIDE® advises extreme caution for MOONSHOT.

(C, BB, PCPC, HoHo, H, LL, S, N, AA, M):
Dominant Worldview and Other Worldview Content/Elements:
Light Christian, biblical, moral, redemptive worldview with true love and gratitude as the ultimate goal, with a promotion of the gift of life, loyalty and heling others, but the storyline contains politically correct material promoting homosexual marriage, and Creation is only explained by the Big Bang Theory with no reference to God or ex nihilo creation
Foul Language:
About 11 obscenities (including one “f” word, about five “s” words, two “a” words, two “b” words, and an obscene reference using a word for male anatomy), one GD profanity and four light profanities
Violence:
No violence
Sex:
Jokes about erections, the subject of sending nudes is verbally expressed in dialogue, brief implied phone/video sex, and pornography mentioned in dialogue, but not graphic
Nudity:
Upper male nudity when main characters in their underclothes after changing, but bodies are fully covered
Alcohol Use:
Two scenes where a character is drunk, three scenes where there is alcohol consumption
Smoking and/or Drug Use and Abuse:
No smoking or drugs; and,
Miscellaneous Immorality:
Mean behavior in repeatedly calling main character stupid.

Streaming on HBO Max, MOONSHOT is a fun, futuristic comedy adventure of two polar-opposite college students who hop on a spaceship to Mars last minute in order to be with their true loves. One traveler is a stowaway, which puts them both in danger. There are plenty of laughs, intertwined with deep messages about the importance of using our time well. True love and the importance of loved ones are central themes. The movie promotes Christian values such as helping others in need, the uniqueness of every individual, friendship, and gratitude for Creation. However, the movies has some crude and sexual humor, drunkenness, and a fair amount of foul language, including one “f” word. There is a subplot involving a homosexual couple who decide to get engaged, which feels more like politically correct leftist propaganda than story.

Walt and Sophie, two college students, share an interest to travel to Mars. Walt is an average student with an obsession to go to Mars. He has no family to speak of. Also, it’s difficult for him to make friends because he’s socially awkward and only wants to talk about other planets. In addition, Walt is a graduating senior with no future plans and has applied 37 times for a place on the ship to Mars; and, he’s been rejected 37 times.

At a party, Walt literally runs into Sophie while she’s on a “Virtual Call” with her family and boyfriend, who live in Mars. Sophie is very angry at Walt’s intrusion. She chases him out of the room so fast that he steps on her connection device, which angers her further.

Walt is an assistant barista to his only friend, a robot named Gary. Walt runs into Sophie again when she sulks in complete misery in the cafe where he works. Sophie is heartbroken because her boyfriend and brilliant scientist, Calvin, has decided to stay on Mars for another year. Walt tries to comfort her, but she has nothing but disdain for him. He’s eager to share his love for Mars with Sophie and encourages her to make the trip. Sophie reveals that she has a fear of flying. However, she overcomes the fear and pays the one million dollar cost for those who aren’t accepted into a Mars scholarship program. Walt, not having that kind of money, finds a way to tag along with her as a stowaway. Sophie isn’t aware of his plan, until they’re well on their way to Mars.

Sophie is afraid of being mistaken as an accomplice to Walt’s security breach. So, she helps him hide in her cabin. Her perfectly planned out life is turned upside down by this zany, awkward dreamer with an average intelligence. His average existence makes him more appreciative of the wonder around him.

Can Sophie look deeper and see in him someone who deeply appreciates Mars, and her? Or, will she stick to the plan, and subsequently take second place to her intellectually gifted boyfriend’s dreams and desires?

MOONSHOT has some great moments. As Walt, Cole Spouse gives a believable and entertaining performance of a lovable but awkward “everyman.” The movie does a nice job presenting a future which relates to the present. There are some visually stunning images of outer space. The movie promotes Christian values such as helping others in need, the uniqueness of every individual, gratitude for life, loyalty, friendship, and the importance of people using their time well. Also, true love and the importance of loved ones is a central theme. Young Earth and Old Earth Creationists, however, may take offense at one scene where Creation is explained as a result of the Big Bang Theory without a reference to God or ex nihilo creation. Of course, logically, the Big Bank Theory, or any theory of how our universe was created out of nothing (a fact that can no longer be rationally denied), inherently requires the existence of a Personal, Eternal, Transcendent, All-Powerful, Perfectly Benevolent and Just, Omniscient, and Rational Mind or God, the kind of God who’s perfectly explained in the text of the Holy Bible. MOONSHOT also has about 20 obscenities and profanities, some sexual references, crude humor, drunken behavior, and a politically correct sublot promoting same-sex marriage.

Audience: Teenagers and adults and Teens