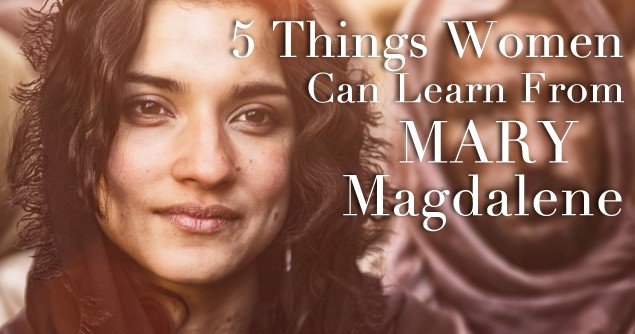 With many new movies portraying the life of Jesus on the big screen, including RISEN, which is released February 19th and THE YOUNG MESSIAH on March 11th, some viewers may overlook the impact and role that women have in the great commission that Jesus gave. One of the most prominent women around Christ’s ministry here on earth is Mary Magdalene, who has a poignant scene in RISEN. Here are 5 things women can learn from this important biblical figure.

1. God loves to use women to spread the Gospel.

Mary Magdalene is one of the many Marys mentioned in the Bible. Most of the time, she is mentioned as being with Jesus or with those following Jesus. Mary was very devoted to serving the Lord. She was so deeply passionate about following Jesus that numerous unsupported and heretical rumors have appeared speculating that she was in a conjugal relationship with Jesus. The most important thing that Mary Magdalene shows us in scripture is that the Lord loves to use women to spread the Gospel. Mary was the very first person that Jesus appeared to after He was resurrected. She was the first person to receive the Great Commission to go tell the world that she had seen Jesus. “If the resurrected Savior used women to proclaim to the male disciples that He was alive, we should also make full room for women in the proclamation of the eternal Gospel.” (Rodriguez, Angel – Biblical Research Institute)

The first time that Mary Magdalene is mentioned in the Bible she is listed among women whom Jesus had rescued from demons. Mary is listed as the first of these women and scripture says that she had been afflicted with “seven demons”. Most Bible scholars believe that because Mary is listed first and is the only women to have a specific number of demons listed, Mary was the most tortured of these women. When Jesus saw her, He recognized her tormented mind and immediately banished the spirits that possessed her. He restored her peace of mind and allowed her to follow Him. No matter what we are going through or what plagues our minds, we can always look to this story in Luke 8 and know that Jesus has the power to give our minds supernatural peace.

3. Be persistent in your walk with Jesus.

Throughout Mary’s walk with Jesus, she had to face many obstacles. Mary was with Jesus and the disciples while Jesus was being persecuted. She is also listed among the women standing close to him during the crucifixion. “There were also some women looking on from a distance, among whom were Mary Magdalene, and Mary the mother of James.” (Mark 15:40) While many of the disciples of Jesus, like Peter, were quick to leave Jesus during a time when following him was dangerous, Mary stayed and followed Christ no matter the cost to herself.

4. Serving God is never in vain.

Even after Jesus was crucified, Mary did not give up her position of service to God. Like others, Mary Magdalene was discouraged and sad, but she still believed that Jesus was the Messiah. Mary was the first to see Jesus alive because she continued to serve God. “But at daybreak on the first day of the week [the women] took the spices they had prepared and went to the tomb. They found the stone rolled away from the tomb, but when they entered, they did not find the body of the Lord Jesus.” (Luke 24:1-3) Mary could have stayed home and mourned or even waited till later in the day to bring the spices to the tomb, but Mary had a servant’s heart. She rose early in the morning to serve Christ and to honor him in the best way that she knew how.

5. Don’t be afraid of what other may think; simply follow Jesus.

When Mary saw the angels after the Resurrection she was ecstatic. She and the women with her never questioned the words of the angel. He reminded her of Christ’s words previous to his crucifixion. “‘Remember what he said to you while he was still in Galilee, that the Son of Man must be handed over to sinners and be crucified, and rise on the third day.’ And they remembered his words.” (Luke 24:6-8) Mary never questioned the words of Jesus. She went immediately to tell the other disciples of what she had seen and what she had heard. Never once did Mary question what people would think about her while she was following Jesus or spreading the news about His Resurrection.

The Bible does not mention much before Mary’s life of following Jesus, but through the small glimpse given into the life of this devoted disciple, we are able to learn so much. Mary proves that sacrificing everything to follow Jesus brings along a reward that is greater than we can ever imagine, a life with Jesus himself. The next time you see Marg Magdalene portrayed on a movie or in a television show like RISEN or A.D. THE BIBLE CONTINUES, remember the truth of Scripture and the things we can apply to our own lives for His glory.