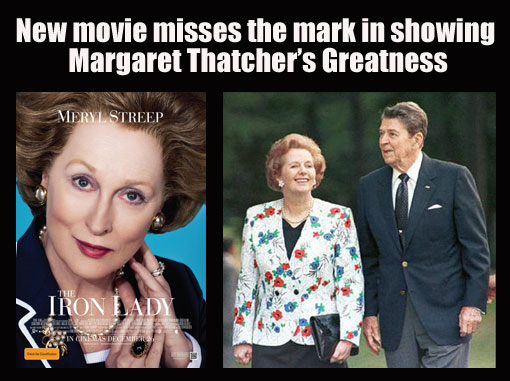 Thousands of studies have shown that the media, including movies and television programs, can shape the thoughts and behavior of people. Politicians, advertisers, and educators depend on this being true.

People’s view of history also can be shaped by movies and television programs. For instance, in 1915, the popularity of D. W. Griffith’s BIRTH OF A NATION led to an increase in the Ku Klux Klan’s membership, and, in the 1930s, Adolph Hitler’s propaganda minister, Goebbels, took command of the German movie industry to solidify Hitler’s power across Germany.

The bad news? THE IRON LADY fails to capture the regal strength, wit, faith, and intelligence of Margaret Thatcher, even in her aging years. Half of the movie is a stagey presentation of an aging Thatcher reminiscing about her life while she interacts with a hallucination of her late husband, Denis. The movie also spends too much time concentrating on the outcry and street protests among the radical left against some of her policies.

The movie starts off by showing Margaret Thatcher in the twilight of her years. Her daughter and staff have given her the task of throwing out her late husband’s things. Facing this sad prospect, Mrs. Thatcher procrastinates and envisions herself talking with her beloved husband, Denis. As they converse, Mrs. Thatcher recalls her political career, beginning with her memories of her conservative, politically oriented father. As the timeline goes back and forth, Mrs. Thatcher recalls the beginning of her political career in the House of Commons, her marriage to Denis, her takeover of the Tory Party, her election as Prime Minister, her tussle with Argentina over the Falkland Islands, her renovation of Britain’s economy, and, finally, her resignation.

Supporters and opponents of Margaret Thatcher can agree on at least one point. She was, without a doubt, one of the most influential and results-driven political leaders of the 20th Century. She was the first woman to lead a major political party in the United Kingdom and, after leading her party to victory in the 1979 general election, became the U.K.’s first and only female Prime Minister. Thatcher was re-elected to an unprecedented three terms and voluntarily resigned in 1990 after Michael Heseltine’s challenge to her leadership of the Conservative Party. In over three decades as prime minister, she successfully reversed a precipitous national decline and, as the movie eloquently states, “left the country in a better state than [she] had found it.” In recognition to her service to her country, she holds a life peerage as Baroness Thatcher (only mildly referenced in the movie when she is once addressed as “Lady” Thatcher), and is entitled to sit in the House of Lords.

One thing and one thing alone stands out in the 2011 movie which fictionalizes the life of Lady Thatcher: Meryl Streep’s enchanting, masterful performance. In fact, at times, viewers will have to pinch themselves in order to remember that they are watching a work of fiction. Even so, Meryl fails to capture the regal dignity of Thatcher, and therein lies one of the movie’s major problems.

Fiction is, precisely, the greatest failing of the movie, marketed as a biopic about the former “Iron Lady.” The movie doesn’t completely bash Thatcher and her politics. In fact, it features several scenes in which Meryl Streep successfully defends her conservative, capitalist, and democratic ideals of limited government and free markets.

Despite this, the movie deceptively downplays the former prime minister’s successes by drawing the viewer’s attention to the weakness and sickness that allegedly dominate her later life. However, Thatcher leads an extremely private life in London, and such allegations are purely speculative.

At the end of the day, audiences are misled (intentionally or not) by director Phyllida Lloyd, a distinguished professor of Theatre at Oxford who was also named one of the 101 most influential gay and lesbian people in Britain by the Independent. Lloyd re-envisions Thatcher’s political successes in light of her later frailty. “I will not die washing a teacup,” the young Margaret Roberts proclaims when Denis proposes to her; and yet, at the end of the movie, that is precisely what she does. The movie’s iconography, though perhaps subtle, is dangerous because it leads viewers to believe, at the end of the day, that Mrs. Thatcher’s life, no matter how grand and how accomplished, is reduced to that very moment, when finding herself alone after saying goodbye to her dead husband, she cleans up a teacup. Although one might argue that this constitutes a portrayal of the eventual state of all human beings reaching a certain elderly age, it’s a dangerous, misleading view of Thatcher and her impact on history. One cannot help but wonder how much stronger Streep’s portrayal could have been if the movie had closed on the extraordinarily powerful eulogy Thatcher delivered via video for President Ronald Reagan’s funeral in 2008. Overall, therefore, Mrs. Thatcher ultimately comes off as weak, befuddled, and sometimes strident, not regal, tough, smart, and faith-filled. Only a few scenes point to her underlying personal strength.

A watery script further weakens THE IRON LADY. The script skims the surface and jumps from postcard to postcard images and recollections of Margaret Thatcher’s life, interspersed with scenes from her now allegedly precarious mental state. These scenes of an elderly Thatcher take up too much time. They could have been made better if Thatcher didn’t look so befuddled so much of the time and if the movie made the scenes seem more like just imaginary conversations with a dead loved one rather than hallucinations. For contrast, see the dignified, touching scenes in SHE WORE A YELLOW RIBBON where a middle-aged John Wayne talks to his clearly beloved dead wife at her grave.

Another failing of the movie is its focus on Thatcher as a grocer’s daughter. Although Lloyd does include two references to Thatcher attending Oxford university (one of the most prestigious institutions of higher learning in the world), it fails to note she was a successful chemist and lawyer. When she first took office in Parliament, it was based on those talents and abilities, and her clear conservative philosophy, not on her popularity as a commoner’s daughter.

Perhaps the most bizarre aspect of the movie is the director’s choice not to emphasize Thatcher’s relationship with Ronald Reagan and Pope John II. Together with Mrs. Thatcher, these Western leaders helped defeat the Communists in Russia and Eastern Europe in the 1980s while forcing the Russians to tear down the Berlin Wall. Only about 30 seconds in the movie makes note of this remarkable and enduring achievement.

In contrast to this, the movie spends a lot of time focusing on some of the riots and political unrest that greeted her election as Prime Minister and led to her resignation. Very little of the movie focuses on how her conservative policies led to a huge reinvigoration of the British economy.

As a result of all of these problems, one cannot help but wonder, What is the agenda of the filmmakers? Apparently, Meryl Streep’s agenda was to offer the most heart-wrenching, memorable performance she could, and for this, she should be commended. However, it seems that the filmmakers didn’t achieve such a noble end. Without Streep’s performance, in fact, Thatcher would lose any resemblance to the regal, strong, and wise woman who helped change the course of Great Britain and the world. As Norman Tebbit points out in a recent interview with the Telegraphy (http://www.telegraph.co.uk/news/politics/margaret-thatcher/8892130/Norman-Tebbit-This-is-not-the-Margaret-Thatcher-I-knew.html), that is how we ought to remember her – instead of as the elderly, weakened, slightly befuddled retiree the scriptwriter and the director decided to bring to the forefront.