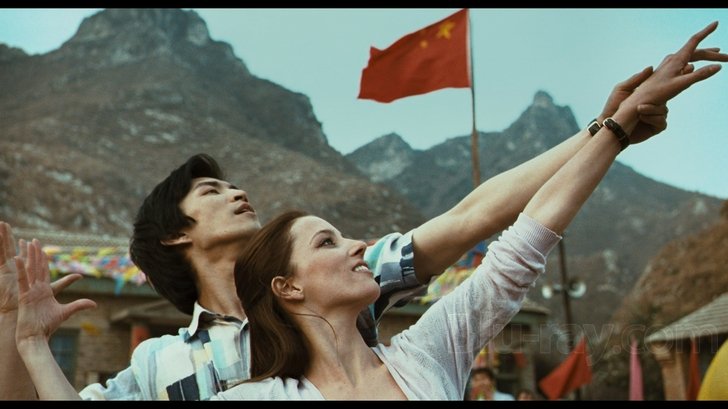 REPENTANCE (subtitled):  Quality:  * * * * Acceptability:  +2 – Soviet Union − 1987:  REPENTANCE is the one movie credited with helping to overthrow Communism. This magnificent movie exposes the evils of communism, statism and totalitarianism while lifting up the suffering and the triumphant, eternal Church of Christ Jesus.

ELENI (some subtitles):  Quality:  * * * * Acceptability:  +2 − 1986:  ELENI is the greatest movie about a mother’s love in the face of adversity. It is the true story of a mother who was murdered by the communists during the Greek Civil War. Eleni proclaims, “Christ is risen” on Easter, prays to God and concludes before her execution with the touching statement that “It is such a joy to be a mother that I thank God for letting me know it.”

STRIKE (subtitles):  Quality:  * * * * Acceptability:  -1 – 2007:  STRIKE, a German/Polish production, is one of the most compelling, captivating, pro individual, pro faith, Anti-Communist movies ever made. It tells the story of how the Communist persecution of one hard-working woman eventually led to the downfall of Communism in Poland. MOVIEGUIDE® highly commends STRIKE for anyone age 13 and up.

THE LOST CITY:  Quality:  * * * * Acceptability:  -1 – 2005:  This excellent movie follows the heartbreaking tale of one family, three brothers and a beautiful woman against the backdrop of the overthrow of Cuban dictator Batista in 1958 and 1959, and the establishment of Fidel Castro’s brutal, oppressive Communist dictatorship. THE LOST CITY is a magnificent historical drama that tells the truth about Castro’s ruthless, Communist regime and that powerfully celebrates family, liberty, democracy, Christian faith, national heritage, and other positive virtues.

THE LIVES OF OTHERS (subtitled):  Quality:  * * * * Acceptability:  -2 – 2007:  THE LIVES OF OTHERS is a German movie about a secret policeman in Communist East Germany in the 1980s who secretly tries to help a playwright and his live-in actress girlfriend who are being investigated. THE LIVES OF OTHERS is an excellent movie that shows how evil Communism and socialism are, but it contains some strong sexual content and explicit nudity requiring extreme caution.

HANOI HILTON:  Quality:  * * * Acceptability:  -2 – 1987:  HANOI HILTON is the story of the American Prisoners of War (POWs) captured and tortured by the Communist Vietcong from the 1960s through the mid-1970s. Brilliantly acted, with a highly polished script, HANOI HILTON is a moving, insightful film that will be too strong for some viewers because of its realism since it does realistically portray the war and so there is some male nudity.

THE MANCHURIAN CANDIDATE:  Quality:  * * * * Acceptability:  +1 – 1962:  John Frankenheimer’s Cold War thriller about a Korean War prisoner of war who is brainwashed into becoming a coldly efficient assassin by his Communist captors and his power-hungry Communist mother. THE MANCHURIAN CANDIDATE clearly shows that Communist is really just another brand of power-mad fascism.

METROPOLIS (silent):  Quality:  * * * * Acceptability:  +3 – Germany − 1929:  This classic science fiction movie is full of biblical symbolism and allegory. The city represents heaven and earth, as well as the caste distinctions to be found in a mercantilist/socialist state. Maria preaches reconciliation and new life through the intervention of a mediator between the rulers and the people. Rotwang, the priest/scientist, is the Adversary who wants to make the world over in his image. Freder becomes the Christ-like mediator, ready to sacrifice himself to save others. This movie rebukes the mercantilism which was rearing its ugly head as National Socialism in Germany. The film sternly condemns the revolutionary leader, the robot Maria, a counterfeit savior in the tradition of Barabbas, Hitler and Lenin, who leads the people to death and destruction. At the same time, it lifts up the Mediator, who comes to bring peace. METROPOLIS is as popular today as when it was made. A more complete version of METROPOLIS has just come out, and moviegoers will get a chance this spring and summer to see this classic movie at local theaters in the United States and around the world.

A TALE OF TWO CITIES:  Quality:  * * * * Acceptability:  +4 – 1935:  In a movie starring Ronald Colman in the role of a lifetime, as the cynical lawyer Sydney Carton who makes a great sacrifice, the causes and effects of the liberal, socialistic, Anti-Christian French Revolution come alive through this richly textured rendering of the classic novel by Charles Dickens, published in 1859. The movie closes with Jesus Christ’s words:  “I am the Resurrection and the Life; he who believes in Me shall live even if he dies.” (John 11:  25)

BITTER HARVEST:  Quality:  * * * * Acceptability:  -1 – 2017:  BITTER HARVEST is a must-see, powerful historical drama about the horrible devastation of Ukraine by the Soviet communist atheists in 1932-33. Joseph Stalin, the communist leader, decides Russia needs to confiscate all the food in the Ukraine and enforce socialist collectivization against the farmers in Ukraine. Stalin literally closes the Ukrainian borders and treats the whole country as one huge concentration camp. Yuri, a young man in a small farming village, and the woman he wants to marry try to survive this horrible oppression and escape to Canada. BITTER HARVEST is very well-plotted, with terrific acting. It exposes all the imaginable evils of collectivism, socialism and communism in the Soviet Union and other places. The love story and other aspects of the movie just highlight the cruelty of Stalin’s communist, socialist dictatorship. BITTER HARVEST contains lots of war violence and cruelty, but it’s never over the top. Because of their circumstances, the couple consummates their marriage before the ceremony. That said, BITTER HARVEST is a Christian movie throughout, featuring lots of comments about God and Jesus, churches, communion, and people being martyred for their faith.

CAPTAIN AMERICA:  CIVIL WAR:  Quality:  * * * * Acceptability:  -2 – 2016:  CAPTAIN AMERICA:  CIVIL WAR is the third Captain America movie. Steve Rogers, aka Captain America, resists Iron Man creator Tony Stark and the U.S. government because they want to place the Avengers team under the United Nations. When Steve’s childhood friend Bucky is framed for a terrorist attack, Steve must become an outlaw to protect his friend and fight for liberty. The Avengers are split between law versus liberty. This leads to an epic fight that has both sides wondering why they’re fighting. CAPTAIN AMERICA:  CIVIL WAR is superbly crafted and enthralling, with many funny moments to lighten the mood. Captain America is by far Marvel’s most morally centered character. The ethical conundrum the filmmakers have crafted put Captain America’s convictions to the ultimate test. Thankfully, the ending makes a strong statement against vengeance. It also promotes freedom, taking responsibility, and fighting against injustice and socialism. Sadly, CAPTAIN AMERICA:  CIVIL WAR continues the growing trend of excessive foul language in Marvel movies. Also, the intensity of the violence is too much for children, so MOVIEGUIDE® advises strong caution for CIVIL WAR.

RED DAWN:  Quality:  * * * * Acceptability:  -1 – 1984:  From the safe, familiar environment of a classroom, we watch countless parachutes drop from the sky and into the heart of America. Oh, no:  invading Commies! Laugh if you want – many do – but Red Dawn has survived countless more acclaimed films because Father Time has always been our most reliable film critic. The essence of timelessness is more than beauty. It’s also truth, and the truth that America is a place and an idea worth fighting and dying for will not be denied, not under a pile of left-wing critiques or even Red Dawn’s own melodramatic flaws. Released at the midpoint of Reagan’s presidential showdown with the Soviet Union, this story of what was at stake in the Cold War endures.

MAO’S LAST DANCER:  Quality:  * * * * Acceptability:  +1 – 2010:  MAO’S LAST DANCER is a marvelous new movie about a Chinese ballet dancer who finds freedom, success and love in the United States after coming to Houston Texas as part of a cultural exchange program. Based on the dancer’s autobiography, MAO’S LAST DANCER is a powerful, dramatic, inspiring, beautiful story for older viewers. Best of all, it exposes the evils of communism and extols American values of freedom.

MEET JOHN DOE:  Quality:  * * * * Acceptability:  +3 – 1941:  Starring Gary Cooper (in one of his best performances) as a good-hearted hobo and Barbara Stanwyck (in perhaps her best performance) as a hard-bitten news reporter who still has some idealism left, MEET JOHN DOE is a vastly underrated masterpiece that shows the problems that can happen if Christians let their various movements be stolen by corrupt politicians on the make. The movie has a Pro-American, Christian populist message that makes a strong case against National Socialism and other forms of big government tyranny, including atheistic, immoral left-wing socialism and Communism.

TOY STORY 3:  Quality:  * * * * Acceptability:  +3 – 2010:  In TOY STORY 3, the toys we’ve come to love are held captive by a tyrant in a daycare center full of rambunctious young children who literally start tearing them apart. TOY STORY 3 is another impressive, delightful, hilarious, heartwarming, and redemptive animated classic from Pixar and Disney. The heroes stand up against the Communist, statist “Animal Farm” tyranny, with Barbie exclaiming, “Government is from the consent of the governed!”

THE WAY BACK:  Quality:  * * * * Acceptability:  -1 – 2010:  THE WAY BACK tells the epic story of how seven men during World War II dared to escape from a Communist prison camp run by the brutal Soviet dictatorship and started walking 4,000 miles to freedom. Despite some rough content and images of violence and death that call for caution, THE WAY BACK is a powerful, soul-stirring, penetrating, sweeping, visceral, inspiring, astonishing, unforgettable, and shimmering masterpiece with a very strong Christian, Anti-Communist worldview.