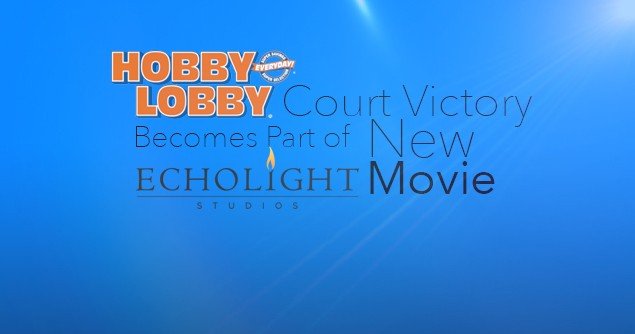 A new, documentary movie from EchoLight Studios, exploring the “erosion” of religious freedom in America, will highlight Hobby Lobby’s recent Supreme Court victory about the right of an employer, based on religious beliefs, to refuse to fund birth control or certain contraceptives that may end the life of an unborn baby.

Creating ministry opportunities while bypassing movie theaters in its initial showing, this faith-based movie is set to hit big screens in churches across the country on September 1.

Entitled ONE GENERATION AWAY:  THE EROSION OF RELIGIOUS LIBERTY, the upcoming documentary is a sobering look into rising threats to religious freedom for Americans. A well-known quote from the late President Ronald Reagan punctuates the trailer released online:  “Freedom is never more than one generation away from extinction.”

The inclusion of Hobby Lobby in the movie is extremely timely. In late June, the Supreme Court ruled in favor of Hobby Lobby to exercise a faith-based exemption from a government-led birth control mandate. However, the decision was a tight five-to-four vote and sparked vitriolic responses across social media against the decision.  An increasing number of liberal-minded, public opinion-shaping commentators have insinuated since the ruling that this pro-religious freedom decision doesn’t reflect today’s America. To a degree, they may have a point.

In addition to the high-profile Hobby Lobby case, the movie will also highlight other precedent-setting court cases, including one involving Texas cheerleaders and banners with Bible verses; cases involving the U.S. military; and, cases of businesses challenging legal decisions ordering them to provide services for same-sex weddings.

Among the dozens of people who reportedly appear in the movie are Steve and David Green of Hobby Lobby; former Arkansas governor Mike Huckabee; Tony Perkins of the Family Research Council; Jennifer Marshall of Heritage Foundation; Robert Jeffress of First Baptist Church in Dallas; and, Tim Wildmon of the American Family Association.

Also appearing in the movie as a counterpoint to the Christian worldview is atheist activist Dan Barker, who provocatively says in the trailer “Millions of good Americans believe birth control and abortion are a blessing. . . good thing for this country.”  (The best comedy writers in Hollywood couldn’t come up with a more ironic use of the word “blessing” in this context.)

Showing the movie in churches – instead of theaters – is part of EchoLight’s strategy to create movies that have ministry value, which churches can use in outreach efforts in their local communities to draw more people to see church in a new light.  The movie studio intends to promote dialogue about relevant, pressing issues as well as provide high-quality, family content.

Not only do an increasing number of churches have theater-like set-ups, big screens and HD-quality cameras, but churches also offer an attractive, built-in audience of believers for EchoLight’s movie-showing. (It gives a new meaning to the old line “Get me to the church on time” from the classic MY FAIR LADY. Now it could be because a movie is about to start in the sanctuary.)

Movieguide plans to post a full review of ONE GENERATION AWAY:  THE EROSION OF RELIGIOUS LIBERTY later this summer. Stay tuned!

To support Movieguide and their mission to change media,  click here to donate.