Our Enemy the Media 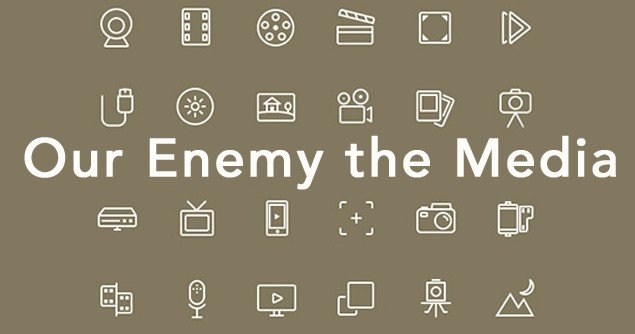 In 1995, social scientists Stanley Rothman and Amy Black did a survey of the most influential editors and reporters in America, designated “The Media Elite.” Their work was replicated in later studies. Among the findings:

• 77% identified as Democrats, versus 5% who considered themselves Republicans.

• A staggering 97% believed in a right to abortion, a belief strongly held by 86%. By comparison, according to a 2014 Gallup Poll, the American people are just about evenly divided on the issue – 47% pro-abortion to 46% pro-life.

• As long as 20 years ago, 73% of the media elite believed homosexuality is an acceptable lifestyle.

These aren’t just personal opinions. They shape the way news is managed and manipulated every day in a thousand ways.

The media have spent years unabashedly crusading for homosexual marriage – giving a megaphone to one side and gagging the other. And now they find, miraculously, that public opinion has shifted here.

While the media tilt decidedly left on economic issues and defense/foreign policy, on social issues, they’re off the charts.

Pew Research did a study of 500 news stories on same-sex “marriage,” published between March 18 and May 12 of this year, and found that stories supporting the fraud outnumbered those in opposition by a 5-to-1 margin. Viewed another way, the study showed that of these stories, 47% focused on support for marriage deconstruction, 44% were considered neutral, and 9% emphasized opposition.

Pew adds: “The news media focus on support (for mock marriage) held true whether the stories were reported news articles or opinion pieces, and was also the case across nearly all media sectors studied. All three of the major cable networks, for instance, had more stories with significantly more supportive statements than opposing, including FOX News.”

Reflecting its entrenched bias, the week of the Supreme Court decision, headlines in The New York Times were euphoric (discarding even the fig leaf of objectivity), including: “Jubilant Marchers at Gay Pride Parades Celebrate Supreme Court Ruling” (who would have thought?), “With Same-Sex Decision, Evangelical Churches Address New Reality” – subhead: “The dramatic shift in public opinion (which the media worked assiduously to create), and now the nation’s laws, on same-sex marriage has left evangelical Protestants in an uncomfortable position” (i.e. get with the program you Christian troglodytes, or else) and “Next Fight for Gay Rights: Bias in Jobs and Housing.” And after that will come transgender rights (including unisex bathrooms), abolition of age of consent laws, group marriage, banning discriminatory terminology (there’s a bill in the California Legislature to eliminate “husband” and “wife” on state documents) and “sex-change” surgery for 15-year-olds – all of which the media will enthusiastically embrace in the name of a spurious equality.

With steadily declining circulation (who wants to pay to be lectured by smug leftwing nannies?), The New York Times influences public opinion indirectly. The Grey Lady isn’t read by Middle America. Plumbers and waitresses don’t rush out to buy it every day. Its influence is felt among politicians of both parties and business elites.

Most importantly, it provides direction to the rest of the media, telling them which stories are worthy of their attention and how to cover them. It also tells them which details are relevant and which can conveniently be ignored. In the wake of the SCOTUS decision, did any mainstream media outlet even allude to the fact that the Supreme Court nullified tens of millions of votes – that 31 states adopted constitutional amendments defining marriage as the union of a man and a woman, most by landslide majorities?

The media wrecking ball was in full swing in a July 5 story in The Houston Chronicle, headlined, “In resistance to same-sex marriage, echoes of 1967. Religious objections? Segregationists had those too.”

Here is a smear with ominous portents. By comparing advocates of marriage as understood for the past three thousand years to die-hard segregationists opposed to what was called miscegenation, the media is turning a perfectly respectable intellectual position into bigotry. (By the way, the Bible says that God created them man and woman, not black and white.)

It also reveals the next targets of the Sexual Revolution: churches which refuse to buckle under. They’ll be scrutinized, ostracized, hauled before human rights commissions and have their tax-exempt status threatened. After all, why should taxpayers subsidize hatred?

Regardless of the issue, the ideology is the same. If you want to know what they’re thinking over at The New York Times, The Washington Post, ABC News, et al., check out the Human Rights Campaign, the ACLU and the Southern Poverty Law Center.

Americans are increasingly skeptical of the media. In a poll released a few days ago, only 24% said they believe journalists “try to be objective.” In another survey, journalists ranked lower on trust than every professional group save corporate executives and lawyers. And yet – repeated often enough – their lies are believed.

The mainstream media have never been more powerful. Not only do they control every major outlet from print to broadcast, they even dominate Internet news sites and the blogosphere. There is nothing on the right that comes close to competing with the Huffington Post, MoveOn.org and Mother Jones, which also influence the old media.

Talk-TV is also monopolized by the left. After calling Americans cowards on 9-11, Bill Maher got dumped by ABC but almost immediately picked up by HBO (anti-Americanism must be rewarded). Al Sharpton, host of an MSNBC talk show, stoked the fires of rage that led to the death of a rabbinical student during the Crown Heights riots and the deaths of seven employees of Freddie’s Fashion Mart.

Last week, on his Daily Show, Jon Stewart asked a Democratic Senator if Republicans “have mental problems,” while over at Hardball, Chris Matthews (he of the tingly leg) was telling us that Hillary Clinton is “more of a conservative.” She could almost be mistaken for Ronald Reagan.

The news media is the most powerful force working for the destruction of America – more than Hollywood, the public education establishment, academia, organized labor and leftist interest groups. It is ubiquitous and relentless. It has such tunnel vision that it can’t even see its own bias.

Whatever else they’re talking about as we go into 2016 – taxes, immigration, life, gun owners’ rights, the family, terrorism – conservatives must have a unified message on the Fourth Estate: The media lies. The media distorts. The media manipulates. If you’re a middle-class, patriotic, God-fearing American, the media is your enemy.

Don Feder is a former Boston Herald writer who is now a political/communications consultant. He also maintains his own website, DonFeder.com. The following story can be found on the GrassTopsUSA website at http://www.grasstopsusa.com/df062715.html.