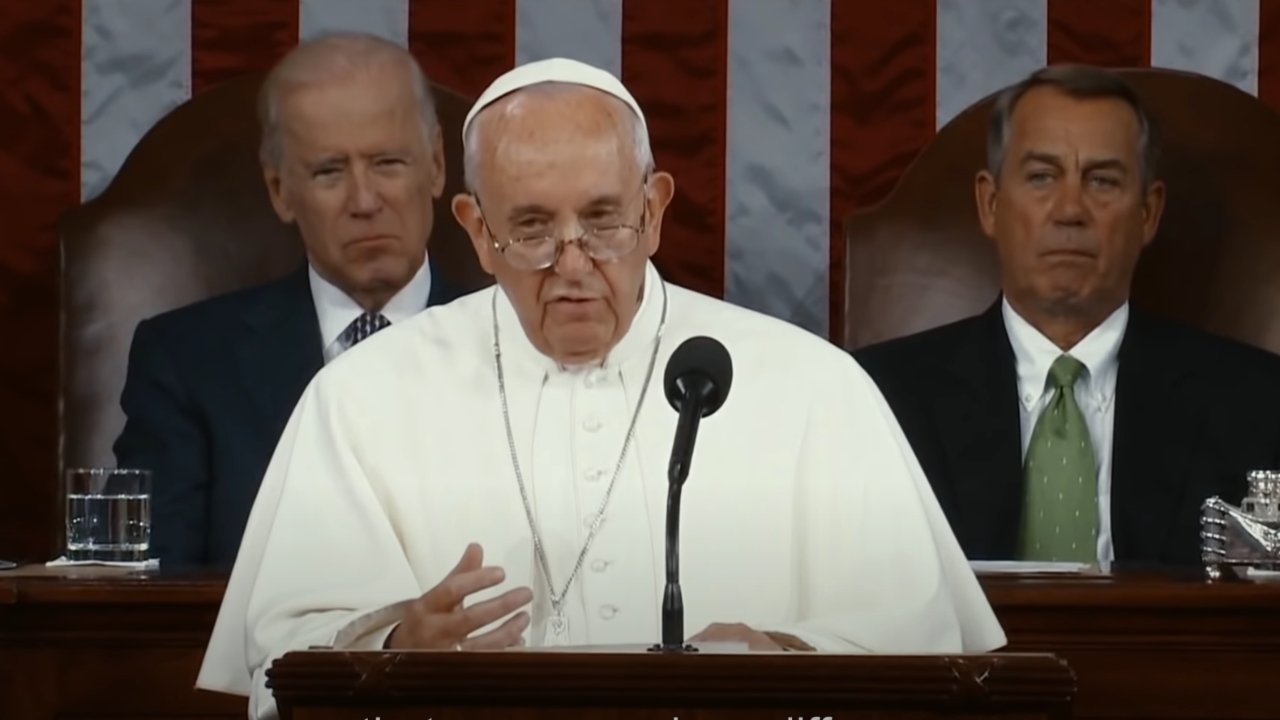 Screenshot of FRANCESCO trailer via
PFX/YouTube

“Homosexual people have the right to be in a family. They are children of God,” Francis said in FRANCESCO, which debuted at Rome Film Festival. “What we have to have is a civil union law; that way they are legally covered.”

What’s more, Pope Francis tells another person in the documentary, Juan Carlos Cruz, that God made him gay.

Cruz says he was a victim of clergy sexual abuse growing up.

Francis’ comments dismayed many Catholics who hold to biblical teachings about homosexuality.

“This will be the last straw for a number of Catholics who have become increasingly incensed at the Pope’s words, which can be read in a variety of ways, often contrary to the faith,” said Edward Pentin. Pentin is an expert on the Holy See and the author of The Next Pope.

“These Catholics, who tend to be church-goers and take their faith seriously, are outraged by these comments and incredulous that a Pope would say this as they say it directly undermines Church teaching,” Pentin said.

The Vatican’s Congregation for the Doctrine of the Faith teaches that “respect for homosexual persons cannot lead in any way to approval of homosexual behavior or to legal recognition of homosexual unions. The common good requires that laws recognize, promote and protect marriage as the basis of the family, the primary unit of society.”

Furthermore, the CDF says that supporting homosexual unions is “gravely immoral,” and “Legal recognition of homosexual unions or placing them on the same level as marriage would mean not only the approval of deviant behaviour, with the consequence of making it a model in present-day society, but would also obscure basic values which belong to the common inheritance of humanity. The Church cannot fail to defend these values, for the good of men and women and for the good of society itself.”

The document continues: “Not even in a remote analogous sense do homosexual unions fulfill the purpose for which marriage and family deserve specific categorical recognition. On the contrary, there are good reasons for holding that such unions are harmful to the proper development of human society, especially if their impact on society were to increase.”

Francis’ comments in the documentary are not the first time he alienated conservative Catholics.

The Atlantic reported that to many members of the church, “Francis is the embodiment of abhorrent modernist, globalist, even secularist values.”

The Pope’s recent comments have forced the Catholic church to scramble, taking a firm stance when many have toed the line.

A Catholic Bishops Conference of England and Wales (CBCEW) spokesman said: “We’d argue there shouldn’t be discrimination on the basis of sexuality and civil unions offer a legislative equivalent. However we understand marriage to be a distinct union between a man and a woman.”

In contrast to the Pope’s stance, the Bible expressly condemns homosexuality and affirms marriage between a man and a woman.