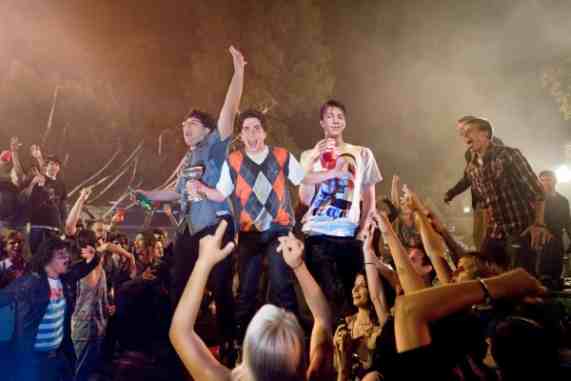 Houston police arrested 13 teenagers recently who broke into a new $500,000 home, threw a raucous party, and trashed the house.

When an officer asked the teenagers the reason, they simply said, “PROJECT X.”

PROJECT X is a movie about a teenager’s friends who hold a massive birthday party in the teenager’s house while the parents are away. The partygoers, including both high school and college students, end up getting drunk, getting high on Ecstasy, completely wrecking the home, and almost burning down the neighborhood!

According to KHOU in Houston on March 12, police said 13 Houston teenagers were taken into custody for the wild party and vandalism. Two of the teenagers were young enough to be returned to their parents.

The teenagers reportedly caused about $100,000 in damage.

The night after the teenagers were arrested, police returned to the neighborhood and found a group of teenagers throwing another massive party.

This isn’t the first time PROJECT X has inspired copycat revelers in Houston.

In fact, an unidentified teenager was shot multiple times at an illegal party in another vacant home, ABC News reported. That party drew between 500 and 1,000 high school and college students. Police shut down the party, but reportedly the gunman escaped.

Foreclosures in the five-year Pelosi/Obama/Reid economic downturn are part of the problem, news sources say. They lead to all the vacant homes available to squatters and young partygoers.

Despite a recent 13 percent drop in foreclosures in January 2012 compared to last year, experts think that trend will be reversed in coming months. That’s partly because a recent $25 billion mortgage settlement will allow bankers to clear a huge backlog of disputed foreclosures. In fact, Houston already has seen a 10% increase in foreclosure notices in February, according to KHOU.

As countless scientific studies have shown, children and teenagers often copy what they see in movies and television.

PROJECT X is an abhorrent movie. It shows the huge devastation that America’s abandonment of Christian, biblical faith and values and consequent descent into depravity, apathy, hedonism, and brutality have wrought.

MOVIEGUIDE®:  The Family/Biblical Guide to Movies and Entertainment was founded to turn this situation around and transform the mass media and the culture with the Gospel of Jesus Christ. However, it’s only as influential as the people of God, whose support sustain it, can make it through their gifts, actions, and verbal support.

As the Apostle Paul writes in Galatians 5:22, self-control is one of the main cardinal virtues that faith in God through Jesus Christ brings. He adds in Verse 24, “Those who belong to Christ Jesus have crucified the sinful nature with its passions and lusts.”

By removing the Bible, prayer, and Jesus from school and government, the government has sewn the seeds of its own downfall.

Don’t wait until tomorrow, next month, or next year to do it. Help us do it today!

“With man, this is impossible, but with God all things are possible.”