The Good, the True and the Beautiful: Box Office Study Shows Movies with Christian, Redemptive Values Earn the Most 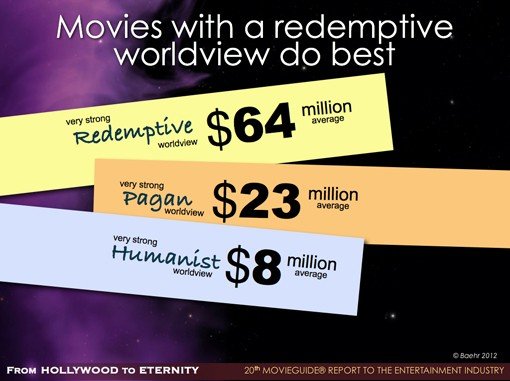 Movies with very strong humanist or atheist worldviews fared even worse, making only $8.4 million per movie.

Also, the stronger the Christian worldview, the more money the movie made.

The movies with very strong Christian, redemptive worldviews includes such movies as PIRATES OF THE CARIBBEAN: ON STRANGER TIDES, TRANSFORMERS: DARK OF THE MOON, COURAGEOUS, SOUL SURFER, COWBOYS AND ALIENS, THE GRACE CARD, THERE BE DRAGONS, OF GODS AND MEN, THE GREATEST MIRACLE, CAPTAIN AMERICA: THE FIRST AVENGER, THE HELP, SEVEN DAYS IN UTOPIA, REJOICE AND SHOUT, THE WAY, and EXTREMELY LOUD AND INCREDIBLY CLOSE.

The same thing was true at the international box office in 2011, and on home video, announced Dr. Ted Baehr, founder and chairman of the Christian Film & Television Commission®.

Also, 90% of the Top 10 Home Video Sales in 2011 had either strong or very strong Christian, biblical, redemptive, and/or moral content or worldviews.

“Filmmakers need to make movies that overtly reflect the faith and values of Christians,” Dr. Baehr concluded. “Hollywood and the mass media cannot afford to ignore biblical values or Jesus Christ and His Gospel.”

He pointed out that more than three quarters of Americans (238 million people), and 2.3 billion people around the world, belong to the Christian faith.