Tom Shadyac’s “I Am” like Creamy New Age Yogurt 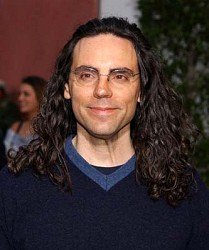 This is a review of a preview screening of Tom Shadyac’s new documentary, “I Am.” The film’s creators invited not just “Hollywood,” but also church types, so as to include feedback from the faithful on this very spiritual and introspective film. What does yogurt have to do with it? Read on and see.

Part “What the Bleep Do We Know” and part Michael Moore-styled factoid journalism, the doc does keep your interest.

It gives a fascinating inside look at an extraordinary Hollywood director, who was caught up in his success. It takes us into the world of his depression, brought on by injuries from a cycling accident. “Persistent Concussion Syndrome” can lead victims into depression and, as in Shadyac’s case, a non-suicidal desire for death.

He had it all, mansions, private planes, cars and all the trappings. From his roles as director and producer to executive producer, Shadyac’s success is legendary, including

But, a cycling accident derailed all of his materialism and he was reduced to a hollow shell of a man, depressed beyond belief. He tried about everything to shake the grip of the syndrome, and he isolated himself to a large degree from friends and family. He welcomed the prospect of death.

And then a funny thing happened. Shadyac found a powerful truth, which shouted at him; he wasn’t any happier for all his vast material wealth. In this, the documentary has it’s kernel of profound, experiential truth.

Shadyac’s “against the grain” conversion to a new philosophy in the midst of his profound emptiness genuine and included a dramatic recovery from his depression. He sold his Pasadena home after much soul-searching and moved into a Malibu trailer park. He now rides his bicycle to work (which respectfully sounds like a very bad idea!).

The film draws you in and you can’t help but be intrigued by it’s feelgood-ism and strong call to be better humans.

The film goes through a litany of human rights and materialism/capitalism/competition offenses, which it naturally lobbies against. A shot of the USA is shown from satellite and the announcer asks what is the problem; the implication: America is the problem.

The not-so-subtle message is that we are victims of a capitalistic society. A system that gave Shadyac countless millions of dollars, private jet rides and a voice to preach about all of this.

But, it’s more than another social justice piece. It is also a compelling re-hash of New Age religion. After the movie, Shadyac said in the Q & A that he thought he would be a preacher someday (or his friends did).

He reaches that goal with this film. Does that mean Shadyac will be labeled a “religious” documentary filmmaker? Probably not, but the label certainly didn’t hurt him A.B. (after “Bruce Almighty”). Box office success talks louder than labels.

“I Am” bolsters it’s brand of spirituality with a generous helping of questionable “science,” some amusing parlor tricks and humor.

The film attempts to take Utopian ideas from the 60’s, ground them in evolutionary science (with a kinder, gentler Charles Darwin espousing love and compassion over competition) and avoid any discussion of man’s need for God, for Jesus and/or for salvation.

The social justice part of “I Am” is simply works-based salvation that doesn’t even get you to heaven! Ostensibly the payoff is a human utopia. Isn’t that an oxymoron?

In which recent decade have we seen anything but largess and disappointment from our human ancestors or our government? The phrase “It will be different this time” is wearing pretty thin.

“I Am” on-camera guests include members of the Institute of Noetic Science, which according to their website focuses “on the intersection of science and spiritual experience, human potential, consciousness and healing, mind-body interaction, social transformation, and creativity” (standard, New Age fare).

In the film, the fact that God is NOT discussed is the elephant in the room, and though Jesus is quoted in the film saying to “love your enemies and pray for those who persecute you,” the focus of the film is on we humans acting as our own savior as we change ourselves into loving beings.

No one will dispute the fact that helping the poor is great and noble and should be done as a part of the Christian faith. But the uniting factor for Christians and the catalyst for lasting change is Jesus the Christ alone, not new age, social justice or weird science.

For this film, the mention of God’s help would be so natural that it’s exclusion is as if Shakespeare left Othello out of the play that bears his name.

After the screening, a question was asked about Shadyac’s involvement in Hollywood, “You must’ve met some really evil people there,” said the questioner. “What about the fact that we are all sinful and what about the collective mentality that produced Hitler’s Third Reich?”

To this, Shadyac said he thinks there are very few “evil” people. He believes that you can’t separate God from people.

But, the Bible’s central point is that we are all separated from God at birth by sin and our own choices and Jesus is the ONLY remedy for this fatal condition. Romans 3:22-23 says “This righteousness from God comes through faith in Jesus Christ to all who believe. There is no difference, 23for all have sinned and fall short of the glory of God” (NIV).

Shadyac hopes to market “I Am” to Christian audiences, but he overlooks the simple fact that it doesn’t line up with the Bible’s fundamental truth.

This is the mis-communication with Hollywood and the Church. Hollywood often thinks that because it mentions spirituality (of any type), that the church will support a film. For example, though the “DaVinci Code” is antithetical to Christianity, it was aggressively marketed to Christian churches. Then the studios wonder why Christian audiences are so fickle.

“I Am” unveils a coming kind of group mindset, which is “proved” to be powerful by the effect of strong emotional events like the fallout of 911 on random number generators set up around the world. The generators became not at all random during that time of upheaval.

The power of the mind is further demonstrated by the effect of Shadyac himself on camera talking and thinking about his agent or his lawyer (and getting strong emotional reactions) as we watch a petri dish full of plain old yogurt register high spikes on an electric meter. The sticky electrodes were not hooked up to Mr. Shadyac, just to the yogurt.

rShadyac also replied to the questions, what was left on the cutting-room floor? Among the many things he was unable to tell in “I Am,” he said that we are all becoming one collective mind as evidenced by the way cells are mutating. Wow.

It sounds far-fetched, but then so does the thought of Christians buying into this movie. And there were some Christians in the room lining up to promote the film and of course to gain favor with Mr. Shadyac.

Romans 2:8-12 says that God is no respecter of persons. He does not show favoritism or compromise his values. Christians shouldn’t either.

What does yogurt have to do with Tom Shadyac’s new documentary? If consumed too fast, you might forget what flavor it was.

According to talk radio host Dennis Prager, “What humans need even more than a good heart (as beneficial as that can be) is wisdom. There has been a war on wisdom. Given how much evil has emanated from human idealism, the heart is an awful guide to doing good.”

If this documentary fares well among Christians it will be because we have forsaken wisdom and allowed our minds and faith to become weak. The film does not have a Christian worldview. It’s not even close!

Marketing this film to Christian audiences is at best ambitious denial of what the film really is. At worst, it is laughing hard at Christians and trying to get them to “swallow the elephant,” along with the creamy New Age Yogurt.

“I Am” is another in a long line of films that promote the idea that we can “fix it” without God’s help. It’s time to acknowledge the elephant in the room and to have an open, honest discussion.

Editor’s Note:  John David Ware (john@168project.com) is the Founder and President of the 168 Film Project, which has birthed over 450 short films in 8 short years. “168” has helped propel the lives and careers of hundreds of media professionals all over the world by teaching them to focus on God’s Word. John has written feature length screenplays including MISSION FIELD, based on a true story of a missionary in Cameroon, and UNCLE FRANK a comedic fantasy about a boy and his uncle’s dog. He has written and directed a comedic parody of Hollywood stereotypes entitled “The Chronicles of Hernia: the Lion, the Ditch and the Studio” (chroniclesofhernia.com). Originally from Columbus Ohio, John went to “film school” at Miami University and graduated with honors. In 1998, he co-founded SLATE Entertainment Fellowship at Bel Air Presbyterian Church, which he led for 5 years. John is a conference speaker and consultant for the Production and Post-Production industries in Los Angeles.