What Movies Do Moviegoers Prefer? 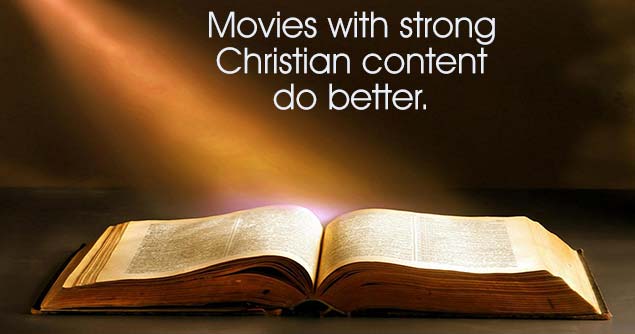 What Movies Do Moviegoers Prefer?

Family and child advocate Dr. Ted Baehr, founder and publisher of Movieguide®, announced the findings today as part of the run-up to Movieguide®’s 2014 Report to the Entertainment Industry, an annual comprehensive financial analysis of the domestic, overseas, and home video film market.

Dr. Baehr will reveal highlights from the 2014 report at the 22nd Annual Faith & Values Awards, to be held Friday, Feb. 7, 2014 at the Universal Hilton Hotel in Los Angeles.

The differences were even wider in a five-year study conducted by Movieguide®.

* MOVIEGUIDE® only used the amount of money that the various worldviews earned in the calendar year they were released. Some Christian, moral movies released toward the end of the year (e.g., THE LION, THE WITCH AND THE WARDROBE, I AM LEGEND, VOYAGE OF THE DAWN TREADER, EXTREMELY LOUD AND INCREDIBLY CLOSE, LES MISÉRABLES, THE HOBBIT:  AN UNEXPECTED JOURNEY) make a lot of money in the following year. The same thing happens with some movies that have very strong Non-Christian, Anti-Christian, immoral, illogical, or false worldviews (e.g., BROKEBACK MOUNTAIN, AVATAR, BLACK SWAN, DJANGO UNCHAINED).

For example, 80 percent of the Top 10 Movies Overseas between 2009 and 2013 had strong or very strong Christian, redemptive content, including positive references to Christianity, Jesus, God, or faith –THE AVENGERS, IRON MAN 3, SKYFALL, PIRATES OF THE CARIBBEAN:  ON STRANGER TIDES, TRANSFORMERS:  DARK OF THE MOON, ICE AGE:  CONTINENTAL DRIFT, and THE HOBBIT:  AN UNEXPECTED JOURNEY.

“It pays to put Christian, faith-friendly content in your blockbuster movies and television programs,” Dr. Baehr added, citing the recent high ratings for TV programs like THE BIBLE and DUCK DYNASTY.

Author of THE CULTURE-WISE FAMILY and the filmmaking book HOW TO SUCCEED IN HOLLYWOOD (WITHOUT LOSING YOUR SOUL), Dr. Baehr is chairman of the Christian Film & Television Commission® (CFTVC) ministry and director of its family guide to movies and entertainment, Movieguide® (www.movieguide.org). CFTVC and Movieguide® are an international non-profit ministry, advocacy group, and watchdog dedicated to “redeeming the values of the entertainment industry by influencing industry executives and by informing and equipping the public about the influence of the entertainment media.”

For more information, visit www.movieguide.org and movieguideawards.com or call 1-888-248-6689.