PIRATES OF THE CARIBBEAN: ON STRANGER TIDES 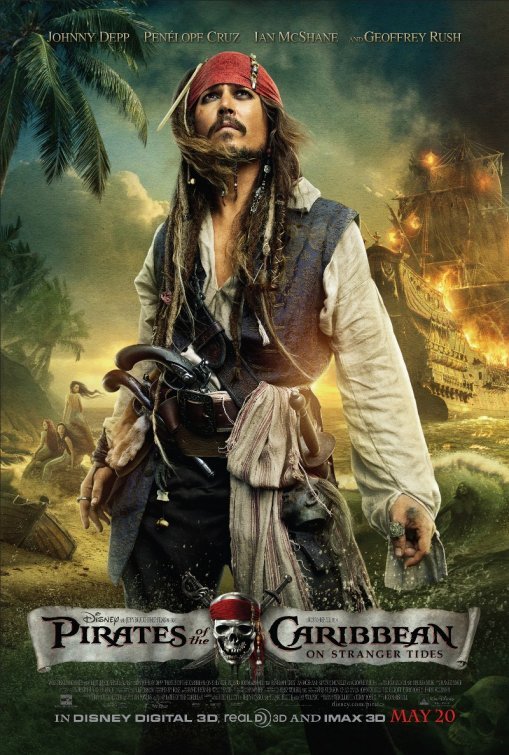 PIRATES OF THE CARIBBEAN: ON STRANGER TIDES is a terrific popcorn movie with a deep redemptive meaning. Captain Jack Sparrow is looking for the Fountain of Youth with the help of Angelica, Blackbeard the pirate’s daughter, a paramour from Jack’s past. They take Jack prisoner on Blackbeard’s ship, Queen Anne’s Revenge. To get the full effect of the fountain, they have to use a mermaid’s tear. Jack doesn’t know whom to fear the most, Blackbeard, Angelica or the mermaids, who seduce men, take them to the bottom of the sea and then eat them.

This version is extremely well edited. It humorously presents lots of salacious content, but it always ends each banter on a moral note and implicitly or explicitly condemns all sorts of immoral behavior. What is amazing about this movie is the amount of saving Christian discussion. There are clear sacramental references with chalices of communion, a baptism, sacrifices, and symbols of the Cross, and there are overt references asking for prayer. Better yet, PIRATES 4 proclaims that only God grants eternal life, not pagan superstition. Caution is advised for the many scary moments and innuendo in PIRATES 4.

(CCC, BB, O, Pa, RoRo, L, VV, S, N, AA, M) Very strong Christian worldview with strong moral points about protecting the weak, keeping one’s word, doing the right thing, sacrificing yourself for others, set in a sinful world filled with voodoo, occultism, sex, debauchery, and piracy, with a missionary character who carries the Bible and lives his Christian faith, and a Spanish general who says only God can give eternal life and who call on God to “destroy this pagan temple,” slightly marred by strong Romantic romance elements where a character seems to be rescued by romance love, not God; three obscenities, including the “d” word and bastard, and three exclamatory profanities such as By God which may not be profanities at all, and lots of positive references with people wearing crosses, crosses on buildings, crosses on maps, Eucharistic chalices, and affirmation that only God can give eternal life; lots of often scary action violence includes constant battles, swordfights, cannonballs, explosions, much fighting, scary skeleton, man shot with dart, man cut with poisonous sword, woman cut with poisonous sword, people hit by coconuts, vicious killer mermaids drag men to their deaths and show their fangs, attempted execution; lots of sexual innuendo in dialogue, woman says she’s pregnant; upper male nudity, mermaids are naked but nothing explicit shown, lots of low-cut dresses, man lands on woman’s bodice; lot of alcohol use and some drunkenness; no smoking; and, lying, cheating, deceit, and stealing but done in a comical manner.

PIRATES OF THE CARIBBEAN: ON STRANGER TIDES is a terrific popcorn movie that could easily be dismissed as more of the same, but it’s better and tighter than the last two.

This time, the story revolves around the time-honored plot device of several different groups trying to get a one-of-a-kind treasure. Only this time, it is eternal life at Ponce de Leon’s famous Fountain of Youth. The parties involved include the Spanish, who find a man at sea who talks about the location of Ponce de Leon’s ship; King George, who has been convinced by Barbarossa to send a ship to find the Fountain of Youth so that Barbossa can get back at his enemy, Blackbeard; Blackbeard’s daughter, Angelica, who wants to save her father; and, of course, the wild card joker Captain Jack Sparrow, played by Johnny Depp.

The king captures Jack to get the Fountain of Youth map Jack has, only to have Jack escape. Meanwhile, Jack’s first mate, Gibbs, steals the map.

Jack finds out someone is posing as him and, after a terrific swordfight, this doppelganger turns out to be Angelica, Blackbeard’s daughter. They take Jack prisoner on Blackbeard’s ship, Queen Anne’s Revenge. The Spanish pass them in the race for treasure. Barbossa chases them.

Amazingly, a missionary on board says that even Blackbeard can be saved, calls everyone to repentance, and is willing to sacrifice his life for everyone.

To get eternal life, they have to bring two silver communion chalices to be found on Ponce de Leon’s ship teetering on the edge of a cliff. One chalice needs a mermaid’s tear plus the Fountain of Youth water. The other chalice just gets the Fountain of Youth water. The person who drinks the water with the mermaid’s tear will live, because they’ll get the years of life of the person who drinks the cup without the mermaid’s tear. This means a mermaid has to be captured.

The mermaids are incredibly beautiful, but they seduce men, take them to the bottom of the sea, and then eat them. There’s a tremendous battle with the mermaids and one is eventually captured. The missionary befriends her.

PIRATES OF THE CARIBBEAN: ON STRANGER TIDES is extremely tight and well edited. It humorously presents lots of salacious content, but always ends each banter on a moral note and implicitly or explicitly condemns all sorts of immoral behavior.

What is amazing about ON STRANGER TIDES is the amount of Christian content. There are clear sacramental references with the chalices of communion, a baptism, the sacrifices, and symbols of the Cross, and there are overt references asking for prayer, praying for God to destroy the pagan temple and noting correctly that only God gives eternal life. In many ways, the missionary is the best character in the movie.

For those who care, Johnny Depp is delightful; Hans Zimmer’s music is fabulous; and, the rest of the cast is fun. All in all, this is a delightful popcorn movie labor of love.

On the other hand, it is scary and contains voodoo, magic, phantom ships, mermaids, and lots of sexual innuendo. Thus, the redemptive Christian themes in PIRATES OF THE CARIBBEAN: ON STRANGER TIDES are set in a sinful world, just like the real world that all of us inhabit.

Rent or Buy PIRATES OF THE CARIBBEAN: ON STRANGER TIDES: