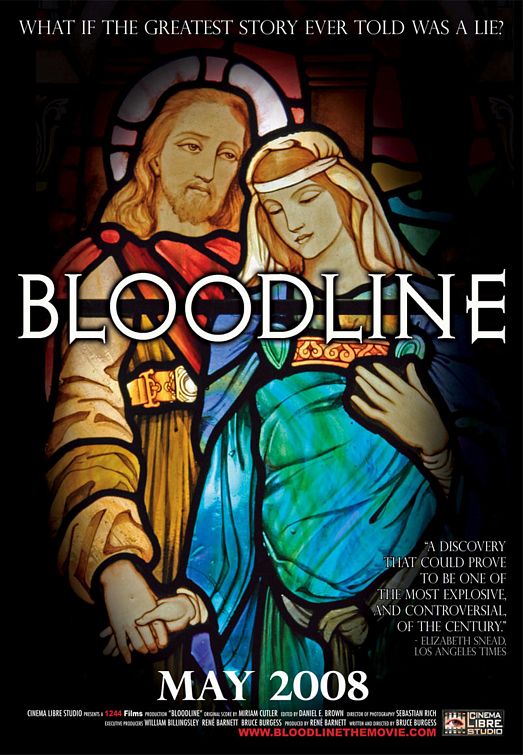 BLOODLINE is a lame documentary, which attempts to prove that Jesus Christ married Mary of Magdalene, fathered children and died on the cross. It contends Mary took His body to the south of France where it could be found today mummified in a hidden crypt. The only “proof” offered is the supposed discovery of a small crypt accessed via a small remote camera. Inside is a mummified corpse they claim to be either Mary Magdalene or a descendent and that behind a wall is the body of Jesus.

There’s nothing new about BLOODLINE. It’s just a silly rehash of false DA VINCI CODE conspiracy theories. The story is told in an unconvincing “cloak and dagger” manner. Their revision of history includes that Mary stole Jesus’ body, unknown to the disciples, leaving the tomb empty. This supposedly explains how the story of Jesus’ resurrection happened. However, the movie doesn’t address that Jesus appeared to the disciples and then to crowds after He rose from the dead. In fact, He appeared in resurrected form to Mary Magdalene herself. These facts are not even addressed, yet have been proven many times to be true.

BLOODLINE is a so-called documentary which attempts to prove that Jesus Christ married Mary of Magdalene, fathered children, died on the cross, and then Mary ferried His body away to the south of France where it could be found today mummified in a hidden crypt.

The proof they offer is the supposed discovery of a small crypt that can only be accessed by a small remote camera. Inside this crypt is a mummified corpse covered in a perfectly displayed Knights Templar shroud. Somehow, remotely they cut through the shroud and have video of the corpse and even took a lock of hair, which DNA suggests that the corpse is Middle Eastern in ancestry. Viewers don’t see how they cut the shroud with a small remote video camera, nor how they plucked the hair. Somehow this proves for the filmmaker that the corpse is Mary Magdalene or perhaps one of her children. It is buried in this hidden crypt at the site of Father Sauniere’s church, which was the subject of THE DA VINCI CODE book and movie. In this church are many paintings and statues of Mary Magdalene which they say portray her and Jesus in a marriage ceremony and points to the secret that Jesus did not come back to life and is in fact buried next to Mary, but behind a closed off wall.

The movie populates the screen with experts who are book authors with books to sell about the subject of the non-deity of Jesus. There is quite a bit of “a guy told me” or “locals have always known this” without anything that even resembles evidence.

The filmmakers interview Nicholas Haywood, who claims to be a spokesperson for the Priory of Sion, the secret organization that supposedly knows where Jesus’ body is and will only let out information about it a little bit at a time. It just so happens that this film is the time to let out the information. An amateur explorer, Ben Hammott used the Magdala church to decode the message which led him to discover notes in bottles from Father Sauniere which give coded maps. These, in turn, led to the discovery of the cave where the corpse was found.

This is all too convenient. Viewers get to see Hammott discover many of these things on camera, unclear if this is a re-enactment or if the camera crew just happened to be there when the items were discovered. The items were carried back to a house where they were examined. None of this was done with any attempt to preserve the artifacts, especially the paper sealed in wine bottles. Do they not care about the exposure to air or the other technical issues that should accompany such an allegedly “important” find?

The other element (though with no evidence) is that the filmmaker’s life is in danger and that his cell phone is being bugged. Again, it’s “we have reason to believe” kind of language. It makes BLOODLINE come off as a bad spy movie.

The filmmakers claim that people die who have gotten close to this secret. They shoot much of the movie at night with flashlights and such, trying to give the impression that what they are doing is secret. Any credibility or sincerity that the movie might have had is ruined by this “cloak and dagger” element, along with an unrelenting suspense movie type musical score.

Also, there are quite a bit of people who won’t appear on camera, including a recording of a “high Vatican official” who says that the Vatican knows that Jesus’ body is in the south of France, but it’s not time yet to reveal it. Then, the movie sets up a sequel, as the filmmaker turned star will continue to look for the body of Jesus. The filmmaker himself specializes in sensational topics, including a previous movie about the Bermuda Triangle.

As if any of this is not silly or disturbing enough, the ending of the movie takes it to a new level. Experts and then “man on the street” interviews discuss what this discovery of Jesus’ body will mean. One expert says that it will usher in a new era of Christianity since Jesus now has gender balance, being partnered with Mary. The expert goes on to make the extravagant claim that the Holocaust would not have happened had this been our understanding of Jesus. What one thing has to do with another is anyone’s guess.

Erroneous statements are made that the gospels were written hundreds of years later, which has been proved to be false countless times. In fact, the best scholars now believe that all the New Testament documents were written before 70 A.D., and that most of them were written well before that. The feminist expert goes on to say that this revelation of the non-deity of Jesus is actually the second coming of Jesus, the revelation of who He really was. Hasn’t this silly person ever read the Book of Revelation?

One significant missing element that this movie does not address in its revision of history is that they supposedly claim to explain the empty tomb of Jesus because Mary stole the body. They claim the disciples didn’t know about this, and so they saw the empty tomb and reported Jesus had risen from the dead. However, the movie doesn’t once address that Jesus appeared to the disciples and then to crowds after He rose from the dead. In fact, He appeared in resurrected form to Mary Magdalene herself. These historical facts are not even addressed.

If any friend happens to see this move, encourage them in their search for the truth about Jesus and give them a copy of the book or DVD, THE CASE FOR CHRIST, by Lee Strobel. Unlike this movie, it is filled with stacks of evidence that the biblical Jesus is true. Please pray for these filmmakers that Jesus, who is alive even today, will speak to their hearts and reveal the truth to them.