"God Loves Us, So ‘Light Up the Darkness’ and ‘Fulfill the Book’" 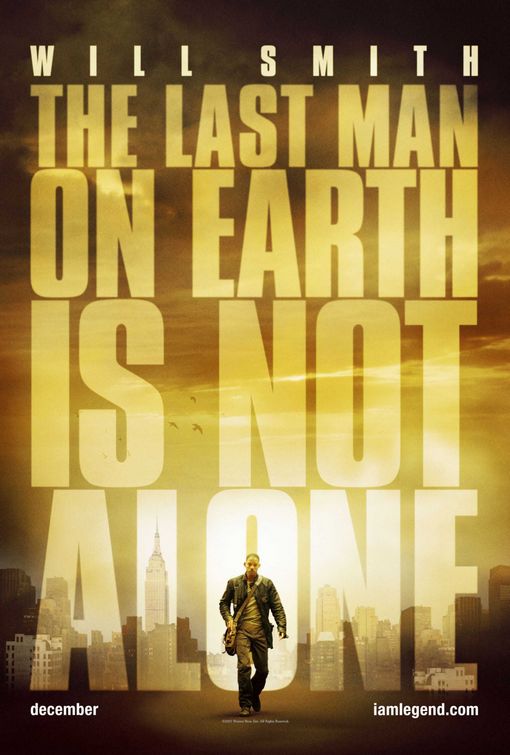 I AM LEGEND is a very scary, but literate, science fiction thriller. Will Smith stars as Robert Neville, a brilliant military scientist. He believes he is the last survivor of a cancer cure gone awry. The cure has mutated into an airborne blood infection that turns people into cannibal killers who shun light. Neville is immune, however. He works feverishly to find a cure using his own pure blood while trying to hunt for food during the day and avoid the crazed infected humans at night. His faith and trust in God waning, Neville’s attempt to save the human race hits a snag. A clever leader has risen among the infected humans to lead them against Neville.

Based on the acclaimed science fiction novel by Richard Matheson, I AM LEGEND is exhilarating, riveting, touching, profound, and brilliantly directed. Will Smith delivers a powerful, extremely emotional performance. Though not very gory, the movie is too scary and violent for children and sensitive moviegoers. It also has some foul language. That said, the movie has a very strong redemptive worldview, with profoundly moving metaphorical Christian references showing the world that God loves us.

(CCC, BBB, LL, VVV, N) Very strong redemptive, somewhat allegorical or symbolic, Christian worldview with very strong moral elements, including a plea to “light up the darkness” and a very strong servant perseverance to find a cure for a terrible world-shattering virus that turns people into murderers and cannibals, and including positive references to Jesus Christ and the death of Christ on the Cross when a man is rescued from evil crazed beings, two signs assure people “God still loves us,” the movie answers the question does God still love us in the affirmative, protagonist is a messianic figure symbolically in the mold of Christ (though no one can replace what Jesus has done for us), woman encourages man to believe in God, Christian family prays together in one scene, man’s angry rejection of woman still clinging to belief, trust and hope in God is seen as false and man regains his faith in God, symbolic references to the sacrificial death of Jesus Christ as well as to His vicarious atonement and to the salvation that comes through Christ’s shed blood, overt references to God that counteract questions in the movie about whether God exists and whether He still loves us despite our serious human frailties and spiritual blindness, symbolic references to the light of salvation and the darkness of sin, and a bucolic, peaceful image of deliverance from evil has a church and its spire at the center of it, plus Bob Marley sings “Redemption Song” over the end credits, which says, “My hand was made strong by the hand of the Almighty,” Emancipate yourselves from mental slavery,” “None but ourselves can free our mind,” and “We’ve got to fulfill the book”; six obscenities, one strong profanity that’s hard to catch, and three light profanities; very strong, intense action violence with some blood but no substantial gore, such as scary human creatures infected by virus chase and viciously attack people, man enters dark hideout of scary human creatures who chase him to murder him, explosions, implied copter crash, fighting, man shoots attacking human creatures who have turned into vicious killers, lion suddenly grabs deer and kills it, a few animals injured or killed, man captures and binds human creature to test cure for virus, virus infected dogs attack man and other dog that’s not infected, and man risks his life for others; no sex but man talks to female mannequin as if he were wanting to eventually ask her out; naturalistic upper male nudity; no alcohol; no smoking; and, nothing else objectionable.

I AM LEGEND is an action thriller. It is a scary science fiction thriller. It is a character drama. And, it is a story of how one man regains his faith in God to make a sacrifice for the whole human race. In fact, the movie asks the question, Does God still loves us? And, it answers that question in the affirmative.

Will Smith stars, in one of the year’s best performances, as Col. Robert Neville, a brilliant military scientist. The movie opens in 2009 with a TV news interview in which a female scientist matter-of-factly, and perhaps a little too triumphantly and smugly, announces she has discovered a cure for cancer by genetically altering the cancer virus or cancer cells.

Cut suddenly to 2012 in New York City. The streets are completely deserted with patches of weeds growing in the concrete and piles of abandoned cars in places. Neville, with his daughter’s grown German Shepard puppy Samantha in the passenger seat, races a bright red Mustang car through the streets while chasing after romping herds of deer.

From this slam-bang opening, the movie reveals that Neville believes he is the last healthy man alive. All the other humans are either dead or transformed into raging angry cannibals infected by the mutating virus cells. Neville, however, is immune to the airborne version and the blood-infected version of the virus. By day he hunts for food and sometimes hunts for an infected human, so that he can test various potential cures on them, cures that are developed from his own pure blood.

Once hailed by Time magazine as the possible savior of the human race, Col. Neville and his blood still may save the world. But, can he maintain his faith and hope in God to survive long enough to find the cure? Especially when the infected humans seem to have found themselves a clever leader who intends to make Neville their latest victim?

Based on the acclaimed, influential 1954 science fiction novel by Richard Matheson, I AM LEGEND is one of the best edited, best directed action movies in quite some time. It compares very favorably with SPIDER-MAN 2 and THE INCREDIBLES, though it is a more scary and violent movie. Will Smith gives a powerful, at times incredibly heartbreaking, and ultimately redemptive performance. He deserves to be one of the five Oscar nominees for Best Actor.

I AM LEGEND is too scary, however, for children, and even for many adults. It also contains some strong foul language. This content deserves extreme caution, especially for sensitive moviegoers.

That said, the movie has a very strong redemptive worldview. That worldview includes many positive allusions to Christianity and belief in God. These allusions include a positive reference to Jesus, overt and symbolic references to Christ’s sacrificial, vicarious death on the Cross and to His shed blood, overt references to God that counteract questions in the movie about whether God exists and whether He still loves us despite our serious human frailties and spiritual blindness, symbolic references to the light of salvation and the darkness of sin, a positive scene with a prayer to the Lord, and a bucolic image of a peaceful church that symbolically points the way to salvation and ultimate fellowship.

Overall, therefore, I AM LEGEND is one of the most scary, intense action thrillers of recent years, but it is also one of the best, most striking, most riveting, most touching, most thrilling, most satisfying, most profound, most eloquent, and most spiritually uplifting movies in recent memory.