"Engaging, But Ultimately Forgettable and Gratuitous" 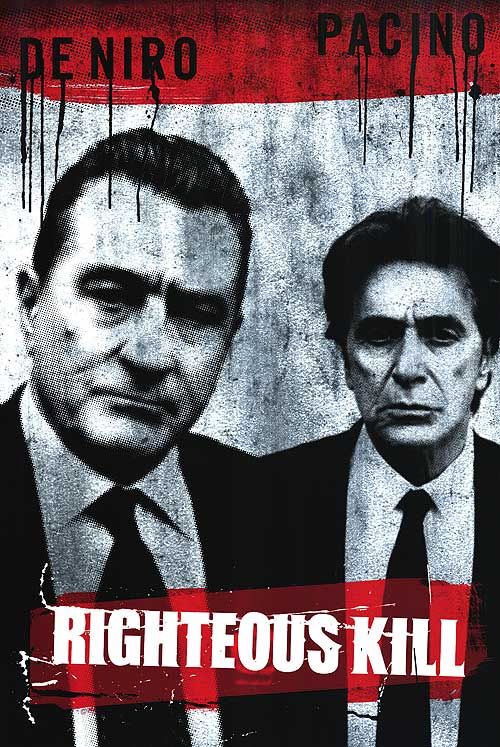 RIGHTEOUS KILL stars Robert DeNiro and Al Pacino in a foul-mouthed movie about two veteran police detectives in New York City investigating a series of vigilante slayings of evil criminals. DeNiro plays an angry detective nicknamed Turk. Pacino plays his more mild-mannered partner, Rooster. After an opening that goes in several directions at once, their boss assigns Turk and Rooster to head the investigation into the vigilante slayings. When another detective working with them suggests the killer is a cop, Turk gets very angry. He gets angrier when suspicion lands on him. Two surprising twists wrap up the story in an exciting finale.

RIGHTEOUS KILL is exciting enough. The acting and direction, especially DeNiro and Pacino, are also professional and watchable. The movie is somewhat forgettable otherwise. Some viewers may guess at least one, if not both, of the major twists. The movie’s constant foul language and offensive sexual content also take away from its enjoyment. This will be especially true for media-wise viewers. The negative content will greatly hurt the movie’s appeal to mainstream audiences, despite the obvious attraction of putting DeNiro and Pacino together again in a movie.

(PaPa, H, C, B, Ab, LLL, VVV, SS, N, A, DD, M) Strong, somewhat mixed, pagan worldview in a gritty police thriller, with pagan, humanist, Christian, moral, and anti-Christian elements jumbled together in a mix that doesn’t quite jell, including a pedophile Catholic priest is murdered with two protagonists having nominal vestiges of a Catholic faith (including a short scene where they are shown praying in a church) and a couple comments about losing one’s faith but comments are not really referring to religion; at least 175 mostly strong obscenities, four strong profanities, one light profanity, an obscene gesture, some crude comments; very strong violence with some blood includes bloody wounds on head of young female corpse, people shot to death, vigilante murders, man falls from a height after being shot, implied beating and possible implied rape of woman; strong sexual content includes depicted fornication, implied fornication, implied sadomasochism, some sexual comments meant as sarcastic comedy, and brief suggestive dancing; upper male nudity, woman in underwear, and female dancers with short skirts in crowded dance nightclub; alcohol use; smoking and reference to cocaine use; and, vigilante justice, lying, framing an evil criminal for a crime he didn’t commit.

The movie opens with Turk deliberately framing a man who got away with killing his girlfriend’s young daughter for another crime. Rooster warns Turk not to do it, but he lets him get away with it anyway.

After a confrontation with a black drug lord, Turk and Rooster head the investigation into the vigilante slayings. Working with them is the former boyfriend of Turk’s girlfriend and his partner, Perez and Riley (played by John Leguizamo and Donnie Wahlberg, respectively). When Perez suggests that a policeman is behind the vigilante murders, Turk gets very angry. Then, suspicion actually begins to fall on Turk, which makes him even angrier. Two surprising twists wrap up the story in an exciting finale.

One, and possibly both, of the major twists in the third act may be predictable to some (if not many) viewers. Certainly the first, and most simple twist, is the easiest to figure out, even early in the story (which was when MOVIEGUIDE® figured it out). The second twist is more of a surprise, though it resulted in some confusion about the characters for MOVIEGUIDE® as it tried to take its usual comprehensive notes during the movie. When the twist is revealed, the confusion is cleared up, but it’s hard to tell how fair the twist really is.

RIGHTEOUS KILL is exciting enough. The acting and direction, especially DeNiro and Pacino, are also professional and watchable. The movie is rather forgettable otherwise, however. The constant foul language, and the movie’s offensive sexual content also take away from the movie’s enjoyment, especially for media-wise viewers like MOVIEGUIDE®’s staff of media-wise pundits. The movie’s worldview is too mixed to be completely inspiring, much less redemptive. This negative content probably will greatly hurt the movie’s appeal to mainstream audiences, despite the obvious attraction of putting DeNiro and Pacino together in a movie.