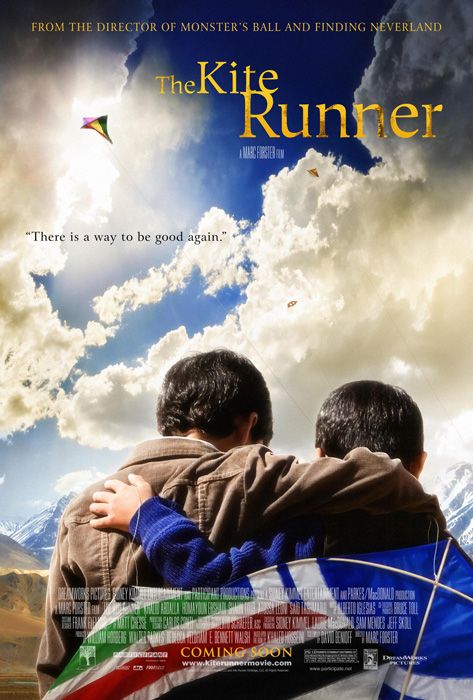 THE KITE RUNNER is based on the acclaimed novel. Afghanistan is on the verge of being invaded by the Russians in 1978, but Amir and Hassan are two best friends who only know the joys of kite-flying. Working together, Amir and Hassan win the city’s biggest kite-fighting tournament. Their joy turns to heartache when Hassan is beaten and raped by a gang of bullies, while Amir watches secretly and does nothing. Ashamed and feeling guilty, Amir turns against Hassan. He betrays the poor boy. Twenty years later, a wiser Amir tries to make amends by returning to Afghanistan. There, he must confront an evil Taliban leader in order to rescue Hassan’s son.

This passionate, suspenseful story is executed brilliantly by director Marc Forster of FINDING NEVERLAND, with a cast of talented, virtually unknown actors. The movie tells a heartbreaking tale of moral redemption, but a crucial scene shows Amir praying in a mosque while a song talks about earning forgiveness through the Islamic god Allah and the false Muslim prophet, Mohammed. Mohammed, of course, killed his enemies, but Jesus Christ died for His enemies. No one can replace Jesus.

(PaPa, FRFR, BB, AC, PC, H, Ho, L, VV, S, N, A, D, M) Strong mixed pagan worldview includes strong Muslim references in the movie’s premise, where a song talking about Allah and making a positive reference to Mohammed occurs at a crucial moment when the troubled protagonist finds forgiveness through Islam rather then Jesus Christ, but with strong moral elements, including references to God in English in a society that’s vaguely depicted as Muslim (except for a couple archetypal Muslim uses of the word “inshallah” [if Allah wills], only the song positively mentions Allah and Mohammed and the movie’s main villains are the former Islamic Taliban leaders in Afghanistan) and including anti-Communist statements, plus, however, a couple politically correct, humanist implications about religion, such as movie implies that those religious leaders who utter epithets about homosexuality are probably just sick latent sadomasochistic homosexual pedophiles themselves; one obscenity and two strong profanities, plus teenager utters an epithet about homosexuality; strong violence includes boy beaten, implied forced sodomy, gunfire, man beaten, drops of blood on snow, and man hit in eye and he covers his face with some blood streaming through his hand and on his head; implied homosexual rape and Taliban thugs humiliate one boy by putting make-up on him and forcing him to dance for them; upper male nudity in medical scene; brief alcohol use; smoking; and, lying, boy frames another boy, boy does nothing when he sees his friend beaten up, and bullying.

THE KITE RUNNER is one of the most powerful movies of the year, but a crucial scene shows the troubled protagonist overtly seeking and finding forgiveness through Islam, including its problematic vision of God (who is called Allah in Islam) and the Prophet Mohammed. This scene bogs down the movie’s premise with false Muslim theology and damages what is otherwise a very compelling story of friendship, guilt and redemption.

Based on the acclaimed best-selling novel by Khaled Hosseini, the movie opens in San Francisco in the year 2000. A young writer named Amir has just received copies of his first published book when he gets a call from Rahim, an old family friend now living in Pakistan. Rahim tells Amir that the son of Amir’s childhood friend, Hassan, is in trouble and needs Amir’s help. As Amir packs for Pakistan, he recalls what happened in 1978 in Kabul, Afghanistan.

Amir and Hassan desperately want to beat the city’s current champion, another rich boy like Amir. With Amir’s widowed father watching proudly, they get their chance in the biggest tournament of the year. Hassan goes to chase down their rival’s kite, but a group of older boys, who tried to bully Hassan and Amir before, grab Hassan and take him to a secluded alley. With Amir watching secretly from the shadows, they beat up and sodomize Hassan.

Ashamed of what happened to Hassan, and feeling guilty about his lack of courage, Amir takes it out on Hassan. He even frames Hassan, planting the new watch his father gave him under Hassan’s pillow. Amir’s father is ready to forgive Hassan, because Hassan’s father is his own closest friend. Hassan’s father is too proud to stay there any longer, however, and he and Hassan leave.

Then, in 1979, the Russians invade Afghanistan. Amir’s father has spoken out against the Communists, so Amir and he leave for Pakistan. They barely escape with their lives to America, but Amir’s father, a rich man in Afghanistan, must take a job as a convenience store clerk. Years later, Amir goes to community college, starts a struggling career as a writer and marries Soraya, the beautiful daughter of an exiled general from Afghanistan. Sadly, however, Amir’s father dies soon after the wedding.

The story cuts back to 2000, with Amir going to Pakistan to meet Rahim, who is dying. Rahim tells Amir that the Taliban, the Muslim fanatics who took over Afghanistan from the Russians, have killed Hassan and his wife, leaving their only son an orphan. He asks Amir to return to that perilous country and save the boy. Amir knows what he must do, but, in doing it, he has to face the dark secrets that still haunt him, including the leader of the bullies who helped destroy Amir’s friendship with Hassan 22 years ago.

This passionate, suspenseful story is executed brilliantly by director Marc Forster, who also directed FINDING NEVERLAND and STRANGER THAN FICTION. A talented cast of virtual unknowns lends credibility to the story, which is a heartbreaking tale of moral redemption.

THE KITE RUNNER has many good things in it, but a crucial scene at the story’s climax shows the protagonist praying for forgiveness in a Muslim mosque. During that scene, a song on the soundtrack talks of seeking and finding forgiveness through the false Muslim god, Allah, and through Mohammed, the brutal false prophet who has led billions of people away from Jesus Christ and into eternal damnation. Mohammed, of course, killed his enemies, but Jesus Christ died for his enemies and their salvation. No one can replace Jesus, who is the one and only true Divine Savior who saves us from our sins.