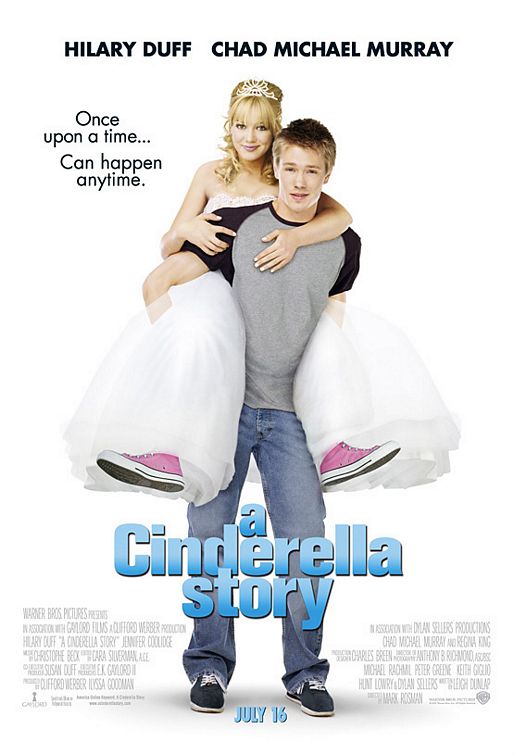 A CINDERELLA STORY is a story of doing the right thing, counting your blessings, and finding the true rewards of doing so. It’s a modern re-telling of the Cinderella fairy tale, starring Hilary Duff as Samantha Montgomery, a high school student who meets who Prince Charming online. When her anonymous cybermate turns out to be the high school’s popular, handsome quarterback, Austin Ames, she freaks out and leaves her cellphone behind, just before the clock strikes midnight.

Wonderfully written, A CINDERELLA STORY keeps getting better and better as it tells the classic story of Cinderella in a contemporary setting. This is pretty hard to do, especially since the movie starts off at a high level of good humor and moral fundamentals. The jokes stem from the moral premise, the bad is rebuked, and the good is clearly deeper than just superficial. The movie extols kindness, love, compassion, decency, and all the cardinal Christian virtues in a positive, winsome, attractive way. Hilary Duff has never been better, and Chad Michael Murphy as Austin is also superb. Dan Byrd as Samantha’s friend Carter almost steals the movie. A CINDERELLA STORY is a must-see movie for all ages.

(CC, BBB, L, V) Christian worldview, with giving, sharing, serving, obedience, and, most of all, grace, as well as references to blessings and prayer, with a romantic fairy tale storyline that has is not philosophically Rouseauian Romantic because it is not a "follow your heart" message, but rather a "do the right thing" message; one obscenity and four exclamations of “Oh my God!”; some comic violence including slipping on a wet floor, being hit with a pie, being hit by a baseball, and other slapstick humor; one lightweight character is a comic foil, but is not identified as homosexual, and kissing; no nudity; no alcohol; no smoking; and, lots of moral messages.

A CINDERELLA STORY is one of the three best produced movies of the summer of 2004. It’s certainly the best romantic comedy for teenagers. It is wonderfully, entertainingly written and avoids all the politically correct sexual hijinx that usually bog down teen romantic comedies. In fact, at its heart, it’s a story of doing the right thing, counting your blessings, and finding the true rewards of doing so.

At the beginning of the movie, a little girl named Sam, short for Samantha, is playing with her father, who owns a friendly diner in the San Fernando Valley. He takes good care of her, because her mother, his wife, has died. Life seems perfect, except Sam’s father thinks that Sam needs a mother, so he marries Fiona, a “witch” who is played to the hilt by Jennifer Coolidge. Fiona is really wicked in her self-centered way and has two miserable, selfish twin daughters. When Sam’s father dies in the Northridge earthquake, Sam is relegated to being a servant of Fiona and the wicked stepsisters.

At school, Samantha’s only friend is Carter, a wannabe actor who tries out different roles everyday. They are the brunt of cruel jokes from the “in” crowd, but unknown to everyone, Sam is having a text messaging romantic dialogue with the big hunk on campus, Austin, who is the captain of the football team and a member of one of the cliques that embarrasses her every day. They both want to go to Princeton, so they cyber-met in a Princeton chat room. They have a lot in common, except they’ve never met each other on friendly terms on campus.

During the big Halloween dance, Sam dresses up as a princess, and by text messaging, Sam and Austin agree to meet on the dance floor at 11 p.m. Love strikes them both, but she has to get back to the family diner by 12 or face the wrath of Fiona. Soon after the dance, her emails are found by her stepsisters, who use the emails to embarrass her at a pep rally for the football team. From that point in the story, the plot takes an even deeper and very gratifying redemptive turn.

A CINDERELLA STORY keeps getting better and better as the movie tells the classic fairy tale story in a contemporary setting. This is pretty hard to do because the movie starts off at a high level of good humor and moral fundamentals. The jokes stem from the moral premise, the bad is rebuked, and the good is clearly deeper than just superficial. The movie extols kindness, love, compassion, decency, and all the cardinal virtues in a positive, winsome, attractive way. Therefore, this is a must-see movie for all ages.

The talented Hilary Duff has not been known for her acting, but she does a terrific job in this movie expressing nuanced emotions in a profound yet humorous way. Chad Michael Murray as Austin is also superb. But, Dan Byrd who plays Carter almost steals the movie – he is at the same time a nerd and a suave, professional wannabe actor. He’s funny and disarming.

Some of the jokes in the movie are retreads, of course, but they’re done in such a fresh way that they make you laugh out loud. Other jokes, though, are just superb, and you’ll probably want to see the movie twice to catch them all. One superb line says something like: “In California, it’s not who you are, but what you wear.” However, the movie is interested in who you are, not what you wear.

The central message of the movie is very biblical: never let the fear of striking out keep you from playing the game. This echoes the only message found in every book of the Bible: “Fear not.” Why should we not be afraid? Well, because we live in a world created by God who loves us and who has a wonderful plan for our life even when everything seems to be falling apart.

A CINDERELLA STORY should be used in script classes to help demonstrate good scriptwriting. Bravo! It’s the perfect complement to SPIDER-MAN 2.

Rent or Buy A CINDERELLA STORY: