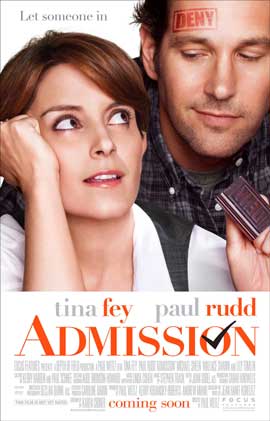 ADMISSION is about Portia, an admissions officer at Princeton University. She’s lived a contented but boring life for 16 years. She’s spent the last 10 years with a live-in boyfriend, a Princeton English professor. John, a former college classmate, convinces Portia to consider the application of a sensitive and odd, but brilliant, student of his named Jeremiah. When she visits their quirky high school, John mentions a new twist. He thinks Jeremiah may be the son Portia gave up for adoption years ago. Portia gets to know Jeremiah and John. Then, her boyfriend leaves her for another woman. With her life in turmoil, Portia decides to bend the rules for Jeremiah. How far will she go?

Strong performances, combined with some good writing, make ADMISSION an above-average comedy. ADMISSION adds twists that make it unpredictable and surprisingly thoughtful. Happily, the movie also contains some light but solid moral elements. However, not all the final twists seem to work. Sadly, ADMISSION has a strong Romantic worldview with a somewhat promiscuous attitude toward sex and plenty of foul language. So, extreme caution is advised.

(RoRo, PC, Fe, Acap, So, B, LLL, V, S, N, A, DD, MM) Strong Romantic worldview with some light liberal/leftist politically correct content including some light feminist elements but the one overt feminist is a mixed character with flaws, a couple anti-capitalist and socialist-sounding statements in one scene by two young high school students, and light moral elements where God is thanked a couple times and some consequences are suffered when lead character solves a plot problem by deliberately cheating but gets caught; 21 obscenities (including one “f” word), six strong profanities, nine light profanities, and woman gets upset and vomits in bushes; light comic violence when woman accidentally hits newlywed car of former lover and when mother points shotgun at man and threatens him because of a misunderstanding; three scenes implying fornication, a couple has been living together for 10 years but man has cheated on the woman, a man has gotten another woman pregnant, but they get married, some passionate kissing, and talk about unwed pregnancies (but not salacious); upper male nudity and some female cleavage, including a scene where male/female leads are opposite one another in two shower stalls in an outdoor shed (but nothing salacious shown); alcohol use, including some implied use at a college frat party in one brief scene; no smoking but brief drug reference; and, cheating to solve a plot problem but some consequences are suffered, female protagonist’s relationship with her mother is strained, mother talks about getting a mastectomy because of breast cancer.

ADMISSION is a well-written comedy about a Princeton University admissions officer tempted to bend the rules for a boy she thinks is her long-lost son. ADMISSION has a Romantic worldview promoting loose sexual morals, with some light moral elements and plenty of foul language.

ADMISSION stars Tina Fey as Portia Nathan, an admissions officer at Princeton University who has lived a satisfied but boring life for 16 years. She’s spent the last 10 years of that time with her live-in boyfriend, a Princeton English professor from England.

Portia’s life starts to get shaken up when the Dean of Admissions makes two key announcements. First, he’s retiring next year. Second, since Princeton has slipped to second in a list of the top colleges, he’ll fill his position with either Portia or her long-time female rival, based on who brings in the most outstanding students.

Meanwhile, John, a former classmate of hers who runs an alternative high school that’s like a hippie farm commune, but without the sex, convinces Portia to consider the application of a sensitive and odd, but brilliant, student of his named Jeremiah. When she visits the school, John throws a new twist at her. He thinks Jeremiah may be the son she gave up for secret adoption years ago.

As Portia gets to know Jeremiah, she has to decide whether to come clean about her past to him. She also starts becoming attracted to John, especially when her boyfriend leaves her because he got another English professor pregnant.

Portia starts bending the rules for Jeremiah after she discovers that his earlier high school career has some pretty big holes in it. When it looks like the admissions committee might very well turn him down, how far will she bend the rules?

Tina Fey as Portia and Paul Rudd as John have a fun chemistry, but Lili Tomlin almost steals the show as Portia’s eccentric, but feminist, mother. The strong performances, combined with smarter than expected writing, help make ADMISSION an above average outing for a Hollywood romantic comedy. ADMISSION also adds some detours and twists that make it an unpredictable, surprisingly thoughtful study in ethics as well.

However, not all the twists in the third act seem to work. Also, although ADMISSION has a light moral tone when it comes to promoting adoption and discussing the ethics of being a college admissions officer, that’s not entirely true when it comes to the sexuality of its characters. The sexual content isn’t explicit, but too many characters hop in and out of bed with other people. Thus, Portia’s live-in boyfriend confesses he loves another woman and has gotten her pregnant. Despite her boyfriend’s cheating, Portia eventually hops into bed with her new love interest, John. Furthermore, she herself is the product of an intentional, illicit one-night stand. Her feminist mother wanted a baby but didn’t want the father to be a man who would stay with her. Much of this content is played for laughs, even though it becomes clear that the feminist attitude of Portia’s mother toward family and parenthood has strained their relationship. In general, however, the movie has a strong Romantic worldview.

ADMISSION also has its share of foul language. Finally, although Portia does suffer some drastic consequences when she breaks one or two too many rules, her boss does cover up the incident to retain Princeton’s clean reputation.