AKEELAH AND THE BEE

"Make Manifest the Glory of God" 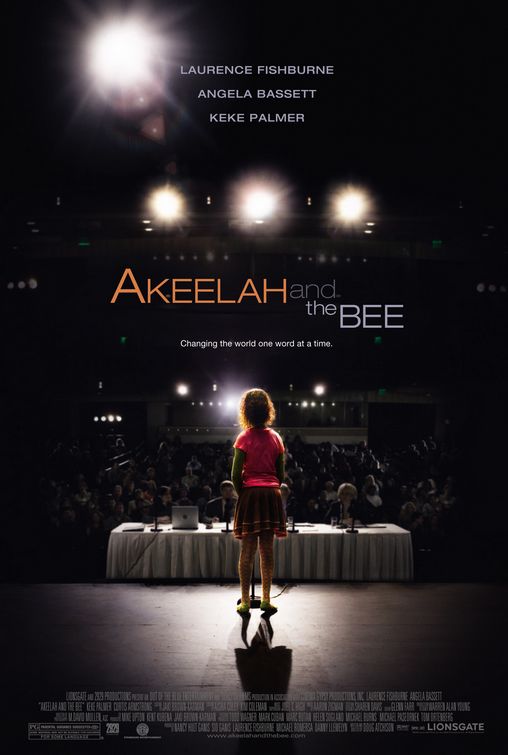 AKEELAH AND THE BEE is an inspiring, entertaining drama. Eleven-year-old Akeelah Anderson feels like she doesn't fit with her classmates at her middle school in a poor African-American section of Los Angeles. Akeelah's classmates make fun of her intelligence, especially her spelling ability. Akeelah wins the school spelling bee contest. Despite the objections of her mother, she decides she wants to go all the way to the finals in Washington, D.C. Akeelah will need help from a tutor, however, if she expects to have a chance. With help from her white principal, she enlists the aid of Dr. Joshua Larabee, a pushy, reclusive black intellectual. Akeelah and Dr. Larabee must overcome the tension between them and other obstacles, but they get help from some unexpected sources.

AKEELAH AND THE BEE is an extremely uplifting movie that will inspire almost anyone who sees it. Keke Palmer is simply marvelous in the lead role of Akeelah. This movie also has a strong moral worldview overall, including a strong, positive reference to the "glory of God." The movie contains some PG-rated foul language, however, and other minor flaws. MOVIEGUIDE(r), therefore, advises caution for younger children.

(BB, C, P, Ro, LL, M) Strong moral worldview with some positive Christian implications, including a positive scene encouraging the heroine to "make manifest the glory of God," and a positive view of American culture and the American pursuit of excellence, mitigated slightly by a Romantic, liberal view of education, some weak or flawed parental figures, and a case of lying and disobedience that is rebuked; 12 obscenities (one "s" word, a few "h" and the rest light) and zero profanities; no violence, but distant and nearby sounds of sirens at night in heroine's urban setting; no sex, but children kiss cheeks twice; no nudity; no alcohol; no smoking; and, a case of lying and disobedience is only partially rebuked, father verbally browbeats son into winning, and movie portrays weak or flawed parental figures in favor of a teacher and a principal as positive role models, but teacher and principal show respect for heroine's mother.

AKEELAH AND THE BEE is an extremely uplifting and entertaining movie that will inspire almost anyone who sees it. It is one of the very best movies of the year so far and probably will remain high on that list by the time the year is finished.

Eleven-year-old Akeelah Anderson feels like she doesn’t fit with her classmates at her middle school in one of the poorer African-American sections of Los Angeles. Akeelah’s classmates make fun of her intelligence, especially her spelling ability.

The white principal of Akeelah’s school, Mr. Welch, is struggling to bring in additional money to her failing school. He makes a reluctant Akeelah participate in the school’s spelling bee contest for the Scripps National Spelling Bee.

Akeelah wins the school contest. Despite the objections of her mother, she decides she wants to go all the way to the finals in Washington, D.C. Akeelah will need help from a tutor, however, if she expects to have a chance. With help from Mr. Welch, she enlists the aid of Dr. Joshua Larabee, a demanding, reclusive intellectual. Akeelah and Dr. Larabee must overcome the tension between them and other obstacles, but they get help from some unexpected sources. Along the way, Akeelah inspires almost everyone she meets, including her tutor.

As shown by the wonderful documentary SPELLBOUND, spelling bees can be dramatic contests, especially at the state and national levels. AKEELAH AND THE BEE adds to this drama by contributing a well-written, award-winning script by a relative but talented unknown, director Doug Atchison. An excellent cast helps flesh out the script’s interesting, unique characters, especially Keke Palmer, who plays Akeelah. This is one movie where the child star is the glue that holds the story together. In fact, all the child stars in this movie do a superb job. That’s a credit to the director as well as adult veterans like Laurence Fishburne, Angela Bassett and Curtis Armstrong, who play the movie’s major adult roles.

Despite some light foul language and weak parental figures, AKEELAH AND THE BEE has a strong moral worldview with some positive Christian implications. In one important scene, Akeelah’s tutor has her read a quotation about personal empowerment and achievement. The quotation includes a statement that human beings should “make manifest the glory of God.” This scene is one of several moving scenes in the movie. The quotation is repeated during the movie’s climax, but without the reference to God. The movie’s ending would have been even more powerful if the God reference had been included there, but, even so, the ending is still very inspirational.

One of the movie’s more interesting themes is the idea that people can be inspired by educational competitions like a spelling bee. This theme is couched in a positive view of American culture where, in even the poorest of neighborhoods, people can rise above their circumstances if they have a positive attitude about themselves and if they help one another. That’s a powerful message indeed.

Watch AKEELAH AND THE BEE: