ALL EYEZ ON ME

"A Messy Biopic of a Messy Life" 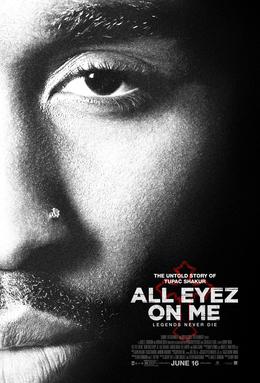 ALL EYEZ ON ME is a biopic about the renowned rapper Tupac Shakur, who was murdered at the age of 25 and has sold 75 million records. Made famous for his controversial and edgy songs in an era when ‘Gangster Rap’ was popular, ALL EYEZ ON ME fails to provide compelling or helpful perspective on the conflicted life of Tupac. It follows his life as a child of parents high up in the Black Panther party, to his start as a rapper, rising fame and untimely death.

ALL EYEZ ON ME has a disastrously messy beginning, making almost five different time jumps in several minutes, shifting tone far too quickly. The filmmakers are so intent on protecting Tupac’s legacy that they find any way of defending his obvious, undeniable personal problems. Tupac’s mother warns him that “they,” the white power, will give Tupac all the tools he needs to destroy himself. So, in the end, Tupac’s violent outbursts and misogyny aren’t his own fault. Because of the constant stream of foul language, violence and lawlessness, ALL EYEZ ON ME is ultimately abhorrent.

(PaPaPa, CoCo, C, LLL, VV, SS, NN, AAA, DD, MM) Very strong pagan worldview, with characters reveling in lawlessness, blame shifting and failure to take responsibility for one’s own actions, plus main character in real life was a communist, but the only connection shown in the movie was the influence that the Black Panther party had on him and some Christian elements like crucifixes, Gospel songs and Bible quotations in rap songs; over 290 obscenities (including at least 150 “f” words), 16 strong profanities, and the middle finger is used many times; strong violence includes multiple stabbings (with blood), gunshots (with casualties), a man is tortured at a dinner table, fist fighting, multiple men are beaten up; strong sexual content includes man receives oral sex in the middle of a club (no nudity), man wakes up with three naked women in his bed, implied fornication in one other situation, and sexual discussion in songs, including one rap song talks about a young girl, who got molested and had to become a prostitute to support the baby; upper and rear female nudity at parties, women in underwear, skimpy outfits, and bikinis, upper male nudity; heavy drinking throughout; lots of smoking and drug use (including cocaine), though main character stays away from cocaine because of his mother’s addiction (she eventually got clean); and, bad reflection of law enforcement, racism and vengeful music lyrics.

ALL EYEZ ON ME is a biopic about the renowned rapper Tupac Shakur who was murdered at the age of 25, but has sold 75 million records. Made famous for his controversial and edgy songs in an era when ‘Gangster Rap’ had rising popularity, ALL EYEZ ON ME fails to provide a compelling or helpful perspective on Tupac’s conflicted life.

The movie opens with a journalist interviewing Tupac, who’s incarcerated and wants to tell his story. Tupac was raised by parents, who were very involved in the Black Panther Party. His mother, Afeni, was acquitted of over 150 charges of “conspiracy” while pregnant with Tupac sister. Raised by his single mother in Baltimore, where Tupac was actually childhood friends with actress Jada-Pinkett Smith of TV’s GOTHAM, Tupac and his sister are eventually sent to live in Oakland because his mother can’t provide for them because of her drug addiction. In California, Tupac starts pursing music and eventually lands his own solo record deal and his first movie acting role.

Tupac begins to rise as a rap superstar, and makes both friends and enemies with legends like Nas and Notorious B.I.G. His personal life, however, is a mess. At times unfairly targeted by the police, and other times prone to violence and fights, Tupac finds himself arrested many times, which forces him to spend a lot of money just on lawyers. Tupac is also lumped in with many other rappers in criticism of their music condoning misogyny and sexual violence. It culminates to a case where Tupac is accused and convicted of sexual assault, a charge he denies.

Eventually, Death Row Records owner Suge Knight offers Tupac a record deal while Tupac is still in prison and helps get him out early. With Death Row, Tupac rubs shoulders with up and coming rappers like Snoop Dogg and Dr. Dre. Having made many enemies by this point, Tupac attends a Mike Tyson boxing match in Las Vegas but is shot and killed in a drive-by shooting. His legacy, however, continues to live on through his music.

ALL EYEZ ON ME has a disastrously messy beginning, making almost five different time jumps in several minutes and shifting tone far too quickly. First time actor Demetrius Shipp Jr. brilliantly portrays Tupac, but can’t save the poor writing. While the movie STRAIGHT OUTTA COMPTON glosses over some of the most negative aspects of their subjects, ALL EYEZ ON ME shows both the positive and negative qualities of Tupac. That said, merely showing Tupac’s life isn’t enough to convey his significance, which the movie ultimately fails at doing. Poor direction, editing and concert scenes with bad lip syncing make this expensive biopic fall flat.

Frustratingly, the filmmakers are so intent on protecting Tupac’s legacy that they find any way of defending or denying his obvious, undeniable personal problems. After the Vice President condemns Tupac’s violent lyrics on national television, Tupac’s mother warns him that “they,” the white power, will give Tupac all the tools he needs to destroy himself. So, in the end, Tupac’s violent outbursts and misogyny aren’t his own fault, he’s just a product of a society that wants to tear him down, which of course is preposterous! Looking back, interestingly, it’s hard to imagine any of the superstars of Gangster Rap in the late 1980s and early 1990s, let alone any musical artist at all, becoming more famous and popular with the messages they were condoning.

Because of the constant stream of foul language, violence and reveling in lawlessness, ALL EYEZ ON ME falls into the abhorrent category and isn’t acceptable entertainment for any moviegoer.