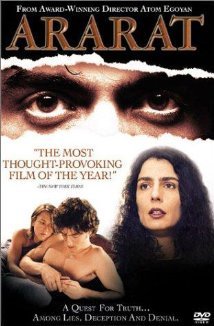 ARARAT is a superb, profound movie by a gifted director, Atom Egoyan, which recounts the story of the Armenian holocaust, one of the worst cases of genocide in recorded history. The movie is based on true events of the sad history of the Armenian Genocide that started on April 24, 1915 in the Turkish Ottoman Empire and resulted in the killing of over 1.5 million innocent people. This complex tale weaves the many stories of Raffi and Celia, an established movie director, a Canadian customs agent, his son Philip, and Ali, whose story lines come together to tell one plot.

ARARAT is marred by a needless, prolonged sex scene. The wartime violence, rape and stripping of the women can be excused as portraying the truth of history, but the sex scene could have been done in a way which would have given the movie a greater audience. The movie also serves to agitate people to take up arms. Several Turkish and Arab reporters, as well as many sympathizers, were insulted by the movie, but it’s a must-see-movie for everyone who does not understand the history of the persecution of Christians and Jews by Muslims.

(CC, BB, Pa; L, VV, SSS, NN, A, DD, M) Overt Christian worldview about the Armenian holocaust where Turkish Muslims slaughtered 1.5 million Christian Armenians in 1915, with the last few lines of Lord’s Prayer, many crosses and religious art and artifacts, a lot of moral messages, and an anti-homosexual subplot, as well as references to luck and to father’s ghost which could refer to memory not poltergeists; 5 obscenities and 3 profanities; wartime violence including bombs exploding, people losing limbs, people shot, people beaten, and women raped; unnecessary blatant adolescent fornication scene, and women abused and raped in war; upper female nudity in sex scene and women stripped and forced to dance naked by Turkish soldiers; alcohol; smoking and pot use; and, lying to customs officer.

ARARAT is a superb, profound movie by a gifted director, Atom Egoyan. Atom said at the Cannes Film Festival that he made this movie to chronicle the process of understanding the story of his family when he was in his teens, and also to perpetuate that important story. The movie is based on true events of the sad history of the Armenian Genocide that started on April 24, 1915 in the Turkish Ottoman Empire and resulted in the killing of over 1.5 million innocent people.

The movie is a complex piece of filmmaking that works as a whole.

On one level, it tells the story of young Raffi, played with incredible range and intensity by medical student David Alpay, who is torn between his lust for his stepsister, Celia, played with passion by Marie-Josée Croze, and his mother Ani, played by Arsinée Khanjian in another great performance. The pot-smoking Celia is manipulating Raffi with her sex to get back at Ani for her father’s suicide, which she believes is Ani’s fault. Raffi tries to make sense of the past and his mother’s objections to Celia, pot and their affair, but going to ancient Armenia inside present day Turkey to find the truth.

On another level, it is the story of an established movie director, Edward Saroyan, played by Charles Aznavour, who promised his mother that he would tell the story of the Armenian holocaust. He hires Ani, who is a professor and the author of a book about the famous Armenian painter Arshille Gorky, who is to be a character in the movie.

On another level, it is the story of Arshille Gorky, played brilliantly by Simon Abkarian, who escapes from the holocaust to tell the story and who eventually committed suicide because he could not live with the horror of it all.

It is also the story of a Canadian customs agent, David, played with deep intensity by Christopher Plummer, who is heartbroken that his son, Philip, is homosexual. David tries to teach his grandson about God, against the wishes of Philip, the boy’s father.

The story of Philip’s lover, Ali (played with great understanding by Elias Koteas), comes to light when he is asked to play the villainous Turkish commander in the movie within the movie, due to his Turkish background.

To pull off this balancing act and bring all these threads together is praiseworthy, and the applause at Cannes Film Festival was well deserved. The dialogue plays a great part in holding these strands together.

One problem in the movie is the needless, prolonged sex scene between Raffi and Celia. The wartime violence, rape and stripping of the women can be excused as portraying the truth of history, but the scene of Raffi and Celia could have been done in a way that would have given the movie a greater audience.

This movie is intended to agitate people to take up arms. ARARAT, in this regard, pulls no punches. It even shows the rape of mothers by the Turks while the children watch. Several Trukish and Arab reporters, as well as many sympathizers, were insulted by the movie. Perhaps, this is necessary. Atom Egoyan says that people must atone for their past sins. Even so, the agenda of these movies will be to inflame passions, not quench them.

ARARAT is a must-see-movie for everyone who does not understand the history of the persecution of Christians and Jews by Muslims. Rather than take up arms, however, Christians who see it need to spread the Good News of Jesus Christ, rather than the bad news of retaliation and revenge.