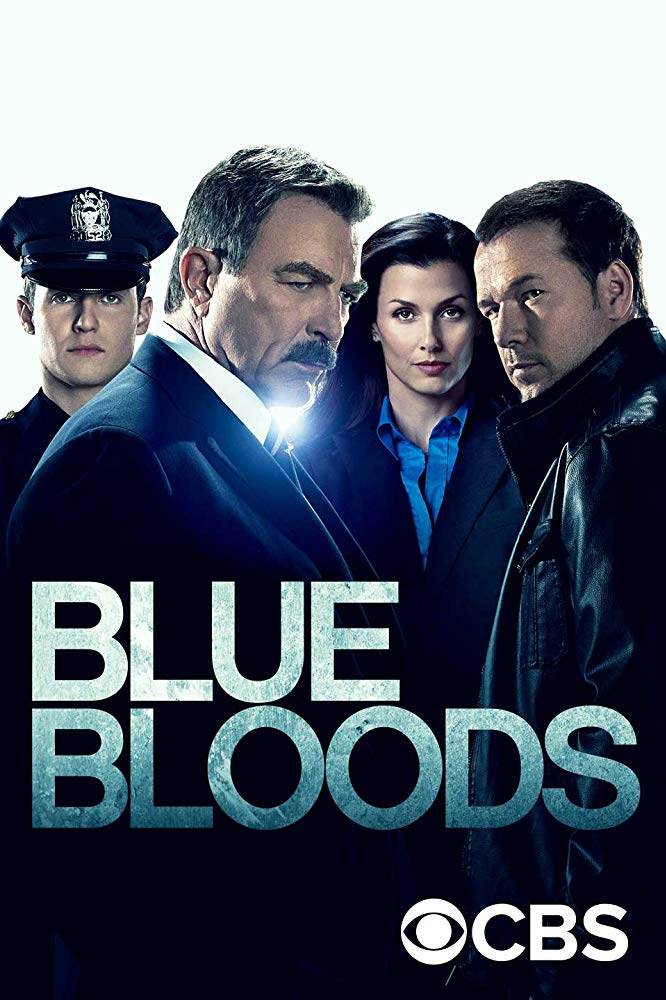 The “Hold Outs” episode of the BLUE BLOODS television series involves three stories that play well off each other. Jamie Reagan and his partner are investigating a series of gang muggings targeting senior citizens living in a neighborhood of apartment buildings. Meanwhile, Jamie’s older sister, Erin, is assigned a carjacking murder case that’s just ended in a hung jury. While swearing in a young police officer, whose life he saved as a baby, their father, Police Commissioner Frank Reagan, answers questions from the press. They want to know why the re-elected mayor has yet to ask Frank to continue as police chief.

All the separate plots in BLUE BLOODS: Hold Outs are compelling. They also have compelling twists. The writing, direction, editing, and acting are excellent. Even better, all the stories are held together by a strong Christian, Pro-American, moral worldview. Included are positive references to Jesus, prayer and studying the Bible for solutions to personal problems. Also, positive police work is extolled. “Hold Outs” does contain some foul language and references to immoral behavior, however. So, caution is advised for older children.

(CCC, BBB, PPP, PC, LL, V, S, M) Very strong Christian, moral worldview in a Catholic context about depending on a cardinal as a spiritual advisor, who gives the lead hero of a family of heroes passages from Scripture to study regarding a problem at work involving the mayor, with an emphasis on doing the right thing, seeking justice, and protecting and serving other people, with a very strong Pro-American view of police and police work, including positive comments about protecting life, changing lives and paying good deeds forward, plus a politically correct line about Sarah Palin not being able to answer foreign policy questions very well; 10 obscenities (mostly “d” and “h” words) and three light profanities, including a comment using “Lord knows” in a light comment that can also be taken in a positive manner; light violence includes a foot chase, gang members pull knives on senior citizens, but police are there in two instances, a car is burning as a result of arson, talk about a murder during a supposed carjacking, talk about the murdered body of a female witness having been found; no depicted sex, but an adulterous affair is revealed during the investigation of two murders, a missing prostitute is being sought as a crime witness, and a widow passionately kisses her apparent lover; no nudity; no alcohol; no smoking or drugs; and, tension between two attorneys in the District Attorney’s office, and police chief is upset about being disrespected by the mayor who’s been re-elected but has yet to come to the chief to offer him to stay on the job.

The “Hold Outs” episode of the BLUE BLOODS television series is one of the better episodes of the police drama in a couple years. Set in New York City, the story involves a series of gang muggings of some senior citizens, a new investigation of a murder case that resulted in a hung jury, and the police chief’s new conflict with the mayor who’s just been re-elected. All the stories in BLUE BLOODS: Hold Outs are compelling, with some nice twists, and all of them together feature a strong Christian, moral worldview with a positive view of American justice and American police.

The episode begins with Officer Jamie Reagan and his female partner, Eddie, pose as an elderly couple to capture some gang members targeting senior citizens in one small neighborhood of apartment buildings. They capture three gang members, including two lookouts, but the fourth gang member who pulled the knife on Jamie and Eddie gets away. Jamie suspects there’s more to the story than just some random gang muggings.

Meanwhile, Prosecutor Erin Reagan has been given a carjacking and murder case that just resulted in a hung jury. Erin’s female rival in the DA’s office has fumbled the case, and Erin’s upset she has to clean up the mess. After interviewing the murdered victim’s wife and the disgruntled black juror who caused the hung jury, Erin discovers another witness, a prostitute, disputed the wife’s story.

Finally, while swearing in a young police officer, whose life he saved as a baby, Jamie and Erin’s father, Police Commissioner Frank Reagan, answers questions from the press. The press wants to know why the newly re-elected mayor has yet to ask Frank to continue as police chief. It becomes clear that Frank is so upset about this that he’s thinking about saying no if the mayor asks him to stay.

All of the separate plots in BLUE BLOODS: Hold Outs are compelling. They also have compelling twists. Kudos should also go to the direction and editing, which mixes the stories superbly. As always, the acting is excellent and extremely believable. The good guys are heroic and appealing despite their flaws. All the characters are well delineated, even the minor ones.

Even better, all the stories in the “Hold Outs” episode are held together by a strong Christian, Pro-American, moral worldview. Included are positive references to Jesus, prayer and studying the Bible for solutions to personal problems. After being sworn into office, the new police officer, whose life the police chief saved, makes a wonderful short speech about a policeman’s duty to protect life and change lives for the better. His speech is reflected in Jamie’s investigation of the gang muggings and in Erin’s investigation of the carjacking and two murders. During the Reagan family’s Sunday meal, Frank reveals that, as is his practice, he’s asked his friend the cardinal’s advice for his conflict with the mayor. He winsomely reveals the cardinal gave him several biblical passages, so now Frank has to study the passages to find the solution to his little problem. This scene ends with a Christian prayer in the name of “Christ our Lord,” and the whole episode ends with a celebration of the birth of a baby. Taken all together, these stories extol justice, service to others, doing the right thing, and Christian life, faith and prayer.

This episode does contain some foul language. It’s mostly light, but it warrants a caution for older children. Also, the black juror Erin interviews tells her he doesn’t trust white people and doesn’t trust lawyers, so she has two strikes against her as far as he’s concerned. He points out to Erin, however, that the original police report shows there was a second witness, who says the carjacking killer was white, not black as the wife contends. The second witness happens to be a missing prostitute, and her murdered body is later found. This casts suspicion back on the murdered victim’s wife. Erin figures the wife probably didn’t kill her husband herself, but had an accomplice do it. Finally, Erin makes a politically correct comment about Sarah Palin answering foreign policy questions when she describes her second interview with the widow.